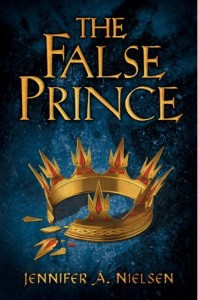 THE FALSE PRINCE is the thrilling first book in a brand-new trilogy filled with danger and deceit and hidden identities that will have readers rushing breathlessly to the end.

In a discontent kingdom, civil war is brewing. To unify the divided people, Conner, a nobleman of the court, devises a cunning plan to find an impersonator of the king’s long-lost son and install him as a puppet prince. Four orphans are recruited to compete for the role, including a defiant boy named Sage. Sage knows that Conner’s motives are more than questionable, yet his life balances on a sword’s point — he must be chosen to play the prince or he will certainly be killed. But Sage’s rivals have their own agendas as well.

As Sage moves from a rundown orphanage to Conner’s sumptuous palace, layer upon layer of treachery and deceit unfold, until finally, a truth is revealed that, in the end, may very well prove more dangerous than all of the lies taken together.

An extraordinary adventure filled with danger and action, lies and deadly truths that will have readers clinging to the edge of their seats.

Stand alone or series: Book 1 in the Ascendance Trilogy

Why did I read this book: I’ve heard nothing but good things about The False Prince, mostly from traditional review outlets and trade publications like Kirkus, PW, and the IndieNext list. I haven’t, however, seen many blogger reviews for the book, which naturally intrigued me even more. When I received an ARC, of course I had to review it.

An orphan and gifted sneak thief, fifteen year old Sage has managed to get by since the death of his barmaid mother and drunken musician father. Passed from orphanage to orphanage, Sage has a wry but upbeat outlook on life. He steals what food he must to survive, and doesn’t get caught. Well, he manages to talk his way out when he is caught. Most of the time.

Returning from his last unsuccessful heist (word to the wise: stealing a hot full roast is no small feat, since fresh meat is slippery), Sage finds a stranger and nobleman waiting for him at the orphanage – a nobleman that has purchased Sage for a treacherous, even traitorous, plot. A high ranking and ambitious regent, Lord Conner forcibly takes an unwilling Sage back to his estate along with two similar-looking young men – both of whom are also orphans, and both of whom also look very much like Sage.

The kingdom of Carthya is on the brink of war with its neighbors, and Conner has been forced to take a desperate last gamble to preserve peace (while simultaneously installing himself in a position of power, naturally). He reveals to Sage, Tobias and Roden that the King, Queen and Crown Prince Darius have been murdered – a truth that has been kept under wraps to buy Conner time to put his plan into action. While there is no heir apparent, there was one other prince who stood to inherit the throne – an impetuous nine year old named Jaron, Darius’s younger brother, who was sent away from court because of his trouble-causing antics. When Jaron’s ship was attacked by pirates four years earlier, the young prince was written off as lost forever. It is Conner’s plan to bring Jaron back from the dead with one of the orphan boys he has selected and groomed for the job as his puppet monarch.

Sage wants nothing to do with becoming King of Carthya, nor does he wish to participate in Conner’s masquerade and serve as his figurehead King. But obey, or at least appear to obey, Sage must, for Conner is ruthless and will stop anyone that stands between him and his mission. To not be chosen as the false prince means certain death, as Conner’s is too large a secret to hide.

There are many familiar elements to The False Prince, from the trained puppet pretender to the throne aspect, to a sort of prince and the pauper kind of vibe. Of course, the most direct and immediate comparison is to that of Megan Whalen Turner’s much beloved The Thief (but more on that in a bit). For all the the elements of the novel are familiar and the twists predictable, I absolutely ADORED this book and devoured it in a single sitting.

So what makes The False Prince so fantastic and memorable? The bulk of the responsibility for this success has to lie with the writing style and the character of Sage himself. The danger facing Carthya is imminent and believable, and the tensions that divide the kingdom with power hungry Regents – such as Conner – are wonderfully well-drawn. The story proper hinges on the selection of the false prince, which, interestingly, Sage has no desire to become (though readers know and root for his selection, of course). While there isn’t really any doubt that Sage is going to become the prince, he tries his hardest to rebel against Conner’s plot at great personal cost and injury. This can be infuriating at times, but all becomes clear – especially regarding Sage’s motives – as the novel progresses.

Of course, there’s Sage’s voice itself, which truly drives the book. Narrated in the limited third person with insight only to Sage’s thoughts, one can’t help but fall in love with the brazen, smart-mouthed orphan and thief. And here is where the comparisons come in: Sage’s voice and the story of The False Prince at large is incredibly similar to Megan Whalen Turner’s The Thief and there are undeniable similarities between her Eugenides and our own Sage. But…truth be told? I like Sage and his story a whole lot more.

Hear me out. I truly enjoyed The Thief and The Queen of Attolia but lacked any real emotional connection to either Eugenides or his Queen. In The False Prince, though, that connection I so desperately wanted in the aforementioned novels was finally forged – there’s something about Sage’s cocky attitude, with his big heart and sharp intellect that completely won me over from the very beginning. And that’s to say nothing of Sage’s true story behind his brazen facade – but therein lie spoilers! Beyond Sage, the secondary characters are also fantastic, and I love that not everyone is what they seem from first glance. Our initial perceptions of characters are not always correct, and I love that turnaround in the novel, particularly as it applies to the snooty Tobias, the cunning Conner, and the servant Mott. I felt like the conclusion of this book, too, was incredibly satisfying and well-executed, complete with the equivalent of a parlor reveal scene and an undeniably irresistible hook for the next book in the series.

The False Prince is the best book I’ve read in 2012 thus far, and I absolutely cannot wait for book 2 in the series. Wholeheartedly recommended.

If I had to do it all over again, I would not have chosen this life. Then again, I’m not sure I ever had a choice.

These were my thoughts as I raced away from the market, with a stolen roast tucked under my arm. I’d never attempted roast thievery before, and I was already
regretting it. It happens to be very difficult to hold a chunk of raw meat while running. More slippery than I’d anticipated. If the butcher didn’t catch me with his cleaver first, and literally cut off my future plans, I vowed to remember to get the meat wrapped next time. Then steal it.

He was only a few paces behind now, chasing me at a better speed than I’d have expected for a man of his girth. He yelled very loudly in his native language, one I didn’t recognize.

He was originally from one of the far western countries. Undoubtedly a country where killing a meat thief was allowed.

It was this sort of thought that encouraged me to run faster. I rounded a corner just as the cleaver suddenly cut into a wood post behind me. Even though he was aiming for me, I couldn’t help but admire his throwing accuracy. If I hadn’t turned when I did, the cleaver would’ve found its target.

But I was only a block from Mrs. Turbeldy’s Orphanage for Disadvantaged Boys. I knew how to disappear there.

And I might have made it, if not for the bald man sitting outside the tavern, who stretched out his foot in time to trip me. Luckily, I managed to keep hold of the roast, although it did no favors to my right shoulder as I fell onto the hard dirt road.

The butcher leaned over me and laughed. “ ’Bout time you get what’s comin’ to you, filthy beggar.”

As a point of fact, I hadn’t begged for anything. It was beneath me.

His laughter was quickly followed up with a kick to my back that chased my breath away. I curled into a ball, prepared for a beating I wasn’t sure I’d live to regret. The butcher landed a second kick and had reared back for a third, when another man shouted, “Stop!”

Reading Next: I Hunt Killers by Barry Lyga

The Magnificent 12 Blog Tour: The Call & The Trap by Michael Grant