Hey, hey, it’s Hugo Award nominee Renay, visiting from Lady Business to tell us all why we should read Black Wolves by Kate Elliott. 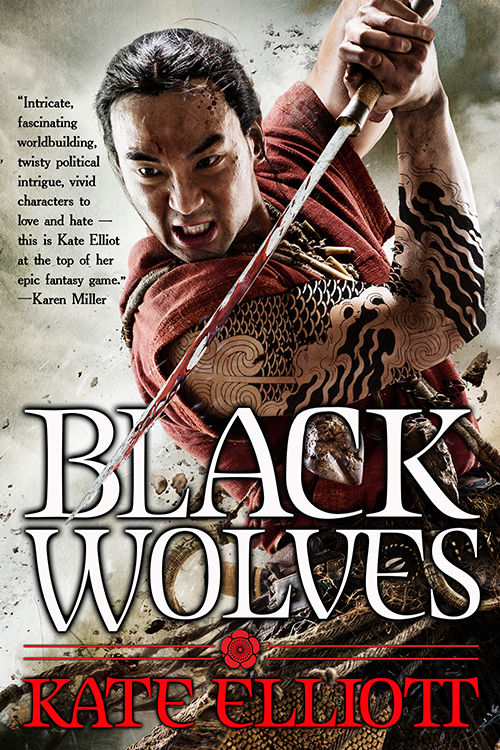 Kate Elliott has written a ton of fantasy.

I was introduced to her work by this very blog when they mentioned Kate Elliott’s Spiritwalker trilogy (thanks again, Book Smugglers!). I had never heard of Kate Elliott, seen Kate Elliott’s books on a shelf, or been recced a novel by Kate Elliott until that mention. I was unaware and ignorant and I was about to have my literary world rocked by some alternate history steampunk featuring quality friendship between girls, an arrogant, clothes-obsessed mage, and talking dinosaurs who practice law.

I started there and continued through Elliott’s backlist. It’s a large backlist. In fact, I am so determined to finish it I made a bingo card for it to track my progress. SHOCKING TWIST: I need another card already because she’s still putting out rad books (Poisoned Blade, the second book in her Court of Fives series, comes out this August). 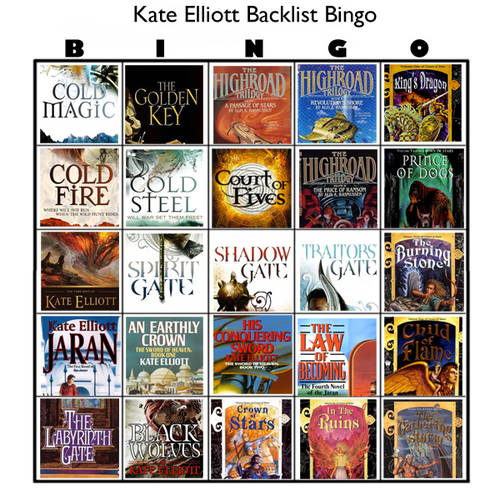 I have a ways to go to cover this card, but I am determined because Kate Elliott quickly became one of my favorite authors after I inhaled Cold Magic. Her stories are layered, her worlds feel rich and expansive, her characters complicated, and women take up space in the narrative in ways I am deeply hungry to see in my science fiction and fantasy. Their lives, interests, and struggles are integral to the stories Elliott tells. They aren’t moved by the plot. They move because they influence the plot. Women are active agents in Elliott’s work and can’t be suppressed, erased, or imagined away by the reader. They must be considered as full and real characters because the narrative treats them as full and real characters.

With all the things I love about Elliott’s storytelling in mind, I awaited the release of Black Wolves, the beginning of a new series set in the world of her Crossroads trilogy, like I was that teenage Backstreet Boy fangirl waiting on the latest album. (I was more excited for Black Wolves FOR SURE. SORRY KEVIN). Then I got an early copy and was STOKED. But I was so overwhelmed by my feelings for the book that I tried to back out of reviewing it because I was certain I wouldn’t be able to get through it in time and do it the justice it deserved.[1.Uhhh except I’ve reviewed it a few times since then, including this Perfect Gem of an opinion. You’re welcome, world! PS. Read Black Wolves.]

There was no objectivity in how I felt about this novel. In fact, there’s no objectivity in this review, either. I am giving it 10,000 stars, or 10/10 on the Book Smugglers rating scale, or 17 space bees (high honor!) or or or or

Now that my rating has been spoiled we’re all on the same page on my lack of chill over Black Wolves LET’S BEGIN.

I am Emotionally Compromised by my love for this book and all the great work Elliott is doing inside it like the master of critical storytelling she is. This book is about legacies and social change and family. This book is about the intersections of politics and gender and religion. This book is a conversation with epic fantasy and a direct challenge to the waves of people who claim “historical accuracy” to erase people of color, women, older protagonists, and historical nuance from fantasy literature and replace it with an imaginary, white-washed, patriarchal past. This book is a gauntlet thrown by a woman writer who has written inside a genre that has repeatedly said it doesn’t want her or the type of stories she’s telling. I will go to war for this book and this author. This book is my Helen because it’s everything I want from epic fantasy and I am UNASHAMED.

EXCEPT, you know, I’m not gonna scoop it and take it home with me and hoard it away from everyone. I’m going to press recommendations for it on everyone who loves epic fantasy and go, “COME FEEL ALL THESE EMOTIONS WITH ME.”

Black Wolves begins in the past, as Kellas, a young, strapping lad, breaks the law in order to prove a point to his bros. Instead of being summarily dispatched to a painful death by the king, Anjihosh, he is instead brought on to serve Anji and his family. We meet the son, Atani, who will rule one day, and Dannarah, the headstrong girl already chafing against the restrictions placed on her by society. We learn small details about this family, we learn Atani’s secrets, and we see the loyalty Kellas gives not to Anji as king, but to Atani himself.

Then we move 44 years into the future. Atani is dead, Kellas has exiled himself for failing his king, and Dannarah is left as our sole connection to the pages we spent with Kellas. She’s a strong figure in a kingdom divided by factions, but she’s watching her power and influence dwindle as greedy men seek to silence her for good and erase everything her beloved father worked so hard to accomplish.

If this story belongs to any one character, it is Dannarah, who has carved out a space for herself as a reeve Marshall, one of the leaders who helps run the affiliation of reeves and their giant Justice Eagles who move around the world helping out with local issues. The influence of the reeves is fading, and Jehosh, Atani’s son, has demoted Dannarah from Chief Marshall and left her in a place of reduced political power. Dannarah is the fuel that creates the momentum of the central story: she discovers Lifka, another supporting character and changes the course of Lifka’s life with her connections and launches another narrative thread that will slowly spool out into the larger political landscape. She reaches out to Kellas, to bring him back into the fold to help the struggling kingdom. She challenges the social changes she can see slowly inching over the kingdom her father saved, over and over. Through her choices and decisions we meet a woman who is complicated and stubborn and flawed. She’s blinded by the love of a father she lost and a brother she still mourns, and even so late in life, she’s learning things about her past that change and challenge her. Living in complicated political times is difficult; Dannarah’s story is the embodiment of that difficulty.

The secondary stories, between Gil and Sarai, overlap with the main players, but largely intertwine with Kellas’s thread of the narrative. Gil’s family has been routed because of their involvement in Atani’s death. He lives underneath the constant pressure to restore them through political alliance. Sarai is a young woman trapped in a restrictive patriarchal structure and abusive family because of her mother’s choices when she was only a baby. They come together in an arranged marriage that’s nothing like either of them expect, and get caught up in the same political struggles Dannarah and Kellas are working against. Most importantly, their relationship to the narrative remains equal: Sarai doesn’t vanish into Gil’s narrative. Her role in the story continues, and shows the depths and horror of politics as played by women vying for power. It’s no less bloody or cruel, no less complicated, and it’s centered in not only political influence but bodily autonomy. Sarai, much like the younger Dannarah we meet at the beginning of the story, is struggling against some of the same restrictions: the right to choose her own path and to live her life by her own morals.

If Black Wolves sounds complicated that’s because it is. Elliott weaves a narrative together from beginning to end that contains politics and social changes over the course of decades, only piecing together the results of her story toward the end for those who haven’t made the connections yet. There are no easy answers or unearned reveals. The pace is steady and firm like the slow march of time and history. The rewards are not necessarily surprising revelations (although these exist) but instead watching the world of the Hundred take shape, seeing through the eyes of both the young and the old, in order to compare what was with what exists now. The story ends on a note of change for everyone; nothing can stay the same and not one of our characters can remain complacent. Black Wolves is the inexorable ease toward a larger conflict that takes its time to place each piece where it needs to be. Everyone has to make a choice on how to move forward and none of those choices are easy or consequence free.

Black Wolves does what I love to see epic fantasy do successfully. It builds a society that feels solid and intricate and uses that to reflect historical nuance: messy, difficult, complicated, beautiful, hopeful, terrifying, and heartbreaking in equal measure. Nothing is easy because life isn’t easy. But happiness, justice, and optimism exist. In Black Wolves, it argues that they can be earned.

Black Wolves is a solid, 780-page block of sophisticated epic fantasy that rewards close reading and patience and is well worth your time. Black Wolves is available from Orbit right now. You can get it now. You can read all the pages starting now. Or check your local library. Libraries are great! Unless they don’t have it and then you should ask them to order it so they can acquire this Relevant and Important Piece of Fantasy Literature by Noted SFF Author Kate Elliott.