Title: For A Few Demons More 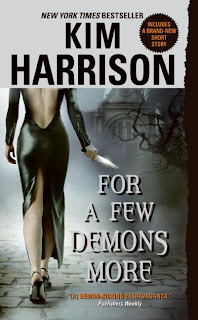 Why did I read this book: I love Rachel Morgan. Kim Harrison is my hero. The first four books were absofreakinglutely brilliant. Need I elaborate further?

Summary: (from Amazon.com)
Despite dating one vampire and living with another, Rachel Morgan has always managed to stay just ahead of trouble . . . until now.

A fiendish serial killer stalks the Hollows, claiming victims across society, and the resulting terror ignites a vicious Inderland gang war. And while the ancient artifact Rachel is hiding may be the key to stopping the murderer, revealing it could also create a battle to the death among the numerous supernatural races that live in and around Cincinnati.

For every action has its price, and when the vampire master Piscary is set free and the demonic Algaliarept dares to walk openly under the sun, even Rachel Morgan can’t hide forever.

I have to admit to something–I actually read this book months back. I went on a Rachel Morgan reading binge after reading Dead Witch Walking that culminated in more than a few sleepless nights, catching up just in time for the (then) new release, The Outlaw Demon Wails (which I will get around to reviewing someday soon. Promise!). And I know this isn’t exactly fair, but in retrospect, I can safely say that this book is my favorite of the series, and one of my Desert Island Keepers.

Each of the Rachel Morgan books builds on the last, raising the stakes to impossibly high levels–and For A Few Demons More ups the ante even more. After dealing with idiot ex-boyfriend Nick and getting her partner and good friend Jenks back his son Jax, Rachel finds herself in possession of ‘The Focus’–that is, a nasty 5000 year old curse that gives werewolves the power to “focus” and combine their strength and packs. Should the focus fall into were hands, the entire hierarchy of Inderlanders would be turned on its head, as the weres could challenge the vampires for dominance in the city. Rachel must hide the ugly bone-encased curse, and she turns to her friend–werewolf and insurance claims investigator–David Hue for its safekeeping (David also happens to be Rachel’s Alpha…for health benefit reasons, she’s his packmate). Meanwhile, a string of murders hits Cincinnati, and Rachel (and her agency, Vampiric Charms) is enlisted to help find the killer…especially when all signs point to her Alpha, David.

Rachel also faces some BIG problems from the Demons that keep threatening to yank her into the Ever After. When Newt (remember her as the immensely powerful demon from A Fistful of Charms) shows up on hallowed ground and somehow manages to de-sanctify the church that Rach, Ivy and Jenks call home, the shit has officially hit the fan. Add to the equation the involvement of Trent Kalamack (whom Rachel can’t seem to give a break), Rachel’s strange ability to twist demon curses (adding more smut to her already streaked aura), and some seriously pissed off vampires–Piscary is back and scarily at large…and we’ve got a party!

All these seemingly separate plotlines come together in a dramatic–and heartbreaking–climax, as Rachel is forced to make some hard choices. Unlike the other books, true tragedy occurs in For A Few Demons More as no one comes out unscathed, and lives are lost.

I cannot stress enough my awe and wonder at Kim Harrison’s storytelling. She continues to write these stories without becoming cliche or trite, and taking each installment in a new, unexpected direction. In most longer series’, I come to expect that all the characters I love will eventually get themselves out of whatever pickle they have gotten into, more or less unharmed. This book hit me like a sledgehammer–I felt like I was watching LOST for the first time, when Boone died.

As always, the relationships, the mess that is Rachel and Ivy–and Kisten–is beautifully done. After Ivy (finally) bit Rachel in A Fistful of Charms (albeit with disastrous results), I was anxious to see what this would mean, and how their already turbulent relationship would progress. The tables have turned here as Rachel wants to find a blood balance with Ivy–her reasons make sense once you know Rachel and her desire to make Ivy feel loved (in a friendship way)–but Ivy is the one who refuses now, unable to separate blood and love from sex. And then Ivy’s old roommate and lover shows up–who also happens to be Piscary’s attorney. Talk about complications. And meanwhile, Rachel’s relationship with Kisten takes on a welcome, much heavier tone.

This is an intricately plotted book, with characters that are wholly, incredibly real. Rachel Morgan, as usual, makes some of the worst decisions ever–but her intentions, her empathy and dedication to her friends is what drives this character, consequences be damned. Rachel tries to reconcile her “addiction to danger” in this book–which is a foolhardy addiction, but at the very least we must give her props for trying to work around it. Many minor characters from previous books (well, no one character is ever “minor” in Ms. Harrison’s stories) make reprisals here, and again we see that everything that has happened in the past–be it a product of Rachel’s decisions and bargains, or of other characters’s actions–has dire consequences in the future.

The intricate plot, the highest quality characters, the incredible stakes and growth here all make this book near perfect in my mind. My favorite Urban Fantasy title, from a storyteller of the highest caliber. I loved it.

Notable Quotes/Parts: Gaah, the final showdown, as it were. Rachel has EVERYTHING on the line, and must pull off a deal gone wrong, demon curses, and the possible loss of someone very, very important to her. The tension is staggering.

Additional Thoughts: *points at title* Yay, another Leone shout out. I recently read that Urban Fantasy is the modern western–and how aptly titled this book is, to reflect the sentiment.

Verdict: This is, to date, my favorite Urban Fantasy novel. If you haven’t started this series, I implore you, get on board already.

Reading Next: Huntress Year One by Ivory Madison