Book Review: The Orphan of Awkward Falls by Keith Graves

Title: The Orphan of Awkward Falls

When thirteen-year-old Josephine moves to Awkward Falls she can’t help but snoop around the dilapidated mansion next door. She finds a little more than she bargained for when she is captured by the strange characters who live there: an ancient automaton who serves as a butler, a cat patched together with a few odd parts, and most surprising of all, a boy named Thaddeus Hibble. Meanwhile, the most feared patient in the Asylum for the Dangerously Insane is on the loose. Fetid Stenchley has escaped in the most dramatic fashion, and there is only one thing on his mind…revenge. Unfortunately for Thaddeus and Josephine, he’s headed their way. Can these unlikely friends stop Stenchley before he destroys them all? Full of hilariously spooky details, surprising twists, and haunting black and white illustrations, Keith Graves delivers a suspenseful and engaging first novel. Inspired by the classic tales of Frankenstein and mad scientists, with a splash of contemporary technology, the wonderfully tense action and gory descriptions will hook boys from the start, while Josephine provides a clever and unique heroine that girls will adore.

How did I get this book: Both Ana and I received ARCs at BEA

Why did we read this book: We were walking around BEA this year and decided to visit Chronicle’s booth, where Ana basically stumbled on a box with copies of this book. It looked so awesome that she snagged one for herself and then dragged me over to pick one up as well.

Thirteen year old Josephine Cravitz is determined to be mad. Her parents have uprooted her yet again – just as she was getting used to life and friends in balmy Madison, Wisconsin, she’s forced to move to what she thinks of as the Arctic Circle (aka the far reaches of northern Manitoba, Canada). In the small town of Awkward Falls, renowned for its sauerkraut (a strange-smelling delicacy for which there is a festival each year) and proximity to the Asylum for the Dangerously Insane, Josephine fully expects to be utterly bored for the remainder of her summer vacation. But when the family pulls up to their new home, an awesomely foreboding and deliciously mysterious mansion full of secrets from the past, Josephine has a hard time maintaining her act of sullen malaise. The first night in the her home Josephine sees a strange figure from her bedroom window and decides to investigate only to be taken prisoner to the dilapidated neighboring mansion by a rusty automaton. It is here that she meets her neighbor Thaddeus Hibble, a paranoid boy genius/mad scientist in training with a penchant for too many sweets and no personal hygiene. With no parents and only a robot butler named Norman and a talking, reanimated cat named Felix as his lone companions, Thaddeus has spent his days sleeping and his nights concocting mad and brilliant experiments. Josephine’s arrival throws Thaddeus’s peaceful – if unhygenic and not exactly happy – life into a tailspin, though, when she volunteers to help him discover the truth of his parents, grandfather, and his past.

As if things weren’t bad enough, there’s the matter of Fetid Stenchley – the most notorious and dangerous killer ever to be imprisoned in the neighboring Asylum. The cannibal Stenchley has escaped his prison and has one destination on his mind: the home of his former master (whom Stenchley murdered and partially ate), genius scientist Celsius T. Hibble – Thaddeus’s grandfather.

Of all the books in the lineup this week, The Orphan of Awkward Falls was my most highly anticipated. I love the blend of the macabre with comedy, and Mr. Graves’s novel had the promise of both in spades. Not only did the book have promise, however, it also delivered. The Orphan of Awkward Falls is one part Rick Yancey and one part Neil Gaiman, with notes of Roald Dahl in the mix. In short, I loved this book.

From a storytelling perspective, The Orphan of Awkward Falls is both charming and gruesome and all the more wonderful for its ability to temper darker themes with madcap hilarity. From the opening scene, this wonderful alchemy of the funny and the horrific sets the tone of the book, as the novel begins with the truly horrific and darkly funny “treatments” being inflicted on our villain, Fetid Stenchley in the Insane Asylum. In the style of Roald Dahl (who actually wrote some very scary stories when you stop to think about them), The Orphan of Awkward Falls continues with this irresistible combination of darkness and comedy – it’s in the sadness of a very lonely boy living in a dilapidated home overrun with vermin and mold and all kinds of nastiness, but also in the comedy that said lonely boy’s genius inventions and mad-scientist-in-training crazy attitude provides.

From a pure plotting perspective, there are many wonderful plot twists and turns over the course of the book – if you, like me, have a few pointed questions that you can’t shake early on in the book, I urge you to stick with it. ALL is explained in due course (and it’s all brilliant, too). I want to say more, but therein lie spoilers and I would not dream of depriving you, dear readers, of that journey. Rest assured that there are revelations aplenty in The Orphan of Awkward Falls, each one more dramatic than the last.

Just as the story was fantastic so too are the characters – in fact, it is the characterizations that make this book sing. I adored heroine Josephine with her true-to-tween calculated coolness, with her wonderful aubergine hat (appropriately named Eggplant), with her love of yoga/organic/health conscious living and her love for her parents. I loved Thaddeus and his hilarious petulance and his ability to simultaneously seem much older and much younger than his age (surely a byproduct of growing up as a genius with only an ancient automaton and a cat for company). I loved the slick, cool cat Felix with his 1930s gangster voice, and Norman the robot with a penchant for modern television and film. I even loved Fetid Stenchley and his Cynthia (the snake that lives in the hump on his back and urges him to eat people) – in a ‘I-love-you-cuz-you’re-a-great-character way, not in an I-love-you way. While Fetid Stenchley may be the most villainous insane criminal of all time, Mr. Graves gives him deeper layers and even some sympathy. When we learn about Cynthia, and when we learn about why Fetid is the way he is, it’s a sad thing.

I honestly can’t think of anything that I didn’t like about this wonderful book. The Orphan of Awkward Falls is a fantastic middle grade novel that delivers both laughs and chills, sure to be a hit for reluctant younger readers and more seasoned older ones alike. Absolutely recommended.

The boy glared at Josephine suspiciously. “Who are you, and what are you up to? Are you a spy sent by the orphanage? Did the man in the black suit put you up to this?”

He was the unhealthiest looking kid Josephine had ever seen. His marshmallow-pale skin made her wonder if he had ever been outdoors in his life. She winced at the boy’s neglected teeth, which were badly in need of a patient dentist. His uncombed white hair showed no evidence of having been shampooed in recent months. His unclipped fingernails were dirty, his thick glasses smeared with fingerprints, his too-large white jacked and trousers spotted with stains from numerous sloppy meals. The boy was overweight, under-exercised, and smelly.

Josephine found him repulsive, yet somehow interesting, like some long-forgotten cheese discovered at the back of the refrigerator.

Additional Thoughts: Keith Graves, the author of this book, is also the accomplished author and artist behind a number of picture books. My ARC of this title had some first pass sketches throughout the book which were a little odd because they were so unfinished. Here’s a sample of the author’s prior artwork: 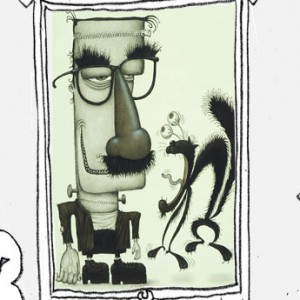 I cannot wait to see how the final version of The Orphan of Awkward Falls turns out.

Rating: 7 – Very Good, and in the running for my favorite MG book of the week!