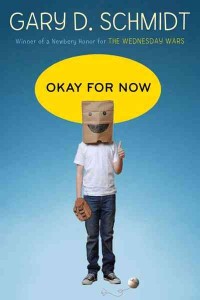 Midwesterner Gary D. Schmidt won Newbery Honor awards for Lizzie Bright and the Buckminster Boys and The Wednesday Wars, two coming-of-age novels about unlikely friends finding a bond. Okay For Now, his latest novel, explores another seemingly improbable alliance, this one between new outsider in town Doug Swieteck and Lil Spicer, the savvy spitfire daughter of his deli owner boss. With her challenging assistance, Doug discovers new sides of himself. Along the way, he also readjusts his relationship with his abusive father, his school peers, and his older brother, a newly returned war victim of Vietnam.

Stand alone or series: Stand alone but a companion book to this author’s The Wednesday Wars

How did I get this book: Review copy from Netgalley

Why did I read this book: I saw it on NetGalley and it sounded like an Ana-Book (and it so is!) and then VERY positive reviews started to pop up everywhere.

It’s the end of the 60s, humankind is about to take a giant leap and set foot on the moon for the very first time but in stupid Marysville, New York, Doug Swieteck’s life is stuck in the same old rut and nothing of consequence really happens. Financial problems, a father who communicates with his fists, a mother who says very little and two older brothers, both of them jerks and bullies (but at least one is away in Vietnam), problems at school (not that that’s any of our business), Doug’s life is not easy and it’s not supposed to be, as his father is so fond of repeating.

But then something truly momentous happens to Doug – although you or I would hardly think so at first glance – something that will change his life forever: he comes across a book about birds, an Audubon original, sitting at the local library. He is fascinated by the illustrations of the birds and this fascination is two-fold: he is enchanted by the details of the drawings but also by the stories he imagines they tell. It is a mixture of imagination and hopefulness which he can’t quite comprehend, not even when his fingers lovingly caress the borders of the images.

It is then that the second most important thing to ever happen to him comes to pass: people take an interest on him. On a chump like him, if you would believe. First there is the librarian who offers to teach him how to draw and Doug realises how much he wants to learn and after a handful of lessons he notices he is really good at it (although it must be kept a secret from his family. Gods know what his jerk of a brother would do if he ever found out!). Then, he gets a Saturday afternoon job delivering groceries and he makes friends not only with the costumers but also with his boss’ daughter who has beautiful green eyes (not that he notices things like that). And finally, a teacher notices the secret he has been keeping all these years and does something about it.

And then all of a sudden Doug’s life is not a complete misery. He flourishes. He grows up, he falls in love and even goes on a quest of his own to recover the missing pages of the Audubon book.

But things are not all ponies and rainbows: no sir. His father is still a bully and does unspeakable things. His older brother comes back from Vietnam, scarred for life, a changed person; his PE teacher and the Principal would not leave him alone. And people sometimes think that Doug is just like his old man and his brothers: a loser, a jerk with a Criminal Mind. There is mistrust and unfair expectations (that moment when Doug talks, truly talks to his brother and learn that they have more in common than expected).

Reader, I am not lying: if I could have stepped into the pages of this book and take matters in my own hands, I would have. I would have kicked Doug’s father’s ass all the way to jail because that is the rightful place for people like him (what he did to Doug on his 12th birthday is stuff of pure, undiluted nightmare); I would have shaken Doug’s mother and asked her to take a stance; I would have told off people that did not give him a chance and hugged those that did; I would have embraced Doug – just that: embrace him and cuddle him and tell him it will be okay.

But I couldn’t – of course not. All I could do was sit by, see it all unfold and then sit down to write this in the hopes that I can convey the awesomeness of this book. There is the writing, of course: full of cleverness (that moment when one understands who Christopher is; or the Jane Eyre shout outs “Reader, I kissed her”); full of wonderfulness (as each bird drawing is incorporated into the story beautifully); and above all, full of heart (that moment when Doug describes his mother’s smile).

Okay For Now is that kind of book where heartbreak comes together with the means to pull it all back together. There is hope and joy and love as well as tears, hatred and despair. It is a rollercoaster of emotions and it made for the sort of reading in which one can do nothing but to keep on going, hoping for the best, dreading the worst.

Then there is of course, Doug’s voice, unique as he tells his own story the best way he can, even if he keeps some secrets from us, even if he thinks so little of himself at the same time that he allows himself to progress and move on and onwards. And then quotes like this:

“In the whole story of the world, bananas have never once been a special treat.”

And the characters, full of hidden (or obvious) depth and even villains are not two-dimensional and have a lot of scope for redemption.

Not that everything is perfect. The last part suffers unfortunately of what I have come to call the “toomuchness” affliction. When things are added in what feel like an after-though and which I felt were hardly necessary (and I say this because they were not truly developed): there is a last minute tragedy and a silly stunt at a Broadway show. And finally, the complete turnaround and a too-easily-obtained redemption of a character considering that up until that point, said character was basically a psycho. I find myself too unforgiving to believe in redemption at that point but perhaps that is a very personal reaction.

Gary D. Schmidt, how did I not know about you? How did I not know that Okay For Now is a sequel/companion to another book (a Newbery Honor winner!!!) called The Wednesday Wars? It doesn’t matter, that book is already downloaded to my Kindle and shall be read soon.

An in case I wasn’t clear enough: Reader, I loved it.

Notable Quotes/ Parts: I have two quotes that I loved to share:

On Saturday mornings during deliveries, I’d practice picking out new words in Jane Eyre, sounding out the ones that needed sounding out – and I’m not lying, there were plenty. “A new servitude! There is something in that, I soliloquized.”

I mean, who talks like that? Do you know how long it takes to sound out a word like soliloquized? And even after you do, you have no idea what the stupid word means except that it probably just means “said”, which is what stupid Charlotte Bronte should have said in the first place. When I delivered Mrs. Mason’s groceries, she saw that I had Jane Eyre stuck under my arm. “Oh,” she said, “that was my favorite novel in school.” “It was?” I soliloquized.

She came over and looked at the picture. Then she took my hand. You know what that feels like? Like what the astronauts will feel when they step onto the moon for the very first time. Like what might happen if Coach Reed rang the doorbell at The Dump some afternoon and sat down next to Lucas. Like knowing that Principal Peattie is wrong about what he said. Like laying a missing bird picture back where it’s supposed to be. Like someone seeing what a chump you are and getting you a cold Coke anyway. Like Possibility.

Rating: 8 – Excellent leaning toward 9 and a serious contender to a top 10 spot.

Reading Next: Shut Out by Kody Keplinger

Book Review: The World Inside by Robert Silverberg