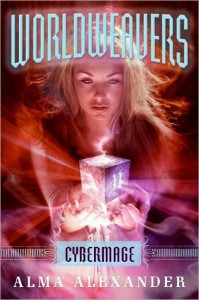 Stand alone or series: Book 3 in the Worldweavers Trilogy

Why did I read this book: I very much enjoyed Gift of the Unmage and Spellspam, so naturally I had to finish the trilogy to see what happens with Thea and her friends!

Summary: (from HarperCollins.com)
This year at the Wandless Academy feels all wrong to Thea. Her best friend, Magpie, will barely give her the time of day. Ben’s been moody and dismissive. Since when did Tess have a boyfriend? And why is Humphrey May, agent for the Federal Bureau of Magic, lurking around the Academy?

Thea is out of sorts—in all ways, magical and otherwise—and that’s before she discovers she’s an elemental mage, a category of magician so rare that only four others are known to exist.

Now the Federal Bureau of Magic needs Thea’s help to unlock the mysterious white cube—the same cube found over the summer in the professor’s house, the same cube the dangerous Alphiri are still after. To stay ahead of the Alphiri and the wiles of the FBM, Thea needs her friends—all of them.

From a world woven with magic and suspense comes Alma Alexander’s Cybermage, the final installment of the richly invented Worldweavers trilogy.

Summer vacation is over, and it’s the beginning of another school year at The Wandless Academy. But this year, things are different for Thea. When she returns to school, her ever-present, loquacious roommate and best friend Magpie has grown into someone different. Instead of sneaking out of their room at night to find injured animals and nurse them back to health with her own magical talents, this new Magpie has discovered makeup, trendy (read: barely-there) clothes, and boys – and while Thea is still her friend, she begins hanging out with a cooler crowd. Meanwhile, Ben still gives Thea the cold shoulder after the previous year’s shenanigans, where he felt left out, Terry is too busy with his new job of maintaining the massive super-server that maintains half of the magical community’s computer access, and Tess is involved in her college-level courses and her secret boyfriend. All around, Thea feels like her group is isolating her and falling apart, and there’s nothing she can do to change things as they all…well, grow up.

But, when Harvey May shows up at the Academy, Thea and her friends must be ready to tangle with magical artifacts and the Alphiri once more. This time around, Harvey has some breathtaking news for Thea – when Diego/Beltran reappeared after the spellspam fiasco (in Spellspam), he had a strange white cube and a number of old fashioned data tapes with him. The cube is a great mystery to the FBM, but they do know that it was crafted by a man named Nikola Tesla – the most powerful mage ever to have lived, and the only quad-elemental of history. The FBM thinks that the cube’s secrets are too powerful to ignore and are hot on the trail to solving its mysteries. Harvey has been to all of the remaining living elemental mages for help opening and deciphering the cube – and all three have been unsuccessful. And this is where Thea comes in, because in Harvey’s estimation, Thea is also an elemental mage – one of only a select few born generations apart, who have mastery over at least one (but possibly more) elements of magic. With Thea’s abilities to weave worlds through computers, to travel between dimensions and alter realities, Harvey believes her to be his last resort to understanding what secrets the box holds. Shocked by the news, Thea decides to help Harvey and the FBM – and she, along with her friends, discover that the cube’s secrets are much more important than they ever could have dreamed. Nikola Tesla’s past is a shaded thing, and his past actions could mean the Alphiri finally gaining the power they so desire – unless Thea and her friends are able to help Nikola change his sad fate with the clues and power he has left behind. But danger surrounds Thea at every turn, and she does not know who to trust – not even Harvey May. And when Thea stopping the Alphiri means finally shedding her protective cover of being a failed, impotent Double Seventh, she needs to know if it is worth the risk.

As I’ve said before, I loved Gift of the Unmage, book 1 of this series. I loved the unique new world of magic, relying not on the usual Norse or European pantheon, but instead looking at Native American magic (in particular, the Anasazi). The second book in the trilogy, Spellspam, however left me a little bit disappointed. I still enjoyed the book and there were undeniably winsome moments throughout (especially towards the end of the book), but the magic and creativity of the first book were sadly missing. So, it was with a mix of trepidation and hope that I began Cybermage…and I loved it. This third novel is a beautiful, fitting end to the trilogy, showcasing a surreal but well-paced plot, characters that change and grow and act and react, and the perfect blend of old and new magic. THIS is everything I wanted from Spellspam that was missing, but back in spades in Cybermage. We finally return to the overarching Alphiri storyline and the heavy involvement of Grandmother Spider and Cheveyo and the Barefoot Road – and though Corey the Trickster plays a smaller role in this novel, he is still around, lurking in the shadows and ready to cause whatever mischief he can. This return to the Anasazi realm of spirit magic felt long overdue, and I loved every second of Thea’s doubts and her trust in these old spirits to guide her true.

While the old magic was fantastic, so too were the new elements introduced here in Cybermage. In particular, the concept of “Elementals” like Nikola Tesla and Thea herself is fascinating. The idea that magic is organic, that it changes as our technology and knowledge changes is a really cool concept and I think one that Ms. Alexander imagines perfectly. For all that Nikola Tesla was (is) the strongest and only quad-elemental mage to ever live, Thea’s new powers, her ability to bend realities and command technology with magic is something completely new that even Tesla could not ever have comprehended. This third book also has loads of palpable danger, tough decisions to be made, and I am happy to report that all are handled beautifully. The plotting for Cybermage is brisk, even, and without any significant missteps – I finished the book in a single setting. Though some might be uncomfortable with Ms. Alexander’s surrealist style and descriptions (realities that pulse in and out through Thea’s minicomputer, the ability to “grab” and weave light and reality around “empty spaces” that only match one specific person as a means of transportation), I loved them and how very unique and different this perspective was.

Even more impressive than the plotting, however, are Ms. Alexander’s characters. Thea, her friends and enemies are fantastic – each character is layered and they do not suffer from the pitfall of series fiction; that is, they grow and change. Magpie in particular is BRILLIANT – I loved the strained relationship between Thea and her old friend as Magpie discovers popularity and boys, while Thea is left by the wayside (by the end of the novel, though, Magpie goes through some major transformations too). Though Tess and Ben again play second fiddle in terms of friends, they also have grown from the devoted motley crew in the first novel – though they are still devoted friends, they have branched out into their own interests, as friends tend to do. Terry, per usual, is Thea’s sidekick for most of the book, and his sensibility – and his trust in Thea – make for a lovely balance, in terms of characters. I also loved the addition of the “Walrus” – that is, Kristen Wallers, so nicknamed for her unfortunate, faele-gift (curse!) of prominent snaggle teeth. Again, the Harry Potter similarities are undeniable, but I felt these similar relationships actually worked to the novels strength. On that note, I think it’s incredibly cool that Harvey May is examined more and his motives are picked apart in Cybermage. There are questions that Thea is forced to ask about who is really on her side, and through Harvey’s character, I liked that these provocations were addressed. Benevolent mentors are all fine and great, but it’s so much more interesting when there are dual motives involved.

So, in summation, I really liked Cybermage. It’s an absolutely fantastic book; fast paced, high stakes, and an open enough ending to hope for more from Thea and her friends in the future….?

“There you are,” Humphrey May said, sitting in the armchair by the window, sipping a mug of steaming coffee, as Thea and her friends blinked into existence in the middle of the Professor’s study. Rafe, engrossed in perusing the Professor’s bookshelves, turned and gave them a grin and a small wave. Tess dug Thea in the ribs with an elbow.

“And who’s he?” she whispered into Thea’s ear. “You didn’t mention there’d be perks.”

Thea glared at her, and Tess dropped her eyes, a smile playing around the corners of her mouth.

“Mrs. Chen just stepped out for a moment, but she’ll be right back,” Humphrey said, putting aside his coffee and getting up. “In the meantime…”

“Is that the cube, sir?” Terry asked, eyeing the briefcase on the Professor’s desk.

“Yes, do come and have a closer look. Thea, how did you want to play this?”

“Pick it up, it isn’t as fragile as it appears,” Humphrey said.

Magpie sucked in her breath briefly.

“What do you want us to do?” Terry asked, craning his neck.

You can read the first EIGHTY pages online thanks to Harper Collins’ great Browse Inside feature, too:

Additional Thoughts: Make sure to stay tuned, as later today we have an interview with Alma Alexander, and she gives away an autographed copy of Cybermage!

Verdict: A rousing, effective final volume in the Worldweavers Trilogy, I loved Cybermage. Definitely recommended – this is one very different series that is worth checking out if you want a change of pace from the usual wand and wizardry young adult fantasy!

Reading Next: Girl in the Arena by Lise Haines