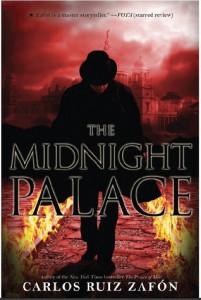 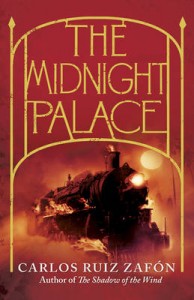 In the heart of Calcutta lurks a dark mystery….

Set in Calcutta in the 1930s, The Midnight Palace begins on a dark night when an English lieutenant fights to save newborn twins Ben and Sheere from an unthinkable threat. Despite monsoon-force rains and terrible danger lurking around every street corner, the young lieutenant manages to get them to safety, but not without losing his own life. . . .

Years later, on the eve of Ben and Sheere’s sixteenth birthday, the mysterious threat reenters their lives. This time, it may be impossible to escape. With the help of their brave friends, the twins will have to take a stand against the terror that watches them in the shadows of the night–and face the most frightening creature in the history of the City of Palaces.

Stand alone or series: Stand alone although it’s being published in English as part of a “series” . But all four YA books that he wrote have no connection with each other, really, as far as we know.

How did we get this book: Review copies from the publisher in the US (via Netgalley)

Why did we read this book: We both loved The Shadow of the Wind so much. Plus this sounded right up our alley.

Ana: Carlos Ruiz Zafon’s The Shadow of the Wind is one of my favourite books of all time and I have been an avid reader of his books ever since. However, truth be told, every subsequent book has been hit or miss for me. I didn’t like The Angel’s Game and The Prince of Mist was a good read but nowhere near as good as Shadow. When I picked up The Midnight Palace I was a bit anxious to see which side of the spectrum it would fall. And it pains me to say that this book is filled with stock characters, contrived plotting and lazy writing (it is ALL telling, no showing). It is bad folks, really, really bad. To the point where I am starting to wonder if The Shadow of the Wind wasn’t a one-hit wonder (like Come on Eileen or The Final Countdown). [1. I totally just showed my age]

Thea: I, unfortunately, have to concur with Ana. I, too, loved The Shadow of the Wind and was so excited to read Mr. Zafon’s efforts in the young adult realm of literature. The Midnight Palace, however, was shockingly – nay, appallingly – bad. While the idea behind the story is interesting, the writing is insultingly lazy, and the character development non-existent. I was not even able to believe in the setting of the book, which is indicative of how poorly cobbled together this novel is. The worst part of all? I know exactly what Carlos Ruiz Zafon is capable of, and I cannot help but feel like this was a book written for pure exploitative/cash-making purposes, as opposed to an honest-to-goodness attempt at writing a piece of literature.

Thea: From a pure plot perspective, the underlying idea for the story behind The Midnight Palace is solid. A pair of twins in 1930s Calcutta are separated at birth to evade the evil that has destroyed both of their parents, only to meet up again 16 years later when that same evil wakes again, hungry with vengeance and fueled by a murderous rage. The idea of a secret society of orphans that grew up together, meeting in an abandoned mansion in the heart of Calcutta – that’s all great, compelling stuff.

But in reality, The Midnight Palace is one big fat mess of lazy writing. More of an outline than an actual novel, the entirety of the background, buildup and action in this story are relayed through characters talking about the past. Much in the way that Teri Hall’s atrocious The Line relied on school lessons to tell a story, Zafon’s Palace uses a wizened old grandmother, occasional library research, and an epistolary reminiscing narrator to tell the story, point-blank. I cannot convey how utterly frustrating this is for me, as a reader. I don’t want you to tell me the story as though we are sitting around a campfire on our first girl scout camping trip; I want you to show me the story through your writing. I don’t want an outline of all the things that happened to these children and their parents; I would rather see that first-hand, for myself, and form my own opinions and draw my own conclusions.

Beyond the laziness of the storytelling, there were other problems that I took serious issue with. First, there is the overall plausibility level of the story. How believable is it that a group of Indian orphans from straight off the streets would be so well spoken or granted access and freedoms to things like detailed library records and old newspapers, in 1930s Calcutta no less? For all of Carlos Ruiz Zafon’s liltingly beautiful prose, I couldn’t quite buy that this was India (as opposed to somewhere in Spain or London). Though the history of the city is detailed in the book, the descriptions felt oddly disjointed and hollow. What about the stickiness or heat of the city? The sights, sounds and smells? The language (because it seems that everyone is speaking English, which is understandable given the legacy of British colonization, but there’s no mention of Bengali)? I haven’t even said anything of the big twist reveal at the climax of the story, or the ridiculously contrived way that Ben and his sister have to defeat their tormentor (there are BOXES involved). I won’t go there. It’s that frustrating.

There are also the obvious thematic similarities between this early novel and The Shadow of the Wind. The hidden/unknowing siblings. The naive/deprecatingly “normal” narrator. The grotesque man changed by fate, hatred, lost love and FIRE.

Needless to say, I was not impressed.

Ana: Neither was I. I think this is the sort of book that gives Young Adult novels a bad name in some circles because of its trite storytelling and its condescending nature.

The plot is SO contrived and FULL of holes. In one instance, the main characters’ grandmother info-dumps about things that she could not possibly have known. Plot developments are unbelievably forced: for example, when the members of what is supposed to be a SECRET club invite someone they barely just met to join their ranks. Of course, that someone proves to be Important later on. Details are thrown in without any regard to how they fit in the story. And the amount of suspension of disbelief required from the reader when it comes to what these orphans can accomplish whilst living in an orphanage in the 30s is off the radar.

The writing has its moments (but maybe that’s due to the awesome skills of the translator, Julia Graves?) but since the majority of the story is put forth via awkward info-dumping, the beauty of it gets buried under that heavy load. Although there is a certain noir atmosphere and some sense of terror, again – and it seems I can’t repeat this enough – the amount of telling overshadows everything else and removes any real gumption from the story.

I finished reading this and I thought: oh well, that read like a bad Sherlock Holmes case.

Thea: The characters of The Midnight Palace reflect the plot’s lackadaisical writing and execution. The ragtag group of orphans, banding together to find answers and save their friends are caricatures, talking puppets, that never evolve or become believably real. There’s Ben (the manic, brilliant leader), Michael (the artist), Ian (the narrator/aspiring doctor/nonthreatening good boy), the token female member (a brilliant and vivacious actress), the boy in the throes of unrequited love with her, and so on and so forth. I have nothing against stock characters so long as they are developed in a believable manner. But these characters are not developed at all. We are simply told “Michael is an artist and he is quiet and moody” and that is that. Of course, there are also the older characters that form the heart of this little melodrama. Jawahal, the big fire-breathing bogey man, has an interesting (if completely predictable) past – I only wish that his and the parents’ story was shown to readers, instead of being parroted at us through Storytime with Grandma.

Ana: Yes, what Thea said. Stock, underdeveloped characters each fitting into common stereotypes like The Artist, The Leader, The Spunky Girl etc, who never grow beyond what we are TOLD about them at the start. The villain on the other hand has quite the interesting past but he undergoes the most pathetic change of heart since Darth Vader goes all softie at the end of The Return of the Jedi.[2. Thea’s Note: The return of Anakin at the end of Episode VI is not a pathetic change of heart! It was touching and cathartic and not lame at all because he was REDEEMED AND THAT IS THAT. *sobs dramatically* Then again, his character arc was developed beautifully over three films – and that is sooooo not the case with Tom Marvolo Riddle/”I Am Lord Voldemort” Jawahal. I’m not even spoiler tagging that because the book is THAT ridiculous.]

I don’t really have much to add. I disliked The Midnight Palace so much that I find myself struggling to find the will to even write this review.

Ana: As you can probably tell by now, this was not a good reading experience for me: I was in fact quite angry by the time I finished it. I think this is the sort of book that gives YA a bad name but more than that, I felt frustrated because it read as though the author could not be bothered to actually WRITE the story further than a first-pass outline. NO, scrap that. Since so many similar tropes are used later in The Shadow of the Wind, it feels like The Midnight Palace is a trial, to see if his ideas are worth developing.

Thea: 3 – Yep, it’s pretty bad; only escaping a lower grade because the prose is occasionally lovely, and underneath all the crap storytelling I could find the nugget of what was a Good Idea

Reading Next: After The Golden Age Carrie Vaughn