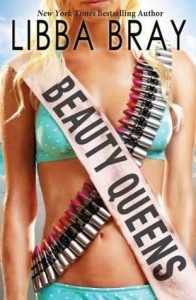 The fifty contestants in the Miss Teen Dream Pageant thought this was going to be a fun trip to the beach, where they could parade in their state-appropriate costumes and complete in front of the cameras. But sadly, their airplane had another idea, crashing on a desert island and leaving the survivors stranded with little food, little water, and practically no eye liner.

What’s a beauty queen to do? Continue to practice for the talent portion of the program – or wrestle snakes to the ground? Get a perfect tan – or learn to run wild? And what should happen when the sexy pirates show up?

Welcome to the heart of non-exfoliated darkness. Your tour guide? None other than Libba Bray, the hilarious, sensational, Printz Award-winning author of A Great and Terrible Beauty and Going Bovine. The result is a novel that will make you laugh, make you think, and make you never see beauty the same way again.

How did we get this book: ARC from the publisher & publicist

Why did we read this book: Both of us loved Going Bovine, Libba Bray’s previous novel that won the prestigious Printz Award. Both of us love Lost. Ergo, when we heard that Libba Bray would be writing a book that would blend one of our favorite television shows in a satirical cocktail of consumerism, Lord of the Flies, and pageant princesses, we were HOOKED.

Unfortunately, for the both of us, Beauty Queens could not deliver. The following is a Book Discussion post – not a true review – as Thea had to DNF (“Did Not Finish”) it, though Ana did struggle through to the bitter end.

Thea’s Take: Beauty Queens is the story of a group of contestants for the Miss Teen Dream Pageant – sponsored by The Corporation – and what fate befalls them when their airplane crashes on a not-so deserted island. Armed only with their sashes, evening gowns and stilettos, the would-be Miss Teen Dreamers must survive the clutches of giant snakes, bad dudes with big guns, an Evil Dictator, corporate espionage, pirates, and, of course, each other.

Billed as a satire, Beauty Queens is Libba Bray’s attempt at an ironic, mocking explication of modern day America – an attempt that, in this reader’s opinion, fails. Unfortunately, I found Beauty Queens to be a painful and pointless endeavor, with all the significance and longevity of a spray-on faux tan. The way I see it, satire is meant to be bitingly funny but subversive, inviting readers to laugh but also challenging them to think about the subject matter at hand. Beauty Queens is neither witty nor subversive. Instead, Ms. Bray’s latest novel is relentlessly heavy-handed and unfunny, overwritten, and insulting to a reader’s intelligence as the concepts being satirized/messages preached in Beauty Queens are hardly challenging or groudbreaking, and are presented in a patronizing manner. Consumerism is bad! Reality TV is rotting our brains! Beauty Pageants are misogynistic and shallow! Rather than satirical, Beauty Queens reads like a bad parody – call it the difference between an hilariously cutting romp, like Team America, and a slapstickish, mawkish puddle of drivel, like Dance Movie or Meet the Spartans.

My main beef with Beauty Queens is simple: I took offense to how mind-numbingly obvious and tediously overt the book’s message and characters read. Praytell, where is the satirical wit in portraying a group of beauty queens as incessantly vapid, bleached, tanned, and toned bimbos (including one who happens to be named Tiara)? In the repeated footnotes and chapter breaks that show the obscene, over-the-top pitfalls of triple action depilatory/shaving cream? In naming a boyband singer J.T. Woodland (Justin Timberlake, get it?!), or an Insane Dictator MoMo B. ChaCha (that’s a funny name like Kim Jong Il, get it?!)? In having a beauty-pageant winning, queen of the gun-totin’, protecting-America-from-them-terrorists Ladybird Hope running for President (OMG Sarah Palin, get it?!)? And these aren’t the only stereotypes exploited. There’s the young Indian contestant repping California that is a single-minded overacheiver, a Texas bossypants pageant monster (southern drawl included), an intelligent but abrasive Jewish contestant (who is only there to publish the TRUTH about the pageant, naturally), a chick from Michigan that is – OMG – good with mechanical stuff (who also, of course, happens to be a WNBA loving lesbian)…

The thing is, there is no elegance or metaphor to Ms. Bray’s novel. There is nothing really clever, insightful, or even funny (beyond the cheap laughs) about Beauty Queens. Instead of a scathingly witty Stewart or Colbert-ish skewering of society, Beauty Queens is obvious, capricious and preachy. And I didn’t even mention the lack of cohesive plotting or direction for the novel. While I agree with the concepts and key ideals that Ms. Bray asserts in this book (as, I assume, would anyone with a basic education), the execution of these ideas was sorely wanting. Also – why is it that beauty contestants (or cheerleaders, or models, or whatever) are always portrayed in this same derisive way? Even if the girls “learn to love themselves” at the end, why is it the default thinking that girls who enter pageants (or act as cheerleaders) must be shallow/stupid/etc? How much more interesting would this novel had been if it had taken a Bring it On type of stance and examine American fascination with pageantry from a different angle, or beauty/body image/reality television from a less obvious point of view?

I stuck with Beauty Queens for as long as I could, but there’s only so much a girl can take. Life is simply too short to waste on books that don’t do it for you. Chalk this one up to a big, fat, disappointing fail.

I read Beauty Queens to the bitter end think Thea nails it when she calls it a bad parody because that’s exactly how I see it, too. The aim might have been satire, but I believe Beauty Queens misses the target completely. As far as I understand the style, satire is supposed to intelligently ridicule outrageous human behaviour by allowing readers to reach their own conclusions. However, the author basically masticates every single point she makes in the novel and the reader has to do no thinking whatsoever because all the ideas are presented on a silver platter.

But satire is not the only thing that the story tries to be. If only. I would actually propose that Beauty Queens is a much bigger mess than Thea hinted at. There is a side of satire (of beauty contests, of reality TV) and a dash of parody (pirates! The Corporation! The bad dictator!) but towards its middle the book actually deviates from both of these forms and tries to be a serious Contemporary novel. And a Contemporary novel about important issues (body image, female empowerment, sexual and racial diversity) and with a VERY preachy (yet worthy) message at its core: to accept oneself.

Every single character starts out as a stereotype (which I understand is the point of satire) but at some point, the majority of these characters have a flashback moment and a subsequent “revelation” to illustrate that NO, they are NOT stereotypes! They have a past! That explains how they’ve become who they are right now! They are real people! These flashbacks are clumsily incorporated into the story (seriously, in one scene a girl is sinking into quicksand, and while another is trying to rescue her, she finds herself thinking about her past. That might have worked in Lost, but not so much here) and read like episodic entries to explain each girl’s transformation. More than that though, the attempt to subvert stereotypes doesn’t really work when each girl becomes less of a character and more of an ideal representation of one. And that is not cool either.

Each of the main characters learn something about themselves and the world but in a very episodic, clumsy, detached and preachy way. A few examples follow, in chronological order.

Take this conversation between Petra (The Transsexual) and Tiara (The Not-so-Smart):

“You have a wang-dang-doodle!” Tiara squeaked.

And the girls found they could not answer. For they’d never been asked that questions in the pageant prep.

Or when they are all sitting down for a talk:

”Why do girls always feel like they have to apologise for giving an opinion or taking up space in the world? Have you ever noticed that?” Nicole asked. You go on websites and some girl leaves a post and if it’s longer than three sentences or she’s expressing her thoughts about some topic, she usually ends with, ‘Sorry for the rant’ or ‘That may be dumb, but that’s what I think.’”

And then there Sosie’s (The Bisexual) musing on her sexual orientation when asked if she was gay:

Sosie wasn’t sure how to answer. Since she could remember, she’d had crushes on both girls and boys. They were person-specific infatuations – Brian Levithan’s wicked sense of humor was every bit as sexy as Valerie Martinez’s sweet smile and amazing krunk routines. It seemed odd to Sosie that she had to make some hard-and-fast decision about such an arbitrary, individual thing as attraction, like having to declare an orientation major: I am straight with a minor in gay.

or Shanti (The PoC) on being assimilated:

I’m not Indian enough for the Indians and I’m not American enough for the white people. I’m always somewhere in between and I can’t even seem to make it to either side. It’s like I live in a world of my own. Shantibetweenland.

And so on and so forth. You get the idea.

And THAT is my greatest gripe about the novel: there are the basic bones of a story here somewhere but no connective tissue to link all of the things that the novel tries to be. And when you can’t form a cohesive, coherent body all that’s left is a shapeless story where the message it tries to convey trumps everything else.

It is the weirdest thing to be writing a negative review of this book. This is a book that embraces and celebrates sexual and racial diversity; that celebrates feminism and female empowerment; whose main “message” is to accept and embrace oneself. I agree with all of these values, and I agree with all the messages contained in this book. But I set out to read a novel, not a manual on how to be an awesome girl. I get the message and I agree with it 100%, I just don’t have to be indoctrinated to it. That is simply not good storytelling.

Additional Thoughts: So, we Smugglers weren’t enthralled with Beauty Queens – but that doesn’t mean that the book won’t work for you. Want a chance to win a copy and an island survival guide? Make sure to check out our Beauty Queens Official Giveaway for your chance to get some free swag.

Reading Next: The Midnight Palace by Carlos Ruiz Zafón

Over at Kirkus: Technomancer by B.V. Larson