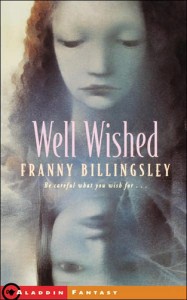 One wish for a lifetime…

In the village of Bishop Mayne there is a magical Wishing Well where a person may make one wish in a lifetime. But the Well can create problems for those who use its power, for wishes often go wrong. It was just such a wish that took all the children in the town away. Only eleven-year-old Nuria, who lives with her grandfather up on the mountain, remains.

Then one child returns — Catty Winter. Catty’s legs are mysteriously crippled, and Catty desperately wants Nuria to make a wish so she can walk again. Nuria swears she will make the wish for her friend. But the Well has a mind of its own. What if Nuria’s wish goes wrong?

Why did I read the book: Because I recently discovered, and fell in love with, this author’s books. Chime which was released earlier this year, has a secure spot on my top 10 of 2011.

In the mountain town of Bishop Mayne, there is a Wishing Well that grants wishes to its villagers under three rules:

One must be careful what one wishes for because the Well is tricky and will make wishes go wrong whenever it can (for the Well loves to have fun). The last wish-gone-wrong made all children but one (a girl called Catty who didn’t disappear but who became ill overnight and lost the use of her legs on that same day) disappear from the town and their families follow suit in search of them.

Nuria, who had recently arrived to live with her grandfather, the Avy, didn’t disappear because technically their mountain house is not in the town. She is an orphan who lived many years with an aunt who was not particularly nice and is still getting used to being so completely loved by the Avy, just as she is which is what she always wanted. The second thing she wants most in the world is a friend and the Avy makes a wish asking for the families to return to the village.

Something goes wrong though as only one family comes back: Catty’s. But that’s ok with Nuria, because one friend is enough for her. She and Catty become fast friends, even as the two girls don’t have a lot in common. But then Nuria realises something terrible that she will have to share the Avy with Catty and she is so jealous and possessive that she impulsively does what she was not supposed to: she makes a wish and it goes terribly wrong and she ends up changing bodies with Catty and now Nuria has one month to revert the wish.

OH how I ADORE this author’s writing! I fell in love with her book this year after reading the fabulous Chime and with every book I read subsequently, I found things to love and to treasure. In Well Wished, it was the loving, dedicated relationship between Nuria and her grandfather as well as Nuria herself. The first is exemplified in the games they play, the songs they sing, the intimate jokes they share and how for example every time she came inside the house he would say to her:

Won’t you take off your coat and stay a while?

and she loved it because even though she knew he wanted her to stay forever and not only for a while, she felt relieved to hear him say this every time she came through the door. This is the sort of thing that is so beautiful it breaks my heart.

Because of her sad past, it is easy to understand this side of Nuria that needs constant reassurance but it needs to be said that she might come across as an unlikeable heroine. If on one hand, she is awesome and creative (she loves make believe and constantly talks as though she is at court, like when the Avy tells her to close the door she will reply: “at once, my sovereign liege!”) and fierce, on the other hand she is prone to petty jealousy and even though she wants a friend more than anything in the world she does not wishes to share things with her. To me that makes Nuria extremely believable and I loved her even more for those things. She is far from being perfect.

Now, it is not all ponies and rainbows: I found that even loving the characters and the writing so very much, I couldn’t get past two things: one was the niggling thought at the back of my mind that it made no sense that the entire town basically lived hostage to this Well. WHY? Why would everybody simply accept the way the Well did things? If things were so terrible after the families moved out WHY did people stay behind when nothing prevented them from leaving? WHY did people keep wishing for things? Perhaps this is an observation about human nature and how people always struggle with the idea of getting things easily with only a wish but still…

The other one was that I kept wondering (and still am, days after reading the novel) if Nuria – as awesome as she is – wasn’t portrayed as an Excepto-Girl (© Book Gazing). The sort of girl who is portrayed as inherently better than other girls by comparison, when the other girl likes things that are too “girly”. Because even with her considerable jealousy and pettiness, I felt that Nuria came across as being better than Catty because even if she was not perfect at least, she was not vain like Catty and didn’t like “girly” stuff like dresses, dolls, sewing etc. this is definitely something that bothered me and I thought I should mention.

Well Wished is the début novel by Franny Billinsgley and as such it is a very good book with some of the elements I dearly love about her books but it is not nearly as good as her later novels The Folk Keeper and Chime. Still worth a read though.

Notable Quotes/Parts: this is the sort of thing that only Nuria would think (this happens after she changes bodies with Catty:

”I did so eat a bite,” said Nuria, “but it doesn’t taste the same.” Catty’s tongue was different. It shrank away at the taste of salt, and now she couldn’t find that place where sharp cheese exploded with a wonderful ping!

Reading next: Huntress by Malinda Lo