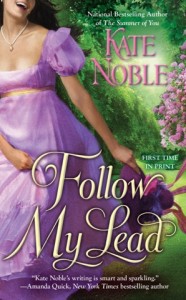 Jason Cummings, Duke of Rayne is feeling the weight of his responsibilities – one of which is to get married. Being the most sought after bachelor in London can be trying, so who can blame him if he seeks refuge from the voracious hordes of young debutantes at the decidedly female-free Historical Society? Female-free, that is, until Winnifred Crane marches up to the door, demanding entrance.

Despite her prowess as a historian, Winn is denied membership the Society. So she daringly offers an unusual bargain: if she can prove the authenticity of a certain painting, she’ll be granted recognition, fame, and respect. But to do that, she must go abroad. And to go abroad, she must have an escort, even a stubbornly unwilling one…

Jason has no desire to accompany Winn on her adventure across Europe, but even he is not immune to Winn’s passion for her profession. As the journey proves more difficult than planned, they must work together to stay one step ahead of their rivals…. and the closer they get to the proof Winn seeks, the closer she and Jason become. But as their adventure turns dangerous, can Jason keep this headstrong bluestocking safe? And what will become of their growing bond when the adventure ends?

Stand alone or series: Stand alone but hero has appeared in Summer of You – he was that book’s heroine’s brother.

Why did I read this book: I am a HUGE Kate Noble fan so much so that her book Revealed was one of my top reads of 2009.

Jason Cummings, the Duke of Rayne feels the need to settle down and get married as any responsible Duke would do. He sets his cap on this interesting young lady and is prepared to ask her hand in marriage when her father – who is the head of the Historical Society – asks him a favour. He is to accompany one Winnifred Crane on a journey to seek proof that a painting hanging at the Society is not authentic. For Winn is an expert Art Historian who has spent years training with her scholarly father and just wants to be granted the recognition she deserves and membership to the Historical Society. The two embark on a road trip fraught with dangers and adventure on a journey that will eventually change their lives.

Kate Noble writes the kind of romance novels that I love. She writes about falling in love in a way that I can relate to, almost in a subdued manner, generally moving slowly from friendship and respect to love. Her books have characters that are not extremely anything (her heroes are not the BEST at everything) and I really appreciate that. I love beta heroes and strong heroines who are normal people. Jason for example is just a good guy, someone who can’t fight, can’t run because he is out of shape, who he is not a rake and who spends the first part of their journey smelling like fish. I find that extremely refreshing but not as refreshing as her heroine, Winn. Although her character might be seen as the recognisable trope of the “Bluestocking” (which many times is nothing but a label attached to a character and that doesn’t mean anything): she is indeed smart, hard-working, a true intellectual who is proud of her accomplishments (no fake modesty) and who is not a martyr. She is also very observant and critical of her environment which brings me to what really made this book for me: the fact there is not only a play with customary gender roles by reversing them but also openly discussion of gender roles at the time (early 19th century).

With regards to the former: the hero is the one seeking marriage, the one who constantly wonders about what constitutes love and romance (and comes up with a great definition of love, by the way, which involves equal parts caring, friendship and lust) and the one ready to settle down. The heroine is the one who doesn’t want these things, who wants to be independent and go on adventures and to have the right to choose.

With regards to the latter, the heroine is constantly asking herself about her expected role in society, why can’t she be more, do more. I love this conversation between Winn and Jason for example:

“I don’t consider marriage an ending, in and of itself.”

“Neither do I,” she was quick to agree. “But the world has different expectations for us. And I’m well aware of how the world sees me. A spinster, whose life is in a library, who missed my window of happiness by caring more for old men than young ones. My life is over. But you, the world sees as young and virile – your life is laid out before you. You can do anything you wish. Even if you contemplate marriage, you are just beginning.”

“Winn- Jason sighed wearily – “what are you trying to say?” The desire to sleep seemed to be winning out over the desire for answers. For her, too.

So, as she settled deeper beneath the covers, she made her conclusion softly, simply.

“Why, if we are the same age, am I considered done and you just getting started?”

Now sometimes, in the world of Romance, heroines and heroes wish for impossible things and are granted them like in a fairytale. Not here. Although the characters address these issues, they are not miraculously solved. Although this book celebrates Winn’s attempt to be free, a lot of the times Jason had to come to her rescue. This was cause for frustration but I do grudgingly accept that as necessary and probably historically accurate. This is however, acknowledged in the text and by the characters and at one point Jason says that one of the reasons he embarked on the journey was that his sense of honour begged it of him because he knew that fair, or not, the world was only prepared to give the benefit of doubt to a woman who was under the protection of a man even when a woman like Winn does not need it.

Now, even though my thoughts on the novel are focusing on those gender-related aspects, that is not to say that this is heavy handed or that the story has a serious tone. Like the majority of Kate Noble’s novels, Follow My Lead is a light, adventurous romp, with plenty of funny moments, and sexy times (not too graphic, if you were wondering). Also: other girls who are not the heroine who are also cool, sexy, smart and witty and whom I wish to read about.

It is not a perfect novel: I did find myself wondering about too modern-sounding expressions uttered by Jason (if I remember correctly, a “fuck it” made a quick appearance) and those jarred me right off my reading. To be fair, I did read an Advanced Reading Copy, and these might have been removed from the final version. Another thing that I disliked immensely (as I usually do) was a most unnecessary secondary plot involving a villain that proved to be quite trivial and verging on silly in the end.

Nevertheless, I really loved this novel and it reminded me why I love romance so much. And it is because I love her prose and the fundamentalsof her story i.e. the characters and their arcs and their feelings that I allow myself to look past certain things like the too modern sounding words or the ridiculous villain. And OH MY GOD the ending. It was perfect.

Notable Quotes/ Parts: The ending. The very last page. It is almost too abrupt and simple and yet by being so, it adds an effectiveness that is plain awesome.

Additional Thoughts: So, I am way behind on my romance reading and I want to catch up on new authors and new books. Let me know what you have been reading, dear readers, and what would you like me to review!