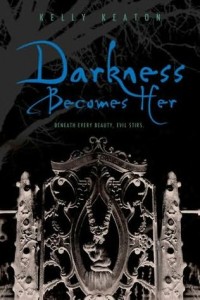 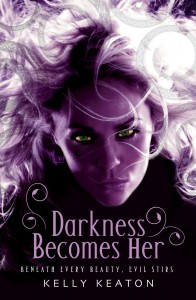 Ari can’t help feeling lost and alone. With teal eyes and freakish silver hair that can’t be changed or destroyed, Ari has always stood out. And after growing up in foster care, she longs for some understanding of where she came from and who she is.

Her search for answers uncovers just one message from her long dead mother: Run. Ari can sense that someone, or something, is getting closer than they should. But it’s impossible to protect herself when she doesn’t know what she’s running from or why she is being pursued.

She knows only one thing: she must return to her birthplace of New 2, the lush rebuilt city of New Orleans. Upon arriving, she discovers that New 2 is very…different. Here, Ari is seemingly normal. But every creature she encounters, no matter how deadly or horrifying, is afraid of her.

Ari won’t stop until she knows why. But some truths are too haunting, too terrifying, to ever be revealed.

Why did I read this book: It is a mixture of futuristic dystopian (well, sort of) and Greek Mythology featuring GORGONS! How could I not want to read this?

It’s the near future, more than a decade since New Orleans has been destroyed by a natural disaster in 2009. Now called New 2, the rundown city has been bought from the government by a conglomerate of 9 powerful families who run and control the city. Beyond the rim, no one really knows what goes on in New 2 but rumour says it has become a sanctuary for all sorts of paranormal beings.

Ari is a 17 year old who grew up in foster homes and is now determined to find more about her past and why she is so freakishly looking with her teal eyes and silver hair that can’t be coloured or cut. After hiring a PI, she learns she has been born in New Orleans and was later abandoned by her mother who then committed herself to a mental institution where she eventually committed suicide. There, she finds a letter addressed to her with warnings about a curse and to keep away from New 2 at all costs. Are these the warnings of a deranged person or do they have some truth in them? When Ari is attacked by a weird-looking dude in old-fashioned warrior clothes and speaking a foreign language, she decides that New 2 is where she must go to in order to solve the mystery of her past, and discover why her mother left her and why she is so different. There, she will find friends and foe alike, as well as the terrible truth about a family curse and just how that affects her.

I am rather conflicted about Darkness Becomes Her. On one hand, I love the premise, the setting and the characters. Although, I can hardly say that the premise is an original one since the protagonist that goes in search of her past only to find out how powerful she is, is a well-know and perhaps overused trope, the uniqueness of the setting and the strength of the main character more than balance it out. New 2 is an interesting place, deftly described by the author in its destruction and resilience to continue despite being set apart from the rest of the country. The conditions that people have been living under; the divide between poor and rich, the politics of the 9 families are all very interesting to read about. Not to mention the Fantasy elements with the different types of supernatural creatures all congregating in the city – a mixture of the usual vampire and werewolf with the more unusual Greek monsters.

Character-wise, I loved Ari. I loved not only how totally kick-ass she was with her awesome fighting skills which (she learnt from her latest foster family) but also her issues with her past in the foster system that understandably makes her sort of stand-offish when meeting new people.

It is all good stuff and it has a lot of potential.

However. I had considerable problems and feel that the aforementioned potential for greatness was well, sort of wasted in such a short novel.

For starters, things progress way too fast not only in terms of plot but in terms of character arc. The first is of course, absolutely fine, we all know that when shit hits the fan, it is hard to prevent events from occurring. The latter is the one I have problems with. Ari is a person with secrets, cool and aloof for her entire life (or so we have been told to start with) but as soon as she arrives in New 2 she strikes a relationship with a bunch of ragtag kids who live together and a romantic attachment with this guy Sebastian. IN ONE DAY. At one point, she spends the morning learning about a terrible family curse and then the afternoon doing touristy things walking around town holding hands with Sebastian. It was extremely grating especially when sweeping declarations of love, dedication and loyalty are exclaimed after only but a few scenes. That is not to say the potential wasn’t there, it was, which is even more frustrating. Sebastian is actually a pretty cool guy, the ragtag band of kids is all awesome but the whole thing just needed more development, more time to make it believable.

And the worst part is that it is supposed to be ok because the text acknowledges it and it actually comes with a built-in explanation for our convenience, thank you very much, for how the connection happened between them all so fast, it

stemmed from our uniqueness, from recognising a kindred soul.

This brings me to another cause of distress: I had a few problems with the writing. In parts (like the descriptions, or the fighting scenes) it was pretty good but I felt it relied a lot on shortcuts and for example, when characters were reacting to something it was always via adrenaline snaking through limbs (and system and veins); muscles ticking in jaws; goose bumps sprouting in arms (and legs and backs). It became not only repetitive really soon but it also affected the overall quality of the novel. Not to mention all the foreshadowing. One scene in particular has two rather powerful creatures telling Ari they owed her for saving them and that all she had to do was to call them if she needed their help which of course happens soon enough. It results in an instant removal of any possible tension not mention that it lacks subtlety.

I think that the best description of the novel which would both encompass the good and the bad is that it reads very much like a prequel and thus “this is what happened before”: Ari finds out who she really is, what is the curse affecting her family; she establishes her mission (vengeance), her nemesis, her allies and now the story can actually begin.

In the end, I can’t, for the life of me, decide on how I feel about the novel. I LOVED parts of it, I read it in one sitting and I think this series has a lot of potential. But this book reads like prequel, I had some trouble with parts of the writing not to mention the silly, unnecessary romance (really, it goes away towards the ending). I think it does sit firmly on the “Good” side of the scale though and I will definitely read the sequel.

Notable Quotes/Parts: OK, every time Ari was able to tap into her powers: AWESOME.

Additional Thoughts: Is YA going through a Greek Mythology Phase or something? These are only but a few I know about coming out this year:

The Goddess Test by Aimee Carter: out April 26th 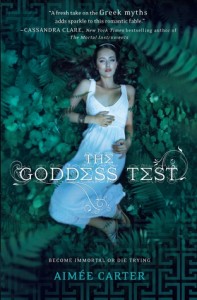 It’s always been just Kate and her mom—and her mother is dying. Her last wish? To move back to her childhood home. So Kate’s going to start at a new school with no friends, no other family and the fear her mother won’t live past the fall.

Then she meets Henry. Dark. Tortured. And mesmerizing. He claims to be Hades, god of the Underworld—and if she accepts his bargain, he’ll keep her mother alive while Kate tries to pass seven tests.

Kate is sure he’s crazy—until she sees him bring a girl back from the dead. Now saving her mother seems crazily possible. If she succeeds, she’ll become Henry’s future bride, and a goddess.

Starcrossed by Josephine Angelini: out May 31st 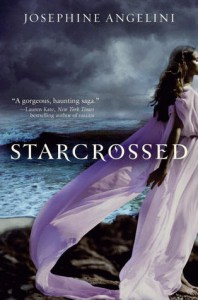 How do you defy destiny?

Helen Hamilton has spent her entire sixteen years trying to hide how different she is—no easy task on an island as small and sheltered as Nantucket. And it’s getting harder. Nightmares of a desperate desert journey have Helen waking parched, only to find her sheets damaged by dirt and dust. At school she’s haunted by hallucinations of three women weeping tears of blood . . . and when Helen first crosses paths with Lucas Delos, she has no way of knowing they’re destined to play the leading roles in a tragedy the Fates insist on repeating throughout history.

As Helen unlocks the secrets of her ancestry, she realizes that some myths are more than just legend. But even demigod powers might not be enough to defy the forces that are both drawing her and Lucas together—and trying to tear them apart. 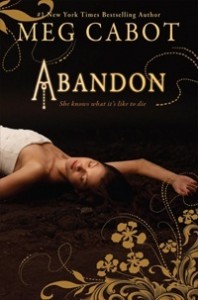 Though she tries returning to the life she knew before the accident, Pierce can’t help but feel at once a part of this world, and apart from it. Yet she’s never alone . . . because someone is always watching her. Escape from the realm of the dead is impossible when someone there wants you back.

But now she’s moved to a new town. Maybe at her new school, she can start fresh. Maybe she can stop feeling so afraid.

Only she can’t. Because even here, he finds her. That’s how desperately he wants her back. She knows he’s no guardian angel, and his dark world isn’t exactly heaven, yet she can’t stay away . . . especially since he always appears when she least expects it, but exactly when she needs him most.

But if she lets herself fall any further, she may just find herself back in the one place she most fears: the Underworld.

Reading Next: Fire and Hemlock by Diana Wynne Jones

Book Review (and a half): The Mountains of Mourning & The Vor Game