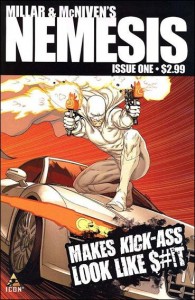 CIVIL WAR? Nothing. KICK-ASS? A warmup. What if the smartest, toughest costumed bad ass in the world was totally evil? Meet Nemesis. He’s systematically been destroying the lives of every police chief in Asia, and he’s now set his sights on Washington, DC. Between you and me, the police don’t have a chance. Do not miss the book that EVERYONE will be talking about by the creative team that made CIVIL WAR the biggest book of the decade.

Stand alone or series: Collects issues 1-4 of the comics.

Why did I read this book: I loved Kick-Ass by Mark Millar and the premise sounded so good.

I can’t remember how I came about the tagline for Nemesis but it made me buy the GN (which collects its four issues) straight away: “What if Batman was the Joker?” but not only that, what if Batman was the Joker in a world where there was NO Batman or any other superhero? Add to that the fact that Kick-Ass’ Mark Millar is the author and not only did I buy it straight away, I read it immediately.

And oh boy, how I wished I hadn’t. Nemesis is pure self-serving drivel.

Nemesis is the world’s only super-villain, one that has picked police chiefs as targets and has been systematically destroying their lives (and the cities they live in). His latest target is Washington, DC’s chief of police Blake Morrow (in-keeping with the Batman-Joker theme, let’s say this is Commissioner Gordon’s equivalent), a righteous, honest policeman now determined to put Nemesis behind bars.

I love the premise of the comics – truly, I do. But when one sets out to write something and dangles around such a carrot, one must be prepared for the inevitable comparison: how does Nemesis compare with the Joker in the way of villainy? The answer is, in short: it doesn’t. Even when both the Joker and Nemesis share two commonalities: the lack of real reason to be a villain other than being a psychopath AND a gift to create chaos, Nemesis is ultimately just not that interesting a character. Maybe that is the point though: that anyone with a lot of money and inventiveness can do as they please. In this case, it just turns out that what the main character wants to be is a super-villain.

Never mind that the potential for such much more is completely wasted: What would happen to the world should there be a super-villain and no superheroes around? Would the common man stand up to fight it? But can a common man ever face a super-villain? Could Commissary Gordon ever beat the Joker without Batman? Or if you don’t care about the good side of the force then reverse the questions: what makes a person a villain? What could be the most horrible thing a villain can do? In Nemesis it seems to be: kidnap the president, shoot and kill randomly, violently and with a lot of blood but really have no other villain thought or done those things before? Of course it has been done before. Repeatedly by several other villains, super or not. Yawn.

Quite possibly the worst thing that Nemesis does is to attack Morrow on a personal level but I am not going to go there because there way lies madness. Suffice it to say that the WORST thing that he does involves Morrow admitting publicly his most shameful secrets: and those include the fact that his son is gay and his daughter had an abortion. I understand that these could be horrible secrets for the commissary because he is Catholic but the fact that it is implied that these are sins to everybody else AS WELL MAKES ME WANT TO…wait. I said I was not going to go there.

I am going around in circles because I am finding it hard to explain why I loathed this GN. It might be because the writing is nothing to write home about or there is nothing truly new or interesting in the way the characters are portrayed. The ending should comes as a twist but honestly it only served to leave me with a thousand unanswered questions of the type: HOW does exactly that work? How does that make any sense whatsoever?

You want to write grim and gritty? FINE. But at least make sure that you actually write it well, that you have characters that are fleshed-out, and that you don’t hammer the idea that this is gritty and grim because the hey look that’s just the way of the world. It would also be useful if the art was actually good: but as with the rest of the GN it lacks something as well. Not to mention that even though this is done by a different artist, the art is so very similar to that of Kick-Ass. There is even a whole sequence in which Nemesis attacks on his own a bunch of policemen that is almost a play by play of that sequence in which Hit-Girl attacks the drug dealers: 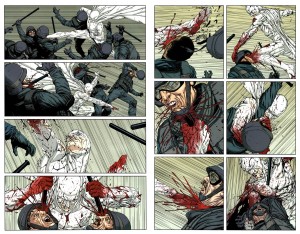 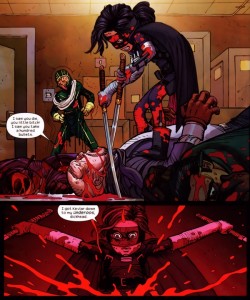 To sum up: please sir, can I have my money back?

Notable Quotes/ Parts: I will give this one a pass.

Additional Thoughts: If you want to read comic/graphic novels about villains, I highly recommend: 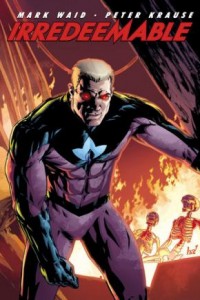 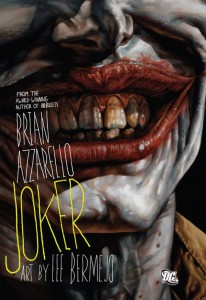 In the all-new, hardcover original graphic novel JOKER, writer Brian Azzarello (100 BULLETS) and artist Lee Bermejo (HELLBLAZER covers) – the creative team behind the acclaimed miniseries LEX LUTHOR: MAN OF STEEL – show an even darker and more disturbing side to the most dangerous man in Gotham: The Joker.

After yet another stint in Arkham Asylum, The Joker finds “his city” divided among mobsters and costumed villains. Not content to settle for a piece of the pie, The Joker vows to take back the whole damn enchilada by any means necessary. Look for appearances by a slew of Gotham’s most wanted, including gritty takes on Two-Face, Riddler, Killer Croc, Penguin, Harley Quinn and even Batman!

Not since THE KILLING JOKE have you seen such a powerful tale of The Joker – you won’t want to miss this one!

Rating: 1 – One of the worst books I have ever read; I want my money (and a few hours of my life) back

Reading Next: The Wise Man’s Fear by Patrick Rothfuss.

Over at Kirkus: The Accident Season and Other Recommended Tales