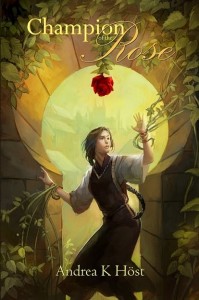 Title: Champion of the Rose

Soren Armitage is an anachronism. Proclaimed Rathen Champion by the Rathen Rose, intended to support the rule of a Rathen King or Queen.

But there are no Rathens.

Resigned to symbolising only Darest’s faded glories, Soren is not prepared for the sudden appearance of a Rathen. Now she must find and support the heir despite the machinations of the kingdom’s regent, sylvan curses, and the strange behaviour of once-dormant protective enchantments. While the odds seem stacked against her, Soren is determined to do her best to live up to the name of Rathen Champion. But what is she to do when it seems that there is something very wrong with her Rathen? Can she trust the person she is meant to protect?

How did I get this book: I received a review copy from the author.

Why did I read this book: I liked the author’s pitch when offering a copy for review and I LOVE the cover. Mind you: it looks YA but it is not.

Trigger warning: I discuss rape and its aftermath as it happens in the book
This review contains (minor) spoilers!

For centuries, the Kingdom of Darest have been ruled by the Rathen dynasty, supported by the Rathen Champion and magically protected by the Rathen Rose, created solely for this purpose. Until that is, years ago the world saw the last of Rathens die; ever since then the slowly declining Darest has been ruled by a Regent and the Rose sleeps until the time comes for a Rathen to re-emerge and takes his or her place in history. And then there are the Champions who over the years have been chosen and proclaimed only to remain waiting for their Kind or Queen to appear.

The current Champion of Darest is Soren Armitage, a young woman whose current position in the palace is more symbolic than real. When a rose appears in the Rathen Rose’s rosebush this can only mean one thing: that there is a Rathen out there and Soren must set out to find the new Rathen monarch. Soon enough she finds the new King, a temperamental man called Strake, who is not who everybody expected (and I shall not disclose some of the details as to not spoil) and the two strike up an uneasy relationship due mostly to Strake’s anger and hurt; and the situation only gets worse when soon after they meet, for reasons undetermined at that point, the Rose puts Soren under a compulsion and she is forced to rape Strake against her own will.

The story progresses as Soren and Strake have to not only deal with the consequences of that terrible action and to settle in their roles as Champion and King but also to find and fight their way in the midst of a collapsing kingdom, palace intrigue, enemies everywhere including potentially the regent and her son Aristide not to mention the Rathen Rose who may or may not be out of control.

Champion of the Rose is a self-published novel which I agreed to review based on the combination of the author’s pitch, the blurb and the cover of the novel and I am glad that I did because I really enjoyed the book, read it in one sitting, voraciously turning the pages until I was done. Having said that, once I finished the book and thought about it, I realised that some things did not sit that well with me and this is the reason why, despite having read the book a few months ago, I am only now writing the review. And I finally decided to do so because the memory of the book is still going strong and the positives vastly trump the negatives.

Its strengths are many: the world-building is interesting and vivid and the author throws us into the story with nary an info-dump in sight. This to me is a welcome trait especially when it comes to the sexual orientation of the characters and the sexual practices of the entire kingdom where bisexuality and polyamorous relationships are the norm and there is no long-winded explanation for it because it is simply natural. That was very cool.

The political and courtly intrigue, the mysteries surrounding the Kingdom are intriguing and well-developed. The characters, including the villains, are three-dimensional and more on a grey arena than a black-and-white territory. Soren is a strong character without being kick-ass, who struggles to find her niche. Strake is insufferable, terribly moody but actually with a reason to behave in such a way: the history of how he is alive is sad and the fact that he lost his love in such a tragic manner. My favourite character though, turned about to be Aristide, the son of the Regent, potential villain, uneasy ally.

But the greatest aspect of the novel arises from its main dynamic: that between the Rose and the Kingdom which is mirrored in the relationship between the Champion and the King. The Rose was created with an objective in mind: to protect the Kingdom by way of its rulers. But this bond should be breakable but it becomes unbreakable with time causing a problem: is the Rose subject to the Kingdom or is it really the other way around? Where are the limits of this bond? When does “protection” becomes “curse”? How to objectively act on this? Can the Kingdom even survive without the Rose?

This dichotomy is present in the characters themselves: The King is obviously the Kingdom and Soren represents the Rose. The Rose actually acts through Soren, who has not only protective powers but also becomes the Eye of the Kingdom: she can observe every single thing that happens inside the castle (and that invasion of privacy is yet another problematic aspect of the Rose “protection”). Not to mention that the Champion has usually through time acted as not only the protection of the monarch but also as anything the monarch comes to need be it a confidant, a friend, a lover. This is such a great dynamic with great potential to be explored.

Which is why Strake being raped by his own Champion (even if the rape is against her will as well, which means that Soren is ALSO raped) is so terrible and it is understandable that it throws a wrench between the two, and their budding relationship. It is also terrible to know that it happens because the Rose is trying to protect the reign just like it was created to do: the reason behind the rape becomes clear later on. That still does not excuse it: it is rape, it is horrible. And even though Strake KNOWS that Soren was also raped, it is still her face that he sees in front of him. Which is why I struggled with the romantic relationship that develops between Strake and Soren. For starters, it happens so soon (as the story takes place in a matter of weeks) and Strake is at first, SO furious, SO hurt and understandably so that I simply could not understand his change of heart. Add to that the fact that his love, his intended bridegroom died in front of him also only a few weeks before he falls in love with Soren; and I can’t see any reason for them to actually fall in love with each other (seeing as how they can barely tolerate each other to start with plus the conflict caused by the rape) expect for an added Deus Ex Machinery which explored the idea that Soren was just like the dream “third” in Strake and his bridegroom’s relationship. In my mind, this is almost an unsolvable conflict, let alone one that is basically brushed aside so soon although I understand and appreciate that not every reader will feel the same way.

In any case, the romance arc is my biggest problem with an otherwise winsome, rather enjoyable Fantasy novel.

After a morning spent sorting through the previous Champion’s library, both Soren Armitage and the aide lent her by the Chancellor were so dust-laden that they were beginning to blend into their surroundings. Grey hair to match grey eyes, Soren thought, tucking usually black strands behind her ears. A grey life.

Without warning, the door crashed open, and the nearest pile of books lost its tenuous grasp on balance and slid into a heap. Three other piles slumped after it, puffing out dust redolent of old paper and slowly decaying binding. Soren sat back with a grimace, while her assistant for the day, Halcean, lived up to her red-headed nature by colouring hotly.

Oblivious, Aspen Choraide whisked into the room and stopped in the centre of the resulting tumble: a handsome blonde set off well by white and icy-blue linen. In all the poisoned throng of the Court, this was Soren’s closest excuse for a friend, an apprentice mage not even willing to risk his position with open partisanship while he tried to coax his way into the new-minted Champion’s bed. Soren was by turns infuriated and tempted by his trifling. At least he managed to laugh with as well as at her.

Today he was overflowing with excitement, well above his ordinary benign enthusiasm for life. Almost vibrating. “There’s a rose!” he said, barely able to get the words out for the sheer delight of them. “A rose!”

“What of it?” Halcean asked, a decided snap to her voice as she rose out of the dust cloud he’d set off. She glanced pointedly about the room, which was festooned with carvings of roses.

He waited for their reaction, but Soren could only stare.

You can read the first 5 chapters free, online.

Additional Thoughts: I really like Andrea Host’s writing and will be reading her other self-published books. And I REALLY like her covers! 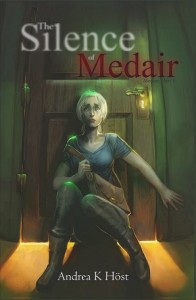 Time stole victory. Medair an Rynstar returned too late to drive back the Ibisian invasion. Centuries too late. When friend and enemy have become the same thing, what use are the weapons Medair planned to use to protect her Empire? There is no magic, no artefact, no enchanted trinket which can undo the past. But no matter how Medair wishes to hide from the consequences of her failure, there are those who will not allow her the luxury of denying the present. Her war is already lost, but she carries weapons which could change the course of new battles. With the skirmishes of war beginning, and hunters in near pursuit, it is her conscience Medair cannot escape. Whose side should she be on? What is she really running from? 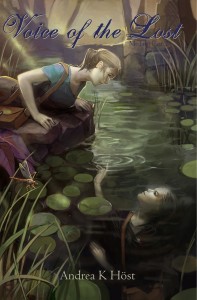 Medair an Rynstar wants only to leave.

Five hundred years after the Empire she served fell to the Ibisian invaders, Medair has betrayed her Emperor’s memory by helping the descendants of the invaders. She knows she will be reviled, that to thousands she is hero-become-villain, and her one goal is to return to the hidden cave where she slept out of time, and hope that she wakes in a world where the name Medair an Rynstar has been forgotten.

Assassins, armies, and desperate magic complicate Medair’s plan of escape, leading her inexorably to face the very people her choice has cost the most. She has learned that you can never to return to your past, or run from the consequences of your actions, but can she find a way to live in defeat?

Rating: 6 – Good and leaning towards a 7

Reading Next: The Evolution of Calpurnia Tate by Jacqueline Kelly.