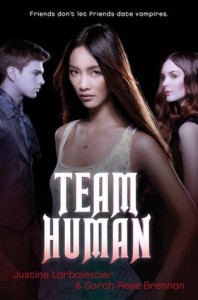 Just because Mel lives in New Whitby, a city founded by vampires, doesn’t mean she knows any of the blood-drinking undead personally. They stay in their part of town; she says in hers. Until the day a vampire shows up at her high school. Worse yet, her best friend, Cathy, seems to be falling in love with him. It’s up to Mel to save Cathy from a mistake she might regret for all eternity

On top of trying to help Cathy (whether she wants it or not), Mel is investigating a mysterious disappearance for another friend and discovering the attractions of a certain vampire wannabe. Combine all this with a cranky vampire cop, a number of unlikely romantic entanglements, and the occasional zombie, and soon Mel is hip-deep in an adventure that is equal parts hilarious and touching.

Acclaimed authors Justine Larbalestier and Sarah Rees Brennan team up to create a witty and poignant story of cool vampires, warm friendships, and the changes that test the bonds of love.

How did I get this book: I received an ARC from Sarah Rees Breenan

Why did I read this book: When I first heard about this book, I honestly thought it was all an elaborate prank. I am a HUGE fan of both authors (their books have made my top 10 on occasion) and the premise sounded too good to be true. Then I was on Twitter talking about this awesome prank I had heard about when both authors confirmed this was a true book. Needless to say, I had to read.

Team Human surprised the hell out of me. I was expecting it to be a good satire but it manages to be much more.

Mel is not a huge vampire fan. I mean, it’s not like she goes out of her way in her dislike but neither does she think a lot about them. In her town – New Whitby – vampires stay in their part of town, she stays in hers. But then worlds collide when a vampire enrols at her high school and her best friend Cathy (who would have been a vampirologist if that was an actual career) starts to fall in love. Mel is duly horrified at the prospect of losing her best friend to the undead and starts a campaign to save Cathy from Francis’ attentions. Whatever it takes.

In the meantime, her other friend Anna is having problems of her own: her father left her family for a vampire and her mother is behaving oddly. Since Mel has taken upon herself to always help her friends in time of need, she starts an investigation of her own. An investigation that will lead her to cross paths with a vampire cop, her human son not to mention, zombies.

From the start it becomes patently clear that Team Human is a satire. It is there in the blurb, it is there in its tagline and it is there as the story begins. It is a book that pokes fun at many of the most recent, post-Twilight Vampire novel tropes in a way that criticises their most obvious problematic facets. And just like in any good satire its main weapon is its wit – and the authors found in Mel, the main character and narrator, the perfect weapon of mass satire. She is witty, clever, determined and awesomely developed. Mel’s is the voice of every single one of us on Team Human, who have ever questioned the allure of Team Vampire. She voices all of those applicable concerns when her best friend starts to fall in love with a vampire: the question of their age different for starters (as Francis is over 100 years old), the question of immortality vs mortality and everything that Cathy would miss if she became a vampire (more on that in a bit). She also raises the questions of some of the most funny-inducing aspects of Teen Vampire tropes. Life for example:

”A vampire who wants to go to high school?” I said. “That is the most ridiculous thing I’ve ever heard.”

But to say that Team Human is simply a tirade against vampires would be doing the book a disservice. Yes, it satirises a lot of Team Vampire’s most common shortcomings but without losing sight of the fact that Vampires can be extremely allure. Mel might sit firmly on Team Human (and this never changes) but part of her arc is to realise not only some of her prejudices but also to learn to sympathise and understand other people’s choices. Not to mention the fact that the setting of the novel (and there is one) is one where Vampires exist in the world and humans have known about them since forever. There is also the development of rules to a very specific worldbuilding for this world (I loved how the authors combined Zombie and Vampire lore in a way that made perfect sense). Vampires here supposedly lose all of their human emotions when they become vampires and are incapable for example, of laughing. And since Mel is one of those people who love to laugh, becoming a vampire is unthinkable to her. In that sense, the authors managed the improbable: Team Human is a book for both vampire haters and lovers. As a firm member of Team Human, I loved it.

But that’s because the book is not only a satire – and that’s where it really surprised me. Knowing the authors’ sense of humour, I was expecting it to be laugh-out-loud funny. And it was, but it was also extremely charming and poignant. Because you see, at its core this is a book that lovingly portrays all kinds of relationships between people (human or not). Its main focus is Mel and her love for her girlfriends, a love that is so fierce and deep that she would do anything to help them. I absolutely, completely loved Mel and her friends.

More than that, Team Human features great sleuthing shenanigans, awesome kisses, girls who are capable of making their own informed decisions, girls who make earnest mistakes and learn from them and a world that is diverse in terms of race and sexual identity.

I just realised I managed to write the driest EVER review for a book that is not only extremely funny but also full of remarkable warmth. In the end, I laughed. A lot. What I didn’t expect was that I would also cry – a lot (good tears). I obviously FAIL at reviewing Team Human.I shall then resort to borrow the correct words from Maureen Johnson, who says it best: Team Human is in fact, TEAM AWESOME.

“I heard you referring to yourself as a “total ABC,” Francis remarked. I could hear the quotation marks around the words, as if he was picking up the phrase with tongs. “Can you tell me what that refers to in your culture?”

“My culture is American,” I snapped. “And that’s what it means. American Born Chinese.”

“Does it mean you can’t speak Chinese?”

“I can’t speak Mandarin or Cantonese or Hakka or any other Chinese language. Neither can my parents who are also ABC,” I said and made a face at Francis.

Francis did not respond to my face making as well as he did to Cathy’s damsel-in-distress glances.

“I thank you for doing me the courtesy of informing me on the subject,” he said calmly. “I am most interested in the magic of other cultures.”

“I’d thank you to do me the courtesy of informing yourself,” I replied, doing my best Francis imitation. “Get interested in the magic of search engines.”

I love you Mel!

Reading Next: The Shadowed Sun by N. K. Jemisin