Book Review: Whistling in the Dark by Tamara Allen 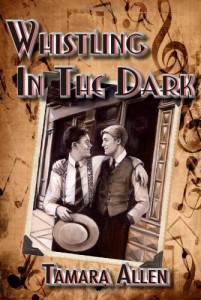 Title: Whistling in the Dark.

New York City, 1919. His career as a concert pianist ended by a war injury, Sutton Albright returns to college, only to be expelled after a scandalous affair with a teacher. Unable to face his family, Sutton heads to Manhattan with no plans and little money in his pocket but with a desire to call his life his own.

Jack Bailey lost his parents to influenza and now hopes to save the family novelty shop by advertising on the radio, a medium barely more than a novelty, itself. His nights are spent in a careless and debauched romp through the gayer sections of Manhattan.

When these two men cross paths, despite a world of differences separating them, their attraction cannot be denied. Sutton finds himself drawn to the piano, playing for Jack. But can his music heal them both, or will sudden prosperity jeopardize their chance at love?

Why did I read this book: It was recommended by two of our regular readers (Estara and John: THANK YOU SO MUCH) . Then I checked these reviews:

How did I get this book: Bought for my Kindle.

I recently reviewed Bright Young Things by Anna Godbersen, a Young Adult novel set in NY in the early 20s. I picked it up because that period is one that interests me and part of my eventual dissatisfaction with Bright Young Things was that I felt the setting was only superficially explored. I wanted more from a novel set in the 20s than mere description of clothes and booze joints and characters that fit certain of the decade’s stereotypes. This is why at the end of my review, I asked for recommendations and two of our regular readers, Estara and John J, highly recommended Whistling in the Dark. They also provided links to two highly positive reviews. I immediately bought the book and read it as soon as I could.

And OH MY GOD, how I loved Whistling in the Dark! I just….can’t even… I have no words to describe how good this book is.

Ok, I am lying, I have plenty of words:

It starts with the setting. It is the early twenties, in NY where people go to try their luck. It is a place of great change, of opportunity. But it is also a place of secrets, of regret, of escape, of sadness. Many lives were also lost to the epidemic Flu. The Great War just ended and people have lost dear ones and those who have returned alive have physical and emotional scars. Prohibition is about to be implemented; homosexuality is a crime. But is also a time and a place where Jazz clubs thrive, parties on rooftops and hotels last through the night and a new invention, the Radio attracts and unites music aficionados from all over the country.

It is against this backdrop that Tamara Allen sets her story: that of two guys dealing with all of the above, in different ways, first apart then eventually together as they fall in love. All of the wonderful details of the time are woven into the story, onto the plot, as it moves along and the 20s are never explicitly dumped in bags of information but are brought to live by the characters in what they do and how they behave and where they go.

Sutton has just moved to New York in a desperate attempt to restart his life after the shame of being expelled from University when he is caught with another man. He comes from a good, wealthy family who would never understand this part of him (or so he thinks) and he doesn’t want to go back to them. A former pianist whose prospects are lost to him after his hand is hurt during the War, Sutton ends up working at a café as an errand boy to make ends meet.

This is where he comes to know Jack, the owner of a curiosity shop next door, inherited after his parents died. Jack is setting up a radio station from the shop, and is passionate about it. He works with a couple of friends Ox and Harry (and a pet crocodile) who are his surrogate family. Ox is training to play the piano on the radio but he is not very good at it until the day that Sutton tries his hand and becomes part of this family too.

I love how there was no insta-love or even insta-attraction between Sutton and Jack. Quite the contrary, their love takes time to develop. From uneasy camaraderie, to friends, to lovers. It is a slow moving story, and layer upon layer of its plot and their characters are revealed to the reader gradually. Jack seems at first a carefree, funny, charming sort of guy who can get away with anything but underneath he is suffering from horrendous post traumatic stress disorder whilst trying to keep his business afloat especially after he borrowed money from types he shouldn’t have.

Sutton is a buttoned up sort of fellow but also romantic and yearning for acceptance. Music is such a part of who he is and Tamara Allen shows that splendidly when he is enraptured by playing it, or simply listening to it.

Their conflict, what might keep them apart is partly economy (they are penniless and it is not often that I see that sort of thing in books. Heroes scrapping for cents for their dinner); partly social strata (as Sutton is from a wealthy family); partly fear of commitment (especially from Jack); partly fear of losing one another. They have such different personalities and it is great to see how that affects them (oh, that impromptu bicycle ride) like when Jack shows Sutton life in NY and its possibilities or Sutton shows Jack that he might be from the country but he is no naive fool (oh, that first kiss). I could just go on and on because there is a lot that happens in the book – a secondary love story, family problems, wild parties, awesome friends, violence – without ever feeling like too much and the author does not shy away either from showing how horrible life was for queer people at the time.

And the writing, it is so lovely:

It would be so much easier if life provided sheet music to help him make sense of its dynamics–or even a few notations for finding the most harmonious chords. But life refused to oblige. He could only improvise.

And it is so subtle as well (in many ways: all the sex scenes are fade to black, kisses are all you will get), it is amazing how Sutton and Jack talk and say things without being exactly straight forward, their communication is made by gestures both small and grand and dear lord, their final conversation is made of so much awesome that I read it three times in a row just to get all the things that were left unsaid yet were clear as day.

All is so beautifully done that even when the ending comes with all of its fantasy ending when all is solved with a perhaps too-neat resolution I couldn’t care less because these two have won my heart big time and there was nothing I wanted more than for them to be happy .

I highly, highly recommend Whistling in the Dark. I haven’t read such a heart-warming romance in a long time. It was an amazing surprise, a welcomed one.

(Plus, all the proceeds go to leukaemia research. )

This wasn’t the New York he remembered from the handful of trips taken in the shelter of family and friends – nor the one that had been a passing rush of color, light, and noise on his way overseas. This New York was bigger and faster than the one he knew. Neither the troopship nor the crowded camp where he’d trained had seemed so rampant with life and movement. It brought to mind the enormous beehive he and the neighbor boys had once knocked out of an oak at his grandfather’s farm. It had been a wild race back to the house and he’d still been stung. His grandfather had joked that it was a lesson in doing unto others. His father had said in all seriousness that if you thwart a fellow’s industry, you can expect to bear his wrath. Sutton remembered being astonished that so many creatures could dwell in such close quarters and still carry on as if they had all the room in the world. This humming nest of humanity appeared to be managing it nicely and, further, took no notice of him whatsoever. Everyone he passed seemed to know the trick of surviving where you knew no one and no one wanted to know you.

He’d always wanted to see the world – but snaps of charred fields and broken bodies were not scrapbook material. Still, he had survived that hell on earth and he could remember his elation on the ship to New York. It was as vivid as his memory of a grim-faced Harry and teary-eyed Ox waiting at the gate, with news they hadn’t been able to put in a letter. How fresh and full like had seemed, up till that moment. All through the voyage home, he’d imagined the pride in his dad’s eyes, the joy in his mother’s. He still tried to imagine it whenever he had a bad night. It didn’t help as much as the gin.

Rating: 8 -Excellent and leaning towards a 9

Reading next: The Half-Made World by Felix Giman