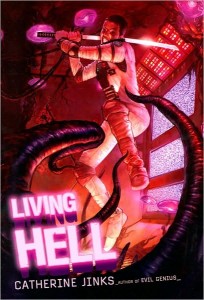 What happens when a single moment changes everything? For seventeen-year-old Cheney, life on earth exists only in history books. He and more than one thousand other people have known life only aboard the Plexus spacecraft: self-contained, systematic, and serene. But that was before the radiation wave.

Now Plexus has suddenly turned on them, becoming a terrifying and unrecognizable force. As the crew dwindles under attack, Cheney and his friends need to fight back before the ship that’s nurtured them for so long becomes responsible for their destruction.

How did I get this book: ARC from the Publisher (via NetGalley)

Why did I read this book: I have had Living Hell on my radar for quite a while, and completely forgot that I had a copy for review (oops). But, once I saw it buried in the depths of my nook, I was incredibly, pleasantly surprised (kind of like when you find a forgotten $5 in your coat pocket or something). So, I dusted it off (virtually) and dug in. On a shallow note, how awesome is the cover? I love it.

Lightyears away from Earth, the good ship Plexus makes its silent sail across the universe in search of a new, habitable planet. The crew is split into two rotations – every few years, they swap places, so while one team manages the ship and lives relatively normal lives, the other crew is preserved in stasis (a cryogenic sleep of sorts). It has been decades since the ship has left Earth, and new generations have been born on board, having never known their home planet, or anything beyond Plexus’s protective hull. Seventeen year old (in shifter years – actually in his forties according to actual years) Cheney is one of the ship-born “shifters” and enjoying his peaceful existence when everything goes – literally – to hell. The Plexus comes across an inexplicable burst of radiation, and unable to maneuver around it, passes through the field. And then the ship starts to…change.

Turning on its former precious cargo, the Plexus begins to attack and pick off the humans on board – and Cheney, separated from his family with only a few other shifters with him, must figure out how to stay alive and fight back.

Living Hell – NOT to be confused with the Japanese horror movie of the same name (which is quite good in its own sadistic and melodramatic way, but I digress) – is just as good as advertised, and every bit as delectably fun as its cover portends. A survival-horror science fiction yarn, Living Hell is the literary equivalent of an adrenaline rush. It’s kind of like Dead Space or Alien (although it has a lot of similarities to Pandorum, it’s much better than that film) – a little bit like your favorite SF shooter video game, a little bit good ol’ fashioned action. And sometimes, that is exactly what you are in the mood for. Such was my experience with Catherine Jinks’s Living Hell.

As with any action-horror type of novel, Living Hell lives and dies by virtue of its plot and on the strength of its writing. Thankfully, Ms. Jinks has a sure hand with both – the plotting is expertly paced and thrilling, and the writing all around solid. From the second the Plexus crosses the strange radiation burst and the ship begins to mutate into a living organism bent on destroying what it perceives of as invasive pathogens, the novel turns into a tense fight for survival. Cheney is forced to assume responsibility for the children under his watch, and must figure out how to outwit the ship’s self-defenses – climbing in airducts, stopping renegade laundry units and avoiding acid-spraying transportation vehicles.

From a character perspective, the book is, understandably, a little less well-rounded. Cheney, our hero, is likable enough and quick thinking, but it is the side characters like fiery “little brother” Dygall and the quiet Haemon that sparked my interest. Though we don’t get to know any of these characters with any real depth, they are entertaining and believable enough to sustain the breakneck-pace plot – and in a book like Living Hell, that’s all I could ask for.

Yes, from a worldbuilding and scientific perspective, the book is completely ridiculous, and the technojargon so much extraneous babble, but, hey, not all science fiction needs to be the hard stuff. The bottom line is that Living Hell is fun. Imaginative fun. Living Hell is solid, enjoyable SF-horror novel that reads like a movie or video game – definitely recommended if you’re in the mood for a fast-paced read.

There were so many of us – hundreds and hundreds. In A Crew alone there were more than seven hundred people. And B Crew was almost as big. Not that we had anything to do with B Crew. But they were there, in the Stasis Banks. Ready for their next shift.

The shift that never arrived.

Back then, I didn’t know everyone’s name. There were too many names to remember. We could do all sorts of things, because we had the numbers. We played sports. We held concerts. We threw parties. You won’t believe this, but at the very instant our probe detected that emission wave, I was attending a birthday party. Haemon Goh’s ninth birthday party.

In those days there were all kinds of nicknames. Haemon was a Shifter, just like me, because he had been born on board Plexus during one of A Crew’s shifts. I was a Second Shifter, and he was a Fourth Shifter. You won’t understand about shifts. Each of them was four years long, because cytopic stasis isn’t supposed to last more than four years. Any longer and you can suffer permanent damage. So every four years there would be a change of personnel as one crew woke up and the other was put into suspension.

It means that I’m older than I look. The day it happened – the day everything changed forever – I was seventeen. But only in shift years. If you’re talking real time, I was thirty-three. Haemon was turning nine, but he was really seventeen. We were on our sixth shift, you see. The last month of the second year of our sixth shift, after forty-six years in space.

And we still hadn’t found a habitable planet.

Additional Thoughts: I recently reviewed Hull Zero Three by Greg Bear, which is more of a grown up (and thematically deeper) version of Living Hell. If you’ve read this book and are looking for something a little more challenging, I’d highly recommend reading Bear’s newest SF release. And, if you’re in the market for a SF-horror film that hits a lot of the similar themes, you can’t go wrong with one of my all time favorites, Event Horizon. 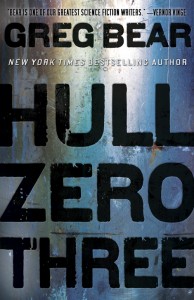 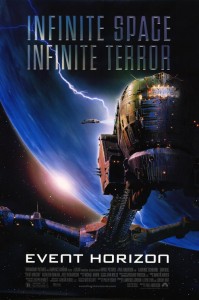 And on one last unrelated note: the cover. You may be wondering what the tentacles are, and why Cheney is wielding a katana – rest assured, these things occur in the book. Read it. You’ll see.