It’s Austenmania! Today we do a little homage to the queen of Historical Romance herself, the indomitable Jane Austen. With a twist – both books we are reviewing take Jane Austen in the modern era, either in spirit (literally), or in form… 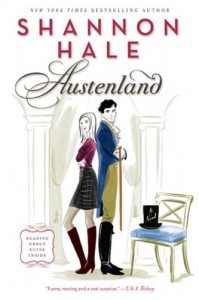 Why did I read the book: I was in the mood for a light romance Jane Austen-style

Summary: Jane Hayes is a seemingly normal young New Yorker, but she has a secret. Her obsession with Mr. Darcy, as played by Colin Firth in the BBC adaptation of Pride and Prejudice, is ruining her love life: no real man can compare. But when a wealthy relative bequeaths her a trip to an English resort catering to Austen-crazed women, Jane’s fantasies of meeting the perfect Regency-era gentleman suddenly become realer than she ever could have imagined.

Decked out in empire-waist gowns, Jane struggles to master Regency etiquette and flirts with gardeners and gentlemen—or maybe even, she suspects, with the actors who are playing them. It’s all a game, Jane knows. And yet the longer she stays, the more her insecurities seem to fall away, and the more she wonders: Is she about to kick the Austen obsession for good, or could all her dreams actually culminate in a Mr. Darcy of her own?

It is a truth universally acknowledged that I am always in the lookout for a good book. Unfortunately Austenland was not one of them and the more I think about it, the less I like it.

Jane Hayes is a 32 year old, successful graphic designer living in New York who has a dirty secret: her obsession with Pride and Prejudice by Jane Austen in all its forms but most especially with the BBC adaptation that has Colin Firth as Mr Darcy. To Jane, no one can measure up to Mr Darcy, not one of her former 13 boyfriends did, no one never will and this is why she decided not to date anymore. Why bother, right?

Then one day her rich aunt dies and leaves her an all-inclusive, paid for, holiday to an exclusive place called Austenland (the place is so exclusive, it doesn’t even have a website and it doesn’t show up when you Google it). Catering to a special clientele (to wit: rich, unhappy women), Austenland is the place where obsessive fans of all things Regency and Jane Austen-y go to live their fantasies: for three weeks, they immerse themselves in 19th century without any technology living as an unmarried young miss would live back them. Even if you happen to be a 50 year old woman, Austenland allows you to pretend to be a 20 year old looking out for the dream of being wooed by a Mr or a Lord (all the male in Austenland are actors playing a role). All visitors must agree with the terms and conditions which include confidentiality and to behave as though you are a regency miss, following all the rules of engagement. Any breech of these rules and the person is subject to be sent away, without refund.

Jane decides to take on the offer as means to say goodbye to her obsession. She will go, enjoy the three weeks and then say goodbye forever to the dream of Mr Darcy. Once there though, she gets a bit sidetracked by Martin the gardener, and by Mr Nobley, the Mr Darcy in this farce.

I am fully aware that Austenland is supposed to be a light, romantic comedy, a beach read, mindless entertainment and perhaps not be taken too seriously. But I think that this is actually a pernicious, dismissive way of looking at a genre, any genre as it excuses any number of flaws in plotting and character development. I also think that being entertained is good obviously; but “mindless” is not the same thing as “brainless” nor does it excuse lack of coherency and bad writing.

And I do think that Austenland suffers of all the above which was a major surprise to me as I know that Shannon Hale is a damn good writer. But the writing here is choppy and inconsistent. The narrative is weird, with the narrator sometimes interrupting the narrative to say things like “but Jane doesn’t want to think about it, so let’s move on” . But the main problem to me here is how Jane is so inconsistently written as to almost come across as an imbecile.

I don’t even know where to start with her character. Maybe with the fact that she keeps her DVDs of Pride and Prejudice hidden away because she is ashamed of them. Why would a supposedly intelligent woman do that? It is a highly acclaimed production of a well-know novel by the BBC. In the words of HBO: it is not TV, it is the BBC! Come on.

Then there is the fact that Jane has put herself on the shelf because her relationships have not worked so far. But she counts all the men she has met, dated once or twice as “boyfriends” because she is incapable of taking things lightly and flirty. Every man she meets is a potential husband and one of the first questions that occurs to her is : does he like children. She is intense and overeager. I absolutely abhor female characters that are written to define themselves by the number of boyfriends they had – and this is exactly what Jane does. She is never her own woman – she is always in relation to someone – and this is never challenged in any way.

Once she arrives in Austenland, the story is a rollercoaster of ups and down inside Jane’s mind: she is repulsed and attracted to the idea of Austenland. She just wants to have fun. She wants to use it as therapy. She doesn’t fit it, so she has a fling with the gardener. But she can’t have “fling” but OH MY GOD , she so can. She is changed! But no, she is the same. She will enjoy this and immerse herself and ooooooooo Captain East is attractive! She HATES Mr Nobley but wait. If Mr Darcy was like this, he must have been really obnoxious. But wait, she loves Mr Nobley.

The other characters are not fleshed out enough and the attempt of being as witty as the original was a major fail. Austenland, the place, although a cool idea to start with, comes across, the more you read, as a place non-different from a brothel given as how the actors have to romance each of the ladies because this is what they are paying for. The very idea is sadly pathetic and desperate. And I can’t, I am afraid, take it lightly and just have fun with it.

I am not sure what Shannon Hale tried to accomplish here. At points I could see the start of a criticism about the whole pretence and the place but it never lasted. Jane tries to get rid of her obsession with finding a Mr Darcy but the ending of the novel only reaffirms it.

This was definitely not the book for me. We (the book and I) did not click. To the point where I can hardly find anything positive to say and the only thing I can think of is how it was a waste of money and time. Jane Hayes is no Lizzie Bennet. In fact, I would go as far as to say that Austeland is what Pride and Prejudice would be like with Lydia as a protagonist[1. ETA: In the ensuing years, I have examined this take on Lydia. I take it back but I can’t change the review because I can’t change who I was when I wrote it.]

Notable quotes/ Parts: I will just skip this part

Verdict: A chick lit that reinforces all the stereotypes of the genre. I would give this one a pass.

Reading Next: Something good, please.

A Tale of Two DNFs: Book Discussion and Giveaway of Night’s Rose by Annaliese Evans