Book Review: Fly On The Wall by E. Lockhart

Title: Fly On The Wall 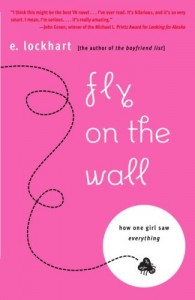 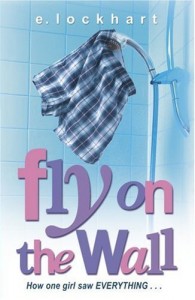 At the Manhattan School for Arts, where everyone is ‘different’ and everyone is ‘special’, Gretchen Yee feels ordinary. She sits alone at lunch, drawing pictures of Spider-Man, so she won’t have to talk to anyone; has a crush on Titus but won’t do anything about it and has no one to hang out with when her best (and only real) friend Katya is busy. One day, Gretchen wishes that she could be a fly on the wall in the boys’ locker room – just to learn more about guys. What are they really like? What Are they really cretins most of the time? Fly on the Wall is the story of how that wish comes true.

Why did I get this book: After reading and LOVING The Disreputable History of Frankie Landau-Banks, I had to try something else by this author. Now, she is an auto-buy.

I always have the hardest time starting reviews of books that I loved reading. After a while, starting reviews with the same sort of sentences gets really, really boring. I always admire those reviewers who start anew every single time, with a great opening that will hook readers and make them stay till the end.

Oh, how I wish I could be a fly on their wall! (sorry but the lame pun could not be avoided).

But you see, this is exactly the sort of wish that lands 16 year old Gretchen Yee into trouble.

She is having a hard time at home, her parents are divorcing, she will have to move, her mother has determined that she needs to get rid of some of her prized possessions (for Gretchen is a major hoarder). At school, things are no better. She attends a performing arts school where everybody is edgy and different whereas Gretchen is just ordinary (or so she thinks, she is a teenager after all). She is studying Kafka’s Metamorphosis but is behind her reading because she’d rather read Spiderman comics. She loves art but her taste and talent incline towards comic book art and that is just not real art according to her teacher.

But what really bugs Gretchen is her inability to understand boys, especially her crush Titus and she feels as though they are aliens, so different that they are. One day, as a joke she wishes she could be a fly on the wall of their locker room and she wakes up the next day and that is exactly what has happened. What happens next is a mixture of the funny – as Gretchen observes, rates and lusts for the boy’s “packages” – and insightful, as the situation is what Gretchen needs to understand a few things about her life until the Grand Finale.

The first thing that needs to be said is that suspension of disbelief is absolutely necessary for this story to work. It is not a Paranormal/Fantasy book so no explanations are offered with regards to why and how Gretchen is transformed into a fly. And in the end it doesn’t really matter, because that’s not what the story is about: her transformation into a fly is merely the catalyst for the REAL transformation to happen.

And that transformation comes from KNOWLEDGE. Her few days as a fly on the wall bring Gretchen knowledge and knowledge is power. But mind you, this knowledge doesn’t come from learning things or secret she is not supposed to (and the matter of privacy is brought up albeit briefly but since she has NO choice and has landed in this situation with no control whatsoever and she can’t leave the room) . The knowledge comes from observing and analysing what she observes. What she sees in those locker rooms are just people – and it serves to break down the walls she has built when she declared them to be so different.

Everything that she learns inside that locker room is probably no different from the things she could learn outside by simply opening up and observing people. One of the things that she does learn from it, is that her stance, her fear of interacting with those she doesn’t get is segregating. But she also learn boys have a different body but the way they feel about them (shame, pride, ) is no different that the way girls do; that it is ok for girls to lust and to act on that lust (and how I LOVE that) ; that there are shy boys , confident boys and bullies. She learns that and she also learns there is different of treatment when she realises who much bigger the boy’s locker room is:

I thought sexism was over already. I never thought it would be quietly living on in the architecture of my own school.

And this is another thing I need to say and it is going to sound obvious coming from someone who is reading them and writing them so very often but: words are important. And I feel that E. Lockhart has a deep understand of this. She not only writes beautifully but she also uses this understanding in the text itself as part of the story. The most important example within Fly on the Wall are homophobic words that one of the characters, Adrian, is so fond of using to refer to teachers and students . It was uncomfortable to read, it is distracting especially because of the playful tone he uses but it has a point. Even though I wished from the start that those hurtful sequences were going to come up later, I did not see it coming but OH how I loved the sequence in which Adrian is confronted by his best friend Titus in that locker room about these words. Not only because of the confrontation itself but how it is done and why. It is someone telling a friend why his words are hurtful to him and others because he wishes his friend to understand and change. And the reaction is even better: it includes an apology and a promise to change. There is no vilifying here because sometimes it is simply a matter of…knowledge. Once again, going back to what is for me, the soul of this book.

Fly on the Wall is a short book and for such a short book is certainly packs a punch – there is a lot to think about here. From different types of art and how they are or aren’t appreciated, from racial (Gretchen is half-Chinese) and sexual diversity (some characters are queer) and how they are represented. The author examines sexism and self-awareness and it is really well done. It sort of reminds me of her other incredible book, The Disreputable History of Frankie Landau-Banks although without the bittersweet realistic tone that book had. But then again this one is a book where the main character spends most of it as a fly on a wall. I say, extreme realism gets a pass this time.

And the ending… the ending is superb: it is Gretchen as a superhero and in this world, a superhero is someone who takes control of her own life, who acts on what she wants and what she believes in. It means going against the establishment and have one’s voice heard, it means saying you are sorry and fixing problems and in Gretchen’s case it also means getting the boy (Titus, I heart you) and I DO mean that.

Notable Quotes/Parts: Part of the conversation between Titus and Adrian:

So why are you talking about gay people like being queer is the worst shit anyone could ever be?”
“I’m not talking abot gay people,” says Adrian deffensively. “It’s a way of talking. It’s just how I talk, okay? It doesn’t mean anything.”
“But it does.”

Reading Next: Bloodthirsty by Flynn Meaney

Nerds Heart YA Joint Review: What Momma Left Me by Renee Watson