Book Review: Every In Between by Erzebet YellowBoy 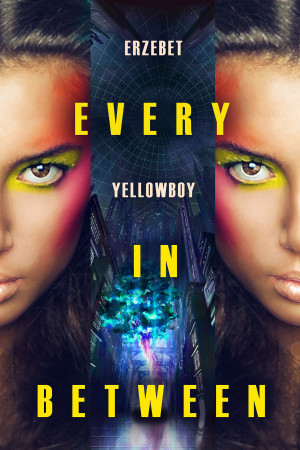 Title: Every In Between

They killed my mother. You are everything I ever wished for, she said before they put her to sleep. That’s how I got my name: Every. I am no one special. I’m just the one who knows they lied.

My city is just like every other city: derelict, decaying, enclosed by a great, gray dome. It is managed by a faceless authority and strictly controlled. We are born, live, and die inside its walls, safe from the vast nothing outside. War, they say, destroyed everything except the cities, and we are not to question why. Those of us who do question them run away—if we can—except there’s nowhere for us to go. For three long years I survived on the empty streets and back alleys of my city, searching for, but never finding, an exit. And then, one day it happened.

I got out and you won’t believe what I found.

Stand alone or series: Stand alone novella (but could be the first in a series)

Why did I read this book: Ana recently discovered imprint Masque Books, and has since been raving about their catalog. Naturally, I had to see what all the fuss was about – and Every In Between has my name all over it.

You have to understand. I had all but given up on finding a way out of the city. I’d searched every nook and cranny, or so I’d thought. I’d walked beside as much of the wall as I could. That thing is solid. It is lonely on the streets, and eventually it’s just easier to believe in what everyone has always told you – there is no way out. So explain this, I’d like to say to all those people now: my unit mother, my unit father, and even Minet. Explain to me what I’m doing here, outside the city, looking back through a hole in the wall.

Every is a child of the City. Every is an Orphan, who asks too many questions, who doesn’t listen to her Unit Mother or Unit Father, who dreams of the impossible. Unplaced Orphans – those who do not fit in and are not assigned jobs – are put to Sleep, but the long sleep isn’t for Every. When she realizes that there is no future for her, she runs away from her Unit family, willing to take her chances on the City’s streets, dodging death at the hands of the routine Patrols. Now twenty-one years old and utterly alone, Every stumbles across an impossible hole in the wall, and climbs through only to find herself in a strange empty land with a bright blue dome of a ceiling, interrupted by a strange, bright disc of light.

Every has found the space in between – the place outside of the walls exists, and it is not empty. Every finds a group of people like her, the Outsiders, who are free of the Cities’ ways and live off the land, and quickly she becomes a part of their clan. But despite the comfort, family, and love she discovers with the Outsiders, Every cannot forget the others like her – Orphans, slated for death – that she has left behind. Every vows to do everything she can to save other Orphans, no matter what the cost.

The first book that I’ve had the pleasure of reading from Masque Books and author Erzebet YellowBoy, Every In Between is a swift and effective dystopian novella that plays with familiar tropes, but imbues them with some much needed twists. On the familiar side, this is a story that is set in a future post-apocalyptic world in which environmental change and warfare has confined humanity’s existence to a few domed enclaves. Like many similar dome-set dystopian stories, Every In Between also features a totalitarian-style government that rules its people with ruthless, unchanging rules that mean death to anyone who dares step outside the set order. And, in the grand tradition of dome-set post-apocalyptic dystopias featuring shitty governments, there is a girl who dares to step outside the walls of her world and challenge the existing order of things.

While these are all fairly standard fare in the dystopian subgenre (see any number of recent SFF novels in this realm, from Veronica Rossi’s Under the Never Sky series to Julianna Baggott’s Pure), I’m very pleased to say that YellowBoy’s Every In Between holds its own thanks to its heartfelt protagonist, convincing writing style, and few key departures from the usual plotting standbys.

On the character front, Every is our protagonist and first person narrator, relaying her story in real-time as she finds a path outside of the City and a whole new reality awaiting her on the outside. One of the things I loved the most about this particular story is Every’s narration; as a character that has no concept of “outside” or “soil” or “sky”, Every is literally at a loss for words when she views the In Between (that is, the outside world “in between” cities) for the first time. She thinks of the sky as another dome and the sun as a “biship” (a type of sky vessel); she can’t understand why wind is blowing without the presence of turbines, or how there can be so much water on the ground (enough to submerge herself). She’s mystified by small black things that buzz around and bite, having never seen any living creatures outside of humans, and she’s enraptured by the taste of fruit (a stark difference to meals within the City). Suffice it to say that Every’s narration is convincing and heartfelt.

More important than Every’s lack of words to describe the things she sees for the first time outside of the City is her lack of expression for certain concepts – like a family of biologically related members or people who choose to live with each other, or the idea of “love.” And, well, this is where Every In Between gets really good in my opinion, because it defies the mind-numbingly predictable trope in which the plucky heroine escapes her sanitized fate within the domed world to find a super dreamy dude to instantly fall in love with in the world outside. In Every In Between, Every is confused by the mix of yearning, excitement and happiness she feels for Ally – the most beautiful girl Every has ever seen. She’s also confused by the intense nameless feelings she has for her trainer and raid partner Carduus, with his stern commands and focused attention. I love the fact that this story features a polyamorous romance between Every and the two people she feels so much for – as Every comes to learn, love is a strange and complicated thing and she embraces it whole-heartedly.

And on that note, the thing that really makes Every In Between work is the titular character, Every herself. She’s resourceful and a survivor, but her most endearing quality is her desire to do the right thing, no matter what the cost to herself. This includes risking her newfound happiness, the friends she’s just made, and the freedom she’s only just discovered. Because how can she sit idly by when she knows there are so many other Orphans and so many other people suffering and dying in the City because they don’t “fit”? I like this defiance in the face of complacence very much – and it’s fodder for future stories in this world (which I dearly hope YellowBoy returns to).

On that note, I’ll simply say that Every In Between is a wonderful novella, and I’m very much looking forward to trying more of YellowBoy’s (and Masque’s) work in the near future.

Reading Next: The Moon is a Harsh Mistress by Robert A. Heinlein

*Much to my delight, I found this ebook on Scribd included as one of the titles eligible for reading under their ebook subscription model. If you read a ton of ebooks, I recommend giving it a shot when you get the chance!