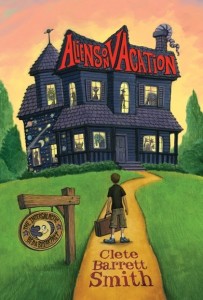 Scrub isn’t happy about leaving Florida and his friends to summer with his crazy grandmother in “Middle-of-Nowhere,” Washington. Arriving at her Intergalactic Bed & Breakfast, he isn’t surprised by its the-60’s-meets-Star-Wars décor, but he is surprised by the weird-looking guests. It turns out that each room in the inn is an off-earth portal and his grandma the gate-keeper, allowing aliens to vacation on Earth. Grandma desperately needs Scrub’s help monitoring the visitors, shopping for cartloads of aluminum-foil for dinner, and taking rambunctious alien kids, that glow-in-the-dark and look like trees, camping. The problem is, the town sheriff, already suspicious about Granny, is a scout leader camping in the same spot. Will Scrub blow Granny’s cover, forcing the B&B to shut down for good, or will the intergalactic police have to intervene?

Stand alone or series: First in a series of novels set at The Intergalactic B&B

How did we get this book: We both picked up signed copies at BEA

Why did we read this book: Really? The title is Aliens on Vacation, and that’s enough reason right there. It sounds like so much fun!

Ana: From beginning to end I had nothing but fun with Aliens on Vacation. It features a clever yet lonely boy as a protagonist, a fun, creative plot featuring Aliens on vacation in our planet and some really cool secondary characters that added lots of flavour to the story. I loved it.

Thea: The debut novel from Clete Barrett Smith, Aliens on Vacation is exactly the type of fun, hilarious book that I can see turned into a TV series or summer film. What happens when a normal boy is sent off by his workaholic parents to spend a summer with in Washington state with his kooky stranger of a grandmother at her home and place of business, aka the Intergalactic Bed and Breakfast? Adventure, chaos and hilarity ensues, of course. I loved this book to bits.

Ana: David, AKA “Scrub”, is not very happy about spending his summer vacation in the middle of nowhere with a grandmother he has never met. He had hoped to spend time with his best mate Tyler, shooting hoops and getting ready to try for the basketball team and instead he finds himself learning that Aliens not only exist but they actually come to Earth on vacation, arriving via the portals in each room of his grandmother’s Intergalactic B&B. He now gets to spend his days doing errands, taking care of the guests and trying to keep under the suspicious town’s sheriff’s radar.

Plot-wise, Aliens on Vacation is a quite simple story of a boy being entrusted with a secret and trying to help his grandmother to keep this secret and save her business when the town starts to get suspicious. As such, it is fast-paced, funny and fun especially with regards to those moments in which Scrub has to help Aliens looking more human or has to hide Aliens in plain sight.

By saying that the book is fun though, I am not saying that it is without substance. Quite the contrary, Clete Barrett Smith incorporated very astutely serious themes like loneliness and acceptance and diversity in this book without making it didactic or any less fun for kids (or adults). Because of those themes and the well balanced the Science Fiction and Contemporary aspects are, I would say that this is a more character-driven book than plot-driven.

Thea: Agreed. The plot of Aliens on Vacation is zippy and fun, but also hits home with some keen observations about human – err, intelligent being – nature. I’ll also agree that characterization – or at least, the characterization of protagonist David (aka “Scrub”) is what sets this book apart, though I believe that the book is driven by plot, not internal characterization. But more on that in a bit.

From a pure storytelling perspective, Aliens on Vacation is the perfect blend of the fun, lighthearted imaginative story and deeper message. On the fun front, there are numerous awesome scenes where David has to help his grandmother with housekeeping by inspecting alien guests and making sure they pass the GRADE – that is, that they don’t look too un-human. Naturally, this is a much more difficult process than it first seems – especially with aliens that have multiple appendages, purple scales, or are otherwise too exuberant at the chance to explore the primitive backwater planet that is Earth. As Ana says above, however, these fun interludes and plot devices are by no means the only thing that Aliens on Vacation has to offer – because there is some surprising depth to the story and ideas, as well. David is a lonely boy that yearns for attention from his parents, and discovers it in the kind and automatic trust that his grandmother places in him. There’s an evaluation of mob behavior, and how humans are so scared of things that are different, from the youngest bullies to the oldest authority figures. Even the scifi element of the story had some thought behind it – universal traits in the evolution of physiology, anyone?

Ana: This is where the book really came alive to me. Scrub is a great character and his narrative is relatable and engaging. At first, he is occupied with thoughts of what he is missing by spending his summer at the B&B (it doesn’t even have mobile or internet connection!) but little by little as he spends time with his grandmother and her guests, he grows to appreciate not only the attention he is given but also the tasks he has to deal for his work at the B&B. It is easy to see that Scrub’s parents are busy and not there for him all the time and that they hardly listen to him and ask for his help.During the summer he learns about responsibility and being trusted with a secret and he loves that. This translates into really funny moments but also incredibly difficult ones – is Scrub too young to deal with such a secret? Was his grandmother correct in trusting him?

This is also part of what made the book so interesting: that the adult’s actions – right or wrong – are also displayed and examined via very sympathetic lenses. Perhaps there is an explanation for Scrub’s dad aloofness. Perhaps his grandmother is not perfect. Perhaps the villain is not all that villanous. Perhaps being a Fantasy geek is not all bad.

Of course, in between all that, there is also the fact that Scrub is noticing girls for the very first time and Amy, the girl who suspects that something fishy happens at the B&B, is an awesome character: she is smart, funny and above all, compassionate. I loved her.

Thea: Yep, I wholeheartedly agree with Ana. David and his narration truly make this novel stand out, and I loved his characterization. In the span of the summer before seventh grade, David has a lot on his mind. He’s sent away from home, which means that he is immediately at a disadvantage for making the varsity basketball team since he won’t be able to impress his coach. He doesn’t know anyone in Washington, not even his own grandmother, and it looks like she’s one of the scifi/fantasy geek types (those guys are weird, according to David). But, what turns out to be a bogus summer becomes one of the most dangerous and exciting of David’s young life – not only does he become a trusted member of the family (a marked departure from his treatment at home in Florida), but he also grows up and becomes David – not just a kid with the unflattering nickname, Scrub. I loved that David reads as a very real young man, capable of making tough decisions when it comes down to it, but still an endearing and trouble-prone kid.

Beyond David, the other characters were fantastic as well, from his kindhearted grandmother to the spunky, super smart girl next door. The only thing I wish we could have seen more of was the alien perspective! One character is stranded at the Intergalactic B&B and has been for a very long time – one Mr. Harnox, who is incredibly keen on tinfoil and bleach. Being stuck on Earth for such a long time, forced to masquerade as a human and with David’s grandmother as his only friend, I wanted to know much more of Mr. Harnox’s story – but perhaps that is to be explored in the next book.

Ana: I expected Aliens on Vacation to be fun but I am surprised at how much I really loved it. I think this is a great book for kids and heck, for adults too.

Thea: Agreed! Aliens on Vacation took me completely by surprise, and I loved every second of it. I cannot wait for the sequel, and, if all goes smoothly, the upcoming film adaptation.

When the taxi pulled up to Grandma’s place I wanted to burrow under the seat and cower in shame. I blinked a few times, but the view didn’t get any better. Of all the places my parents had dumped me for the summer, this was the dumpiest.

The sign out front said it all: The Intergalactic Bed and Breakfast. The three-story Victorian home had at least the potential to be normal, with its white picket fence and rocking chairs on the wrap-around porch, but . . . no. The house was jet black, with huge murals of comets and stars and planets on each side, painted on with what looked like glittery nail polish.

I wondered if I would have to submit a formal application to be the town freak, or if being related to Grandma meant I would be automatically awarded the title.

The taxi driver filled his stubbly cheeks with air and blew it out as he studied the front entrance. “This has gotta be the place, kid.”

Ebook available for kindle US, & sony