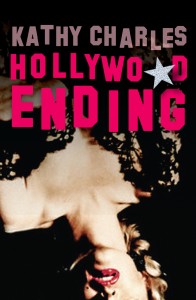 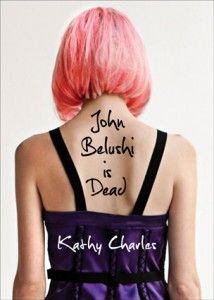 IN THE END WE ALL FADE TO BLACK.

Pink-haired Hilda and oddball loner Benji are not your typical teenagers. Instead of going to parties or hanging out
…more IN THE END WE ALL FADE TO BLACK.

Pink-haired Hilda and oddball loner Benji are not your typical teenagers. Instead of going to parties or hanging out at the mall, they comb the city streets and suburban culs-de-sac of Los Angeles for sites of celebrity murder and suicide. Bound by their interest in the macabre, Hilda and Benji neglect their schoolwork and their social lives in favor of prowling the most notorious crime scenes in Hollywood history and collecting odd mementos of celebrity death.

Hilda and Benji’s morbid pastime takes an unexpected turn when they meet Hank, the elderly, reclusive tenant of a dilapidated Echo Park apartment where a silent movie star once stabbed himself to death with a pair of scissors. Hilda feels a strange connection with Hank and comes to care deeply for her paranoid new friend as they watch old movies together and chat the sweltering afternoons away. But when Hank’s downstairs neighbor Jake, a handsome screenwriter, inserts himself into the equation and begins to hint at Hank’s terrible secrets, Hilda must decide what it is she’s come to Echo Park searching for . . . and whether her fascination with death is worth missing out on life.

How did I get this book: ARC from MTV

Why did I read this book: The publisher contacted me and offered a review copy and after reading the blurb I thought I would like to try and read it.

Hilda and her friend Benji are a couple of teenagers who live in LA and go around visiting sites of celebrity murder and suicide. In one of these incursions, in search of the apartment in which an old Hollywood actor stabbed himself to death with a pair of scissors, they end up in a rundown Echo Park apartment where an elderly, bitter man called Hank lives. Recognising his loneliness, Hilda starts visiting Hank often and sharing stories over watching old Hollywood movies and then striking yet another friendship with Hank’s neighbour, Jake. As Hilda’s friendship with both Hank and Jake develop, hers and Benji’s start to fall apart.

John Belushi is Dead is quite an interesting book, one that provided me with a fascinating journey.

Starting with Hilda and Benji’s interest in the macabre side of LA/Hollywood and its celebrities. The narrative is constructed in a very clever fashion by introducing its main characters in the middle of one of these raids and then interspersing the text with glimpses into their past. Hilda and Benji have been brought together by a fascination with death, albeit for different reasons. Hilda’s motivations are clear to herself and to the reader: the sole survivor of a horrible car crash that killed her parents, she feels like she has cheated death and is only buying her time until it catches up to her. Hilda is of course, the narrator, the main character, the one that makes it possible for the reader to connect with or possibly even relate to. Benji, on the other hand has no similar back story and his motivations are a bit shadier. Why is this important?

Because most of the book is spent on sites where death occurred or with the characters talking about death. And the author doesn’t shy away from graphic details either. I admit to feeling extremely uncomfortable reading about crimes, suicides, accidental deaths of celebrities and I felt very much like a voyeur. It felt a bit too morbid for me and very difficult to understand where these characters were coming from. We are talking about visiting sites such as where Sharon Tate died, or where James Dean’s car crashed or buying “memorabilia” such as tiles from a famous actress swimming pool.

This book brought to mind something that author John Green talked about in an event I attended recently, an analogy between mirrors and windows and how sometimes when we look at someone we are looking at a mirror and seeing ourselves or what WE expect that person to be or behave when in reality we should be looking through a window. I think that this analogy can also be applied to books and reading and how sometimes, we read excepting to find a certain story and expecting the characters to behave similarly to how we would behave when in fact, a book is a window into a different world. Although I do think that it is possible to combine both when reading: depending on how you focus your eyes, you can look into a room via a window and still be able to see your reflection. Meaning: it is, I think rather impossible to distance oneself completely when reading.

But nevertheless I was extremely aware of this analogy when reading this particular book and how it felt utterly incapable to understand what could possibly move these characters into talking about or visiting these places. What is a statement to the writer’s ability is the fact that beyond the uncomfortable feeling, there was also an element of interest. And that comes from the fact that the writer expertly handles her subject by introducing a plethora of characters with different motivations (going back to the last paragraph) and exploring the different ways that people deal with death and with Dark Tourism (which is what Benji and Hilda are effectively doing here) : from curious morbidity to exploitation, from sympathy to genuine care and remembrance.

I spoke about my journey as a reader when reading this book and this is part of it. That at the same time that the morbidity and the interest on these deaths felt wrong to me, I also had to confront the fact that I too, have done something similar before. I have visited a concentration camp in Austria; a town that has been decimated by the Plague in England; a battlefield in Scotland; and just last Sunday I was walking through a small town cemetery looking at old graves. As much as I would like to think that I did all these in remembrance and in a respectful manner, who is to say that there isn’t an element of voyeurism and morbidity? For that realisation alone, the book was well worth the read.

Having said that, as it happens with all good books that deal with death, this is a book about life and the living, and having to carry on living despite past mistakes, difficulty, loss and grief. And as the plot it builds up with darkness, Hilda starts to see the light at the end of the tunnel and a way out if it. I loved her different relationships and way of connecting with all characters: her memories from her hippy parents; her problematic dealings with her aunt who is now raising her; her budding romance with Jake; her strange, difficult relationship with Bejji and her even more difficult friendship with Hank.

The original title John Belushi is Dead when it was first published in Australia was Hollywood Ending and both the title and cover of the book are , I think, more fitting than the US ones. Not only because they point to the fact that book is dark and possibly disturbing but also the title is twofold. It refers to both that idealised, happy Hollywood Ending and to the real, it happens-too-often Hollywood Ending.

And that brings me to the ending of the book itself and how it feels disconnected to the remainder of the book. The build up is such that I believed an all-around happy Hollywood Ending would be not only impossible but also unwelcomed and unrealistic. When it does happen, it feels like a cop out. Although of course I was rooting for a good ending for Hilda, I found the Hank-ending and the Benji-ending extremely problematic.

The first because it feels like erasing a problem, and forgetting something that should not be forgotten which is ironic, given the context of the novel. The fact that Hank is allowed an ending of his own choosing is somewhat beautiful but at the same time unsettling because his past slips away and there are no repercussions (to him or to Hilda) whatsoever. The Benji-ending is an even bigger issue because throughout the entire novel , it is made very, very clear that Benji has extremely serious issues and is potentially a dangerous person. His ending is simplistic and unrealistic within the context of the novel.

Ultimately, I enjoyed John Belushi is Dead very much. It is very different from what I usually read and I appreciate it for taking me to places I didn’t even know existed – both in fiction and reality.

We watched Double Indemnity, one of my favorites, and whatever discomfort may have existed between us melted away. I was a firm believer in the unifying force of art in all its forms: a shared love for a movie, book, or song could transcend all other obstacles in a relationship. Hank reminded me of a song by Tom Waits, or a novel by John Fante. For all his cragginess, there was an underlying soulfulness, and his words floated in the air like the music of a raspy trombone or a wailing saxophone.

Reading Next: I have no idea!