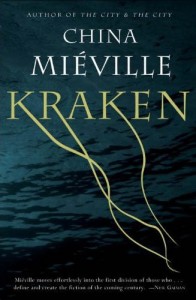 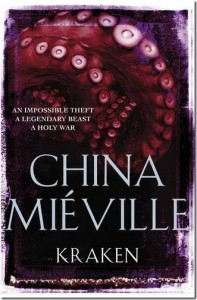 With this outrageous new novel, China Miéville has written one of the strangest, funniest, and flat-out scariest books you will read this—or any other—year. The London that comes to life in Kraken is a weird metropolis awash in secret currents of myth and magic, where criminals, police, cultists, and wizards are locked in a war to bring about—or prevent—the End of All Things.

In the Darwin Centre at London’s Natural History Museum, Billy Harrow, a cephalopod specialist, is conducting a tour whose climax is meant to be the Centre’s prize specimen of a rare Architeuthis dux—better known as the Giant Squid. But Billy’s tour takes an unexpected turn when the squid suddenly and impossibly vanishes into thin air.

As Billy soon discovers, this is the precipitating act in a struggle to the death between mysterious but powerful forces in a London whose existence he has been blissfully ignorant of until now, a city whose denizens—human and otherwise—are adept in magic and murder.

There is the Congregation of God Kraken, a sect of squid worshippers whose roots go back to the dawn of humanity—and beyond. There is the criminal mastermind known as the Tattoo, a merciless maniac inked onto the flesh of a hapless victim. There is the FSRC—the Fundamentalist and Sect-Related Crime Unit—a branch of London’s finest that fights sorcery with sorcery. There is Wati, a spirit from ancient Egypt who leads a ragtag union of magical familiars. There are the Londonmancers, who read the future in the city’s entrails. There is Grisamentum, London’s greatest wizard, whose shadow lingers long after his death. And then there is Goss and Subby, an ageless old man and a cretinous boy who, together, constitute a terrifying—yet darkly charismatic—demonic duo.

All of them—and others—are in pursuit of Billy, who inadvertently holds the key to the missing squid, an embryonic god whose powers, properly harnessed, can destroy all that is, was, and ever shall be.

How did I get this book: Bought ebook

Why did I read this book: Because I’ve heard nothing but praise for China Mieville; because he just won the Arthur C. Clarke Award for the third time; because tentacled monsters of the deep ROCK; because I love H.P. Lovecraft and anything even remotely Lovecraftian; because I got a sweet deal on the ebook.

Well, let’s start out by being blunt, shall we? Kraken really, really was not my cup of tea. Convoluted plotting, glacial pacing, plus hollow characters – no matter how intelligent or geek-tastic the writing – does not an engrossing read make. Suffice to say, my first exposure to the esteemed China Mieville did not go well.

With that off my chest, let’s backtrack.

Kraken is the story of Billy – middling-level curator at the at the Natural History Museum in London. In addition to preserving cephalopods (a job Billy has remarkable skill at), Billy’s other primary responsibility is to guide the daily tours of the museum. It is on one such tour that Billy leads his group to the department’s pièce de résistance – an honest to goodness, six meter-long preserved Giant Squid – when he makes an impossible discovery. The giant squid has somehow disappeared.

With the squid’s disappearance, Billy’s life is turned upside-down. Everyone seems to think Billy knows something about the missing squid. First a bizarre secret police unit called the FSRC (a sort of BPRD-esque/Torchwood-y government shadow organization for the occult) tries to recruit him. Then, Billy is abducted by a strange, dangerous duo and shoved into a magical London, as he’s hounded for his suspected knowledge of the missing Kraken. And even more bizarrely, Billy is saved by a former museum employee and Teuthist, forced to drink some crazytrippy squid ink, and hallowed as a prophet by the Teuthy-kraken worshipers.

And all that’s really just the tip of the iceberg. Billy learns that there are other parallel realities, where the Newtonian physics don’t apply – complete with space-folding origami masters, evil overlord talking tattoos, demonic henchmen, over-zealous cultists, chain-smoking psychic policewomen, and all kinds of familiars and magic-wielders. Everybody wants a piece of Billy, but the mystery remains – what happened to the giant squid? And is the apocalypse truly nigh?

So what happened? What, exactly, got lost in translation from theory to practice?

How can I describe my first impression of China Mieville, via Kraken. It’s kind of like…if someone took the awesome imaginative scope of Neil Gaiman, but replaced his characters with hollow analogues and then destroyed the beauty of Gaiman’s prose by way of forced, dare I say pretentious, erudition. Tack on a few utterly pointless sideplots whilst burying any remaining spark of story in unnecessary length (effectively sucking out any existing Lovecraftian/pop-culturian fun) and…well, then you have Kraken.

Perhaps the best way to describe this bizarre tangle of a story is with a single word: OVERKILL.

There are fabulous ideas in the novel, and wondrous strange possibilities. A possessed Captain Kirk doll. A kraken-lackin’ apocalypse (terrible pun, I apologize). An awesome new urban fantasy-style take on London Town. And yet…all of these ideas together was too much. The superfluous – but cool – details took over to the detriment of the story (e.g. after a hundred plus pages of Wati in Kirk-form, the “oh cool!” factor wears off and simply becomes tiresome). What begins as a quirky bizarre trip into psychedelic squid ink and a whole new side of London very quickly becomes a quagmire of randomness. The actual main plot-line of the novel – the mystery of the disappearing squid and Billy’s role in it all – is overshadowed, lost in so much nonsensical bric-a-brac. And that’s to say nothing of the characters! Billy, our protagonist (I guess) is oddly soulless, lacking any true personality or voice. Collingsworth is a caricature of sexy-hardass police officer, looking cool while smoking her ciggies and effortlessly wearing her costume-like uniform. The cultists are predictable minions, the supernatural creatures of London not really that original or memorable (even Goss and Subby feel reminiscent of Gaiman, but lacking the necessary wit or charisma). Don’t even get me started on the utterly superfluous character, Marge (ironically, her full name is Marginalia, although her facetime in the story is anything but marginal).

In other words, Kraken is fun-quirky-randomness gone amok in a really unsatisfying way. Overkill.

The same applies to the writing style. Now it’s no secret that Mr. Mieville is a very intelligent person (holding a B.A. in Social Anthropology from Cambridge, and a PhD in International Relations from the London School of Economics in addition to his other academic and literary accolades), and this extends to his writing. The man has an extensive vocabulary and isn’t afraid to use it, an admirable trait to be sure. But…there’s a point where Kraken crosses the line from oddly entertaining delight to forced, awkward tedium. For example:

There was a many-dimensional grid of geography, economy, obligation and punishment. Crime overlapped with faith — “Neadsen’s run by the Dharma Bastards,” Dane said — though many guerrilla entrepreneurs were secular, agnostic, atheist or philistine ecumenical. But faith contoured the landscape.

(At times, the writing put me in the mind of that episode of Friends when Joey discovers the Thesaurus.) (I’m not saying that Mr. Mieville needs a thesaurus – doubtless, he is a depository of a formidable amount knowledge, a veritable vocabularean Hercules – but it’s the kind of writing that feels forced instead of effortless; and unintentionally comical at times with how roundabout each sentence could be.)

Obviously, this review is just my personal opinion, as Mr. Mieville has won many distinguished awards and enjoys immense success at the top of the British new weird SFF genre. This particular book – the particular writing style – simply left me cold. It’s not my cup of tea. Bowl of kraken-juice. Plate o’ calamari. Take your pick.

In parting from this sadly underwhelmed review, there is a particular passage from Kraken that I think sums up my feelings towards the novel perfectly:

The Teuthex recited the service, his words drifting in and out of English, into Latin or Pig Latin, into what sounded like Greek, into strange slippery syllables that were perhaps dreams of sunken languages or the invented muttering of squidherds, Atlantean, Hyperborean, the pretend tongue of R’lyeh. Billy had expected ecstasy, the febrile devotions of the desperate speaking in tongues or tentacles, but this fervour — and fervour it was, he could see the tears and gripping hands of the devout — was controlled. The flavour of the sect was vicarly, noncharismatic, an Anglo-Catholicism of mollusc-worship.

The sea’s full of saints and it’s been full of saints for years. Since longer than anything. Saints were there before there were even gods. They were waiting for them, and they’re still there now.

Saints eat fish and shellfish. Some of them catch jellyfish and some of them eat rubbish. Some saints eat anything they can find. They hide under rocks; they turn themselves inside out; they spit up spirals. There’s nothing saints don’t do.

Make this shape with your hands. Like that. Move your fingers. There, you made a saint. Look out, here comes another one! Now they’re fighting! Yours won.

There aren’t any big corkscrew saints any more, but there are still ones like sacks and ones like coils, and ones like robes with flapping sleeves. What’s your favourite saint? I’ll tell you mine. But wait a minute, first, do you know what it is makes them all saints? They’re all a holy family, they’re all cousins. Of each other, and of . . . you know what else they’re cousins of?

Alright now. Who was it made you? You know what to say.

Additional Thoughts: Apparently (and fittingly), China Mieville is a huge H.P. Lovecraft fan. I, too, happen to be a Lovecraft fan, and yet, beyond a Cthulhu namedrop, there’s very little actual Lovecraft in Kraken. One story I kept thinking about whilst reading Kraken was “Dagon” – one of my personal favorites, and a short story that clearly Mr. Mieville pays homage to (in spirit if not truly in form, considering the heft and density of Kraken). 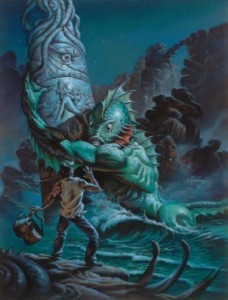 Then suddenly I saw it. With only a slight churning to mark its rise to the surface, the thing slid into view above the dark waters. Vast, Polyphemus-like, and loathsome, it darted like a stupendous monster of nightmares to the monolith, about which it flung its gigantic scaly arms, the while it bowed its hideous head and gave vent to certain measured sounds. I think I went mad then.

You can read the full story online for free, HERE.

Rating: 5 – Meh; I want to give Kraken a 6 because it’s not a BAD book, but for me and my personal reading tastes? I have to go with my gut and stick with the underwhelmed 5. I *will* give China Mieville’s other works a try in the future, however. Starting with another ocean-centric novel, The Scar.

Reading Next: Peter and Max by Bill Willingham