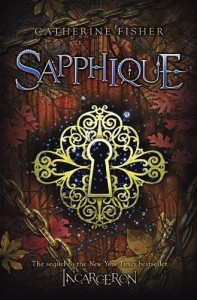 Finn has escaped from the terrible living Prison of Incarceron, but its memory torments him, because his brother Keiro is still inside. Outside, Claudia insists he must be king, but Finn doubts even his own identity. Is he the lost prince Giles? Or are his memories no more than another construct of his imprisonment? And can you be free if your friends are still captive? Can you be free if your world is frozen in time? Can you be free if you don’t even know who you are? Inside Incarceron, has the crazy sorcerer Rix really found the Glove of Sapphique, the only man the Prison ever loved. Sapphique, whose image fires Incarceron with the desire to escape its own nature. If Keiro steals the glove, will he bring destruction to the world? Inside. Outside. All seeking freedom. Like Sapphique.

How did I get this book: Review Copy from BEA

Why did I read this book: I read Incarceron earlier this year and loved it – so it goes without saying that I was thrilled to grab a copy of Sapphique at BEA this year. And when Ana and I decided to run a BEA Appreciation Week, I could not resist picking this book up first (even if its official publication date is in December!).

WARNING: This review contains necessary SPOILERS for book 1 in the Incarceron series. If you have not read INCARCERON and do not wish to be spoiled, I suggest you stop reading immediately! YOU. HAVE. BEEN. WARNED.

It has been four months since Finn – that is, the long lost Prince Giles – has been rescued from the clutches of Incarceron by Claudia, leaving Keiro and Attia behind. All is not happy in the Realm outside, however, as Finn struggles with his guilt at leaving his bond brother behind, and with his newly assumed role as the Prince Heir. Those at court grudgingly accept him as Prince Giles, but Finn’s ineptitude at politics, manners, and overall lack of charm makes him a vulnerable target for the conniving queen and her lackeys. Finn will not rest until he’s able to save his friends from Incarceron, but with Claudia’s father made his last trip to Incarceron, he made sure to damage the portal to the prison – they fear, irreparably. While saving everyone in Incarceron seems like more of an unattainable dream each day, Claudia and her master Jared tire of trying to protect the blundering Finn, with his lack of courtly finesse. When another young man shows up, claiming to be the true Prince Giles, all of their tenuous plans to take back the Realm are in shambles.

Meanwhile, back in Incarceron, Keiro is furious with his escaped brother, and determined to find a way out at any cost. Attia, desperate to believe the best in Finn tags along with Keiro – but she’s scared of what Keiro might do to achieve his dream of freedom. Their travels cross paths with a (most likely insane) illusionist named Rix, who claims to have the fabled Glove of Sapphique – and a way out of Incarceron.

And Incarceron itself is awake and hungry, crazed and determined to escape itself, with Sapphique’s glove as the key.

This second book, rounding out the Incarceron duology, is…well, bizarre. In a good way. Sapphique is a fantasy novel, a dystopian novel nd, strangely enough, a science fiction novel all at the same time. By its end, Sapphique is a bizarrely surreal and strange sort of book, defying simple answers or conclusions – which makes it that much more rewarding a read. In fact, what I love the most about this book is how complicated – and very genuine – everything in the book is, from characters to plotting. In the realm of character, protagonist Finn faces numerous hurdles beyond Incarceron, and with his own supposed friends and allies. At court, Finn finds himself out of his depth with court intrigues and the Queen’s machinations; when the pretender shows up, he seems to be more Giles than prison-hardened Finn could ever be. Finn’s impotence when dealing with the court and his disinterest in the throne are frustrating, but utterly genuine and understandable given the hell he has been trapped in for the past few years, and his own missing memories. More frustrating than Finn, however, are Claudia and Jared. Claudia REALLY got on my nerves throughout Sapphique – she’s undoubtedly had a rough time of it as the daughter of Incarceron warden John Arlex, but her shortness with Finn, her doubts and her frankly idiotic behavior with the Giles impostor, well, it’s not very flattering. Regardless of my own distaste of her character, i cannot deny that the reason she is so infuriating is because she’s written so well – instead of idealizing her characters, Ms. Fisher does not shy away from the selfishness inherent in everyone, and that goes doubly for Claudia. After all, she is the adopted daughter of a ruthless warden, and has learned to look out for her own interests first. There’s also the terminally ill Sapient Jared, Claudia’s teacher (and maybe more? They have an…interesting relationship), who, despite his blandness, plays his own special role in the book.

Keiro and Attia are my favorite characters of the bunch, behind Finn – probably for the reason that they’re the most forthright. Poor Attia never really gets her due; for her devotion to Finn and her determination to set things right in Incarceron, she’s poorly treated by all those around her. While that sucks, again, I give props to Catherine Fisher for writing this unflinching realness. Keiro is a charming rogue who only cares about himself, but unlike Claudia, has no pretenses or delusions otherwise. I love the complicated relationship he has with Finn and his own moral ambiguity – it makes for a varied read, and seeing these less than perfect, less than beautiful, at times flat out ugly characters makes Sapphique the beautifully brutal novel that it is.

Even more important than the characters, however, are the intricacies of Incarceron and the mystery of Sapphique. In Incarceron, Ms. Fisher intertwines her story with the legend of Sapphique, the only man to ever escape the prison’s clutches. In Sapphique, the mythology of the titled character is expanded on – convoluted and confusing at times, yes, but also rather lovely. The same can be said for the story and world at large. I loved the blend of mysticism with technology both inside Incarceron and in the realm beyond. One rather effective theme that Ms. Fisher plays with is that of illusion versus reality – how free can someone really be from an all seeing prison? Is the Realm any better of a world than Incarceron? The juxtaposition of the crumbling of the outside world with its decayed technology and the cold cruelty of Incarceron is sobering and thought-provoking. And, by the novel’s end, I loved how everything ties together in a very strange, bittersweet kind of way. Though it has its lapses with infuriating characters, some confusing elements in terms of the mythology of Incareron and Sapphique, I finished the novel feeling satisfied and impressed. This is not your traditional YA conclusion, make no mistake of that – there is no real “love story,” no black and white heroes and villains…but i think that’s what i loved about the book the most. Nothing is glorified, and even the book’s resolution is discordant. In a good way. Perhaps Sapphique isn’t for everyone, but it certainly worked for me.

Notable Quotes/Parts: Though there’s no official excerpt for Sapphique online yet, you can read more about the book including Catherine Fisher’s inspiration for the duology HERE.

Additionally, you can read an excerpt for Incarceron (book 1) HERE.

Verdict: I initially gave the book a 7 but on further reflection, this is some original, risk taking stuff, and i have to upgrade to an 8. Sapphique is a fitting conclusion to the duology, taking huge chances with its somewhat untraditional approach to YA fantasy. Catherine Fisher has a gift for storytelling, and the writerly guts to back it up. Absolutely recommended to those looking for something a little different than the norm.

Reading Next: The Enemy by Charlie Higson

Book of the Month: The King’s Favorite