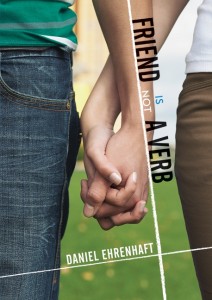 Title: Friend is not a Verb

Henry “Hen” Birnbaum’s sister, Sarah, missing for over a year, has come home unexpectedly, with no explanation at all. But he can’t leave well enough alone; Hen needs to figure out why she disappeared, even if she won’t tell him. It’s not like he has anything better to do. His girlfriend just dumped him and kicked him out of their band. He can’t play the bass worth crap anyway. His social life consists of night after night of VH1 marathons with his best friend and next-door neighbor, the neurotic Emma Wood.

Hen’s sure the answers to Sarah’s lost year lie with Gabriel Stern – Sarah’s friend from college who also happens to be a twenty-two-year-old fugitive from the law and Hen’s bass teacher . . . too bad he can’t play bass worth crap either. A month into his quest, Hen has had countless consultations with Emma, watched approximately fifty-three reruns of Behind the Music, and made one new Facebook friend. Unfortunately, he’s no closer to any revelations about his sister. The thing is, he’s too distracted to notice it, but while Hen’s been looking for all the answers, something mind-blowing happened: He got a life.

How did I get this book: Got me a signed copy at BEA!

Why did I read this book: I just really liked the cover, the blurb. Sounded like a good Contemporary novel…..

I am very, very conflicted about this book. This review – or perhaps I should say, attempt at discussion – is going to be long and will probably contain (minor) spoilers. But it can’t be any other way in order to adequately express how I felt about the book.

In one level Friend Is Not A Verb is a pretty cool novel. It is quirky, witty and peculiarly executed. Henry Birnbaum, Hen for short, is a rock-star in the make, a bass player for PETRA, the band led by his girlfriend of the same name. The book opens as Petra ditches/fires him on the same day that his sister Sarah comes back after disappearing for one year and it basically explores his relationships:

with his parents and how they know why Sarah left but won’t tell him;

with Sarah, who was always his friend and ally against their parents’ neurosis and how her leaving left a hole in his life and his feelings of betrayal when she returns and still won’t tell him;

with Sarah’s friend Gabriel, also a bass-player who becomes his teacher and sort of an Obi Wan Kenobi figure;

with Petra and the band PETRA;

with his best friend Emma Wood who he might have non-friendly feelings for.

The quirkiness comes from Hen’s decision to embrace the craziness of his life by deciding that the answer to all his problems is to become a rock star. When this is done, he starts to have visions of his future, and part of his narrative reads as a VH1 Classic’ documentary as though Jim Forbes, the narrator of Behind the Music is telling his story. Very subtly though, the writer shows us that this is nothing but escapism. For example, Hen wants to be a rock star but doesn’t like practising because it hurt his fingers and he also is very much in denial about his feelings for Emma; His interactions with Gabriel were definitely interesting and there is even a Fantasy sub-thread in which some of his and Emma’s dreams becomes reality (I am not too sure how well these work though).

I enjoyed the story, the set-up and I liked the friends-to-lovers romance between Hen and Emma, which is always a plus. Hen reads like a real teenage boy, with his dreams of grandeur and terribly awkward moments. And I REALLY liked the writing too with some excellent turn of phrases and I would definitely like to read another one of Daniel Ehrenhaft’s books.

My reading experience was hindered by many things.

First: even though the book is supposed to be funny and light, it touches some really serious issues but without really delving into them. Many times, I thought we were THIS close from an excellent book when the story tapped on these but we were pulled back in the last minute. A couple of examples: it was clear that Emma’s dad had a drinking problem. This certainly added a level of depth to her character, and could have made for interesting inner conflict but it was never really explored. This is ok though, partly because Emma is not the main character, partly because we don’t get her point of view. But there is one sequence in the book, towards the ending where Emma does a stint as a groupie for the band and when she does that, she drinks, a lot and feels as though she is about to become a drunk like her father. Hen thinks about that but only en passant and then she quits being a roadie and the subject is simply dropped as though it never happened. In fact, we learn about the reasons behind the roadie-drinking thing in a letter addressed to PETRA that HEN reads without PERMISSION (I am not even going to go there, because this review is already long and I still have a lot to say) and that’s how certain things are solved – they never get to talk about it. Case closed.

Another serious issue is the reason why Sarah disappeared. We are talking about fleeing the country with a group of friends, becoming fugitives in the Dominican Republic thinking they would NEVER EVER were going to be able to return, with the FBI searching for them. Sarah and Gabriel come back to try and fix things but they are still very much in hiding. Yet, there is very little that SHOWS me the seriousness of this situation. At one point it becomes ludicrous when Hen’s parents and Sarah insists that Hen takes bass lessons with Gabriel whilst at the same time saying something like: “just be careful because the FBI might just burst in“. The ending and the resolution of the mystery can only be described with one word: inane. Why they did what they did, how they did what they did, and how they eventually got out of it: inane .

But what really proved to be the most problematic for me, and what seems to be the crux of my conflict, the source of my problems with the novel is how certain things are said and done and thought by Hen and others which I am not sure what to make of.

Like for example, when Sarah and her friends who are all in their early twenties and when they are living in the Dominican Republic, their neighbour is a 84 year old former NAZI whom they become friends with and one of the girls starts a sexual relationship with. I am not going to say anything about the age difference because she is a 22 year old adult capable of making her own decisions. BUT the guy is a former KNOWN NAZI escaped from Germany and I just don’t see how anyone can just be ok with it. This is definitely an attempt of being “quirky” that is taken to the extreme. Since the subject of his possible redemption was never truly explored or addressed and he is just a minor character, I fail to see how this is interesting and to me, there is nothing remotely quirky or funny about associating with a former Nazi.

And then, there are sentences that are sparingly peppered throughout the text which made me stop and think about what I was reading:

Sarah was once worried that I didn’t have enough “guy friends”. After assuring her that I wasn’t gay, I reminded her that if Emma were a guy, I would have had a “guy friend”. Emma just happened to be female.

Then, Hen walks into a “strange black man” standing in the living room of Petra’s apartment (whom he knows to be halfAfrican-American) but he thinks the guy is a robber.

My jaw dropped, “You’re her dad? I gasped.
He giggled again. “Yeah, but don’t worry. Black people make me nervous, too.”

About having sex with Emma:

When going to a Journey concert and about those in attendance:

“why are all these retirement-age people showing him the love?”

Now, you might say I am taking things too seriously. Yes, it is fiction. Yes, we are talking teenagers here and we all know teens can be cruel and clueless. I am also not advocating that all books must address “issues” or that we, adults, don’t have our ugly moments or aren’t politically incorrect; but just like the Nazi neighbour, these sentences tap on important issues: racism, homophobia, teenage sex and how to address your elders and to me they come with a lot of weight when expressed in that manner, with what I see as negative connotations.

Now, the way I see it, these assertions made their way into the book either on “purpose” or by “accident”.

The former, would be a form of addressing them with sarcasm as a way of emphasising their wrongness. This view can be supported by for example how Hen thinks about the racist incident:

“the fact that he was black had made me nervous. I was a terrible human being”.

But this is the only instance of self-awareness as far as I can tell unless you think those quotes are meant to be sarcastic themselves – I am not entirely convinced.

The latter, it’s obviously the most problematic one. They are not meant to be taken seriously or in any negative way, they are just jokes, but when these things make their way,” innocently”, into books and people don’t think twice about them, that only helps perpetuating stupid stereotypes, bigotry and racism.

These are my own opinions drawn from the book which provoked these very specific reactions in ME. And I would love to discuss all this – if you read the book, let me know your views!

Notable Quotes/Parts:Gabriel was once in a band called Friends. I liked this part:

“The Band was more than a tribute to the show,” he said. “It was a tribute to the word itself. When we were little kids, ‘friend’ wasn’t a verb. You didn’t ‘friend’ someone. You had friends. It was only a noun. It didn’t multitask.” He sighed dramatically. “It was a simpler time, Hen.”

Verdict: Friend Is Not A Verb starts with a lot of potential especially considering the author’s prose and the quirkiness of the story. But there can such a thing as quirky-in- extreme and potentially inflammatory issues that are never truly, explored hindered the experience for me.

Rating: NO IDEA. I am so conflicted about the book, I honestly don’t know how to rate it.

Reading Next: The Rise of Renegade X by Chelsea Campbell.