Today’s guest is Urban Fantasist & Romance author Jennifer Estep. Jennifer is the author of paranormal romance series Bigtime (Karma Girl, Hot Mama, & Jinx), but this year she has thrown her hat into the Urban Fantasy ring with her Elemental Assassin series. The first book in this new series, Spider’s Bite follows Gin Blanco, known better by her assassin moniker, Spider – she’s the best at her job in all of Ashland, and has the ability to work magic in the elements of stone and ice. The second book in the Elemental Assassin series, Web of Lies his stores next week on May 25th!

To celebrate the upcoming release, we have invited Ms. Estep to talk about her writing, influences and inspirations for her Elemental Assassins series. (Plus, we also have a giveaway) 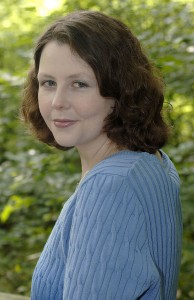 Please give a warm welcome to Jennifer Estep!

Greetings and salutations! First of all, I want to say thanks to the Book Smugglers for inviting me to guest blog today. Thanks so much!

As some of you may know, I’m the author of the Bigtime superhero paranormal romance series – Karma Girl (2007), Hot Mama (2007), and Jinx (2008). I also write the Elemental Assassin urban fantasy series and have three books coming out in that series this year – Spider’s Bite (which came out in February), Web of Lies (which debuts on May 25), and Venom (October). 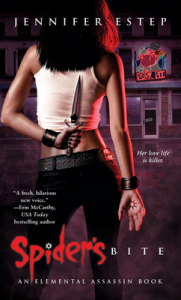 The Smugglers asked me to talk a little bit about my writing inspirations and influences today, and one of the topics that they suggested was what got me interested in writing urban fantasy since I had previously written paranormal romances. So why did I switch to urban fantasy?

Well, the short answer is because I like kick-butt heroines.

I’ve always loved books, movies, and TV shows where the heroine is just as strong – if not stronger – than the guys around her. Buffy Summers, Sydney Bristow, Wonder Woman – these are the kinds of female characters that I admire, girls who are just as comfortable dressing up to go to a party as they are diffusing a nuclear bomb or saving the world from vampires, aliens, and other creepy crawlies.

Don’t get me wrong. I think the heroines in my Bigtime paranormal romance books are pretty kick-butt themselves, especially Fiona Fine, the star of Hot Mama. But I had been wanting to write something darker and grittier with an even tougher heroine for a while. I’ve also always liked reading about assassin characters in fantasy literature, and I figured that urban fantasy was a genre that would let me combine all these things at once. Plus, there are so many great heroines in urban fantasy, folks like Rachel Morgan and Karen Murphy, and I wanted to add my own character to the mix. 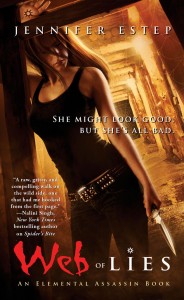 So I came up with my toughest heroine yet – Gin Blanco, an assassin known as the Spider. Gin makes no bones about the fact that she kills people for money, something that she’s very, very good at. I figured that if I was going to write an assassin character, I might as well go big or go home. There’s nothing worse than a whiny assassin. 😉

As much as I like shows like Buffy the Vampire Slayer and Angel, it seems like vampires are everywhere these days, and I knew when I started writing Spider’s Bite that I wanted to have some different kinds of magic/creatures in my books as well. So I decided on vampires, giants, dwarves, and elementals, or folks who can control one of the four elements – Air, Fire, Ice, and Stone.

For the record, Gin happens to be a Stone and Ice elemental, meaning that she can control both of those elements. But she’s just as happy to introduce you to the sharp end of the five silverstone knives that she carries with her at all times as she is to blast you with her magic. Like Gin says, there are dozens of ways to help people quit breathing, and she doesn’t need her magic to help her with that. 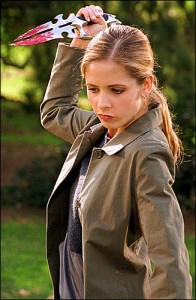 I’ll admit that it’s been a bit of a challenge to write such an unapologetic assassin character like Gin and make her likable at the same time. Gin isn’t your typical hero – she’s not inherently good like a Sydney Bristow or Buffy Summers is. But you know what? Bad girls always have more fun anyway. I think Faith on Buffy is a prime example of that.

So there you have it. Some of my inspirations for my girl Gin Blanco and the Elemental Assassin series. Writing Gin’s adventures has been a blast so far, and I hope that folks have as much fun reading the books as I do writing them.

What about you guys? Who are some of your favorite heroines, urban fantasy or otherwise? Share in the comments.

By night, Jen­nifer Estep is an author, prowl­ing the streets of her imag­i­na­tion in search of her next fan­tasy idea.

By day, Jen­nifer is an award-winning fea­tures page designer for a daily news­pa­per with a wide range of media and jour­nal­ism expe­ri­ence. She’s also a cer­ti­fi­able fan­girl and an author­ity on fan­tasy lit­er­a­ture and cul­ture. Jen­nifer is a mem­ber of Romance Writ­ers of Amer­ica, Sci­ence Fic­tion and Fan­tasy Writ­ers of Amer­ica, and other writ­ing groups.

Jennifer’s books have been fea­tured in Cos­mopoli­tan, Enter­tain­ment Weekly, South­ern Liv­ing, and a vari­ety of other publications.

You can read more about Jennifer on her website, or catch her on her blog.

We are giving away TEN AUTOGRAPHED copies of Spider’s Bite and Web of Lies to ten lucky winners! The contest is open to residents of the US and Canada only and will run until May 29 at 11:59 PM (PST). To enter, leave a comment here answering Jennifer’s question – who are some of your favorite heroines, fantasy or otherwise? Only one entry per person please! Good luck!