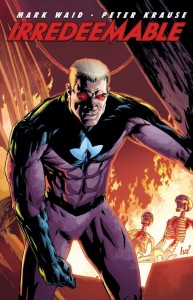 Stand Alone or series: This volume collects issues 5-8 of the ongoing series.

What if the world’s greatest hero decided to become the world’s greatest villain? The Plutonian’s deadly rampage continues. His former comrades-turned-victims are beaten, tired, and searching for hope. A “twilight of the superheroes”-style story that examines super-villains from Mark Waid, the writer of KINGDOM COME and EMPIRE!

Why did I read the book: I read and reviewed the first volume a few months ago and absolutely loved it.

Whoa. WHOA. A few months ago, I read, reviewed and LOVED Irredeemable volume 1, which collects issues #1-4 of this ongoing comic series. In that review I said I wished I had better words to convey how awesome this series is. I am still looking for them because things just got better – I honestly am head over heels in love with this series.

To recap: Irredeemable is about how the world’s greatest, most powerful superhero snaps overnight (or so it seems) and becomes the world’s greatest villain. In the first volume we see The Plutonian, committing despicable acts which include killing former allies and destroying entire cities such as Sky City, the one he was sworn to protect. The volume ends with The Plotunian sinking Singapore, effectively causing the death of millions. The story basically follows his former teammates trying to piece together the puzzle that is the Plutonian’s breakdown whilst trying to remain alive and out of his way until they can figure out how to stop him. Their last and only hope is to find The Plutonian’s nemesis, a super villain called Modeus who has disappeared from the face of the earth.

In this second volume Irredeemabl ( collecting issues #5-8) , The Plutonian’s motivations are fully explored and even sort of, revealed; further developments occur: we get to have a closer, in depth, complex look at the group of superheroes who are trying to bring him down; including a big reveal and plot twist regarding the twins Scylla (who was killed in the previous volume) and Charybdis that made me literally pump my fist in the air only to follow the action with a “Wait. Holy guacamole. That may have serious consequences yet” .

When I read the first volume, I mused about The Plutonian’s motivations. I wondered what could have possibly happened to steer such a great superhero out of his path. Part of me wished for a grandiose explanation that made sense and maybe even made him a little bit redeemable even after what he did. Part of me wished for the opposite. The latter is what happened:

The Plutonian’s motivations for going from an omnipotent superhero out to protect the whole world to being an omnipotent God of destruction are completely, utterly, supremely ….lame. And that actually makes it all better to me. Because it shows that he is only human as powerful as he might be.

Here you have a guy with absolute power and absolute responsibility. There is not a single minute of the day in which the Plutonian doesn’t hear and know everything about everybody. He is always, always connected with the people, and the slightest mistake can hurt millions. When that eventually happened because of his need for a break (a need that is completely understandable) , the consequences are dire, horrible and in the end, very personal.

But as understandable as it might be, the bottom line perhaps is this: does a superhero like that, with a power like that get to crumble under pressure? Does he get to have “personal” issues? And what about power? Does absolute power corrupt absolutely? The answer seems to point to a “yes” given what happens at the end of this volume with another character. Although one can argue that it wasn’t absolute power that corrupted The Plutonian, it was the difference between “public” and “private” and the weight of his responsibilities.

This story, this tale, is absolutely superb. The storyline is awesome: presenting great conflict both external and internal. The group of super heroes have a bunch of issues to work through before they can even think of stopping The Plutonian. And Peter Krause continues to impress me with his artwork. It suits the story perfectly: 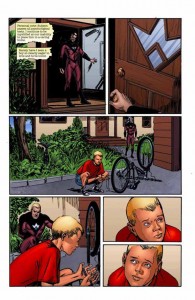 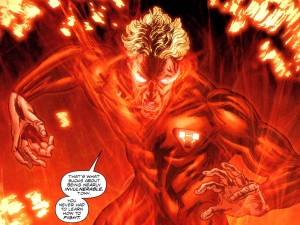 This volume ends with another cliff-hanger and I am trying to decide: do I wait for volume 3 to come out in July or do I go in search of the individual issues RIGHT NOW?

Notable Quotes/Parts: The entire freaking volume is worthy of quote but the Twist was AWESOME. I did not see it coming. Ha.Neither did the Plutonian.

Additional Thoughts:At the end of this volume, there is the usual collection of covers (amazing) plus a preview of another upcoming story by Mark Waid, Potter’s Field.

Also, look what I found over the weekend browsing my local comic book store and devoured promptly: a stand -alone single special issue of Irredeemable: 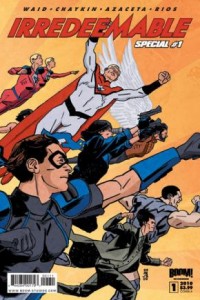 The first year of IRREDEEMABLE came to a cataclysmic resolution, and before the jaw-dropping second year starts, Mark Waid is delivering an original stand-alone issue! Join the AMAZING SPIDER-MAN team of Mark Waid and Paul Azaceta, along with legendary comics creator Howard Chaykin, and BOOM! Favorite Emma Rios for the IRREDEEMABLE SPECIAL! Showcasing a never-before-seen glimpse into the Plutonian’s heroic beginnings and insights into his former teammates, the once-great Paradigm. Secrets will be revealed! Clues will be given! Threads will be tied up! This is a not-to-be-missed chapter in Mark Waid’s twilight of the superheroes masterpiece!

This issue has three mini-stories around three important – not spoiling – people that will be essential to stop The Plutonian. One of them is dead. One of them has a unique power and heritage and one of them used to be a villain. The latter is the guy from Incorruptible another series connected to the world of Irredeemable and points to a possible convergence of storylines!

Verdict:Irredeemable vol.2 is every bit as good as the previous volume and I would not be surprised if this series became one of my favourite ever.

Reading Next: The King of Crags by Stephen Deas

Book Review: More Than This by Patrick Ness