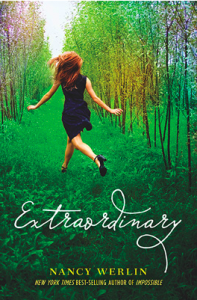 Phoebe finds herself drawn to Mallory, the strange and secretive new kid in school, and the two girls become as close as sisters . . . until Mallory’s magnetic older brother, Ryland, shows up during their junior year. Ryland has an immediate, exciting hold on Phoebe – but a dangerous hold, for she begins to question her feelings about her best friend and, worse, about herself.

Soon she’ll discover the shocking truth about Ryland and Mallory: that these two are visitors from the faerie realm who have come to collect on an age-old debt.*

*Synopsis has been shortened because it contains serious spoilers! (Don’t you hate it when synopses do that?)

Why did I read this book: I truly enjoyed Nancy Werlin’s first YA novel, Impossible, so when we were contacted by the author for a chance to review this book I was thrilled.

Phoebe is a single child, a sweet and genuinely kind girl, and a beloved daughter to her powerful mother and gentle father. Above all else, Pheobe is a Rothschild; the youngest descendent in a long line of powerful, remarkable – even extraordinary – men and women. Phoebe’s mother is one such Rothschild, as an internationally renown businesswoman and academic. In comparison to her mother, Phoebe is just Phoebe – not dauntingly intelligent, not heartbreakingly beautiful or remarkably witty. Ever since her youth, Phoebe has felt self-conscious of the pressures and responsibilities that come with being a Rothschild, but her heart has ever been in the right place. When one day in seventh grade, a strange, dowdy girl named Mallory enters her class, Phoebe breaks with her popular friends and takes Mallory under her wing, determined to help the new girl fit in. When Phoebe learns that Mallory is responsible for watching over her mentally unstable mother, her heart goes out to the strange girl and she does everything in her power (and in her family’s power) to help the wounded family. As the years pass, Phoebe and Mallory become true best friends – Mallory blossoms into a beautiful, willowy and outspoken young woman, while Phoebe, though much more plain, remains the dependable, generous and kind-hearted girl she has always been. The bond between the two girls seems unbreakable…but for the fact that Mallory hides a terrible secret.

All the time she has known Phoebe, Mallory has been on a mission to manipulate the youngest Rothschild daughter – to befriend her, and then to crush her. For Mallory is no regular girl; in fact, she is a fairy, and one of a dying race on the most important mission from her queen to save her kind. After years of working her way into Phoebe’s good graces with no results, however, Mallory’s effectiveness (and her dedication to her very serious mission) comes under question. Displeased with her lack of progress, the queen sends Ryland – Mallory’s half-brother – to finish the job. As Phoebe becomes enamored with Mallory’s mysterious (and never before mentioned) brother, Phoebe’s friendships, family life, and self-image falls to pieces. Phoebe is a pawn in a much larger, older bargain, and it is up to her to rise above and save herself: to become truly extraordinary.

Nancy Werlin’s second YA Fantasy novel is every bit as beautifully written as her first – there is a lyrical quality, an almost otherworldly feeling to the prose of Extraordinary that compliments the story perfectly. Each chapter of Phoebe’s story is alternated with Mallory and Ryland’s asides with the fairy queen, creating an ominous, nightmarish dream quality as the story unfolds, and I loved the choice of the third person narration (as opposed to the standard first person point of view). Phoebe’s thoughts, fears and uncertainties are laid bare to the reader, but the third person perspective also means that there is no unreliable narration to take into consideration – and considering that Phoebe is glamoured for much of the novel, this makes for a more…understanding read. I say understanding – and this is important – because for much of the novel, Phoebe is an incredibly frustrating character. Not that this is her fault! As I said before, she’s glamoured and under the manipulative Ryland’s spell. Because of the choice of narration and because we readers know that Ryland and Mallory are faries intent on sucking dry Phoebe’s last drop of self-worth, Phoebe’s behavior is a bit more palatable and, yes, understandable.

Unfortunately, it doesn’t change the fact that Phoebe, for a good majority of the book, is (again!) incredibly frustrating. Forsaking her friendships for a boyfriend, unable to talk to her family about her feelings – it’s grating stuff. That said, there is strength to Phoebe and everything comes together in the end. One can hardly expect a human to shrug off fairy glamour, but as the story progresses Phoebe does find her voice in spite of the brutal, cruel manipulation she has endured – and by the book’s dramatic conclusion, it’s almost worth all the frustration. In contrast, the fairy characters of Mallory and Ryland are wonderfully ambiguous and layered – Mallory’s struggles with her duty to her people and her genuine love for Phoebe define the book, and even scumbag Ryland has understandable motivations.

There is a reason for why the fairies need Phoebe so badly, and what exactly they are trying to accomplish with all of their twisted machinations. Although it takes a shade too long to actually get to this point (far too much time spent on Phoebe’s turning to malleable putty in Ryland’s arms instead of actual forward momentum), the reveal is wonderful by the time it does roll around.

I think the thing that saves Extraordinary for me, however, in spite of the slower moving plot and frustrating character development (as understandable as this characterization may be) is the fact that this is a book centered around a friendship as opposed to the typical romance. Ryland’s interest in Phoebe is a mere means to an end – if you’re looking for some ‘sexy fairy bad boy on a mission to destroy innocent human girl but inadvertently falls in love with her and they live happily ever after (even though he sorely emotionally abuses her)’ story, Extraordinary is most emphatically not the book for you. Ryland isn’t evil, but he’s far from human – he does what he must to accomplish his mission, and that includes shattering Phoebe’s sense of self. He does not fall in love with her, or seek “redemption” through her or whatever silly, superfluous theme that seems to pervade so much YA Paranormal Romantic fiction.

No, Extraordianry is romantic, but in a different way; it is a story about Phoebe and Mallory and their friendship. In the end, it is the love these two girls feel for each other and the strength of their bond that holds the book together. I cannot stress enough how wonderfully refreshing this is, especially in a YA contemporary fantasy. There’s also a refreshing look at the ties of family (Phoebe and her mother’s relationship, in particular) and an evaluation of self. Instead of pegging her self-image and self-worth on how much other people love her, Phoebe makes a startling and wondrous revelation later in the book: she becomes her own champion.

What better – rather, what more extraordinary – message can there be? Even if the novel itself suffers from a stumbling plot and some stunted characterization early on, the friendship and Phoebe’s self-discovery makes the book memorable, at least in this reader’s opinion.

Conversation with the Faerie Queen, 1:

“You are ready for your mission, then, little one?”

“Yes. Except that I am somewhat—I am sorry, Your Majesty. Yes, I am ready.”

“You are anxious. Naturally. It is a great deal of responsibility. But remember, your way has been prepared. The Tolliver woman will believe you to be her own human daughter, miraculously restored to her. Grief, depression, and loneliness have caused her to lose herself, so she will gratefully accept your guidance in all things, young though you are. Managing her will be easy for you; you will give her certain human medications to keep her under your influence, and you will use her money for all your needs in the human realm.”

“I understand. And the Rothschild girl?”

“The girl is of course your main focus. You will observe her at school. I need not tell you again that everything—everything—depends on her.”

“The stakes are high.”

“Frighteningly high, at this point. It is useless to deny it.”

“Thank you for your trust and confidence, Your Majesty. I am humbled by it.”

“Rise to your feet, child. Bid farewell to the court and, especially, to your older brother. He is proud of you for having been chosen—and he is jealous too. Ah, I see by the flare in his eyes that I am correct. But you shall show him and all our people that I have not made an error in placing our trust in his little sister.”

“Yes, Your Majesty. Perhaps I will be home again, successful, in just a few human weeks.”

“Even if it takes longer, we will manage. We have three or four years left, by human count.”

“I will succeed with the girl long, long before that!”

“Good. You were ever a ferocious sprout.”

Chapter 1.
Phoebe Gutle Rothschild met Mallory Tolliver in seventh grade, during the second week of the new school year, in homeroom. Phoebe had had one of her horrific asthma attacks and couldn’t start school on time, but her so-called friend had kept her in the loop about Mallory. She couldn’t wait to talk about the peculiar new girl.

It was her clothing that marked Mallory out. “Every day,” Colette Williams-White said to Phoebe, “she wears something weirder than the day before. Yesterday, she had on this huge old T-shirt, like she thought it was a dress. But she had it on backward, with the tag sticking out at her throat. I mean, who wouldn’t notice they’d done that? And, you know what? It smelled. Or maybe that was her. Also, with it? High heels.”

Colette shook her head decisively. “The shoes were Christian Louboutin, in this marigold color, with ankle straps. Flowers on the toes, which—I know!—sounds like too much, but trust me, it wasn’t.”

“Could she just be expressing—”

“Stop it, Phoebe, okay? Because, frankly? Not only are you wrong, but it’s also really bitchy of you to keep arguing when I’ve met her and you haven’t. Actually? It’s bitchy and prissy, both.”

Additional Thoughts: We are currently giving away a copy of Extraordinary as part of our stop on the official book release blog tour! Make sure to check out author Nancy Werlin’s guest post about her Inspirations and Influences for the book, and enter for a chance to win this title.

Also, the Blog Tour continues! Here are the next stops as Extraordinary makes its way across the blogosphere:

Also, check out the book’s official website, which includes a bunch of wonderful extras, discussion questions, and book trailer, too.

Rating: 7 – Very Good; a tough call because of how frustrating so much of the book was, but ultimately a 7 for me because of the strength of the theme of friendship.

Reading Next: Lightborn by Tricia Sullivan