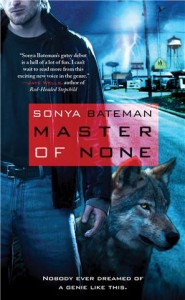 Title: Master of None

ONE UNLUCKY THIEF. ONE UNLIKELY GENIE. ONE VERY ODD COUPLE.

Gavyn Donatti is the world’s unluckiest thief. Just ask all the partners he’s lost over the years. And when he misplaces an irreplaceable item he was hired to steal for his ruthless employer, Trevor—well, his latest bungle just might be his last. But then his luck finally turns: right when Trevor’s thugs have him cornered, a djinn, otherwise known as a genie, appears to save him.

Unfortunately, this genie—who goes by the very non-magical name of “Ian”—is more Hellboy than dream girl. An overgrown and extremely surly man who seems to hate Donatti on the spot, he may call Donatti master, but he isn’t interested in granting three wishes. He informs Donatti that he is bound to help the thief fulfill his life’s purpose, and then he will be free. The problem is that neither Donatti nor Ian has any idea what exactly that purpose is.

At first Donatti’s too concerned with his own survival to look a gift genie in the mouth, but when his ex-girlfriend Jazz and her young son get drawn into the crossfire, the stakes skyrocket. And when Ian reveals that he has an agenda of his own—with both Donatti and the murderous Trevor at the center of it—Donatti will have to become the man he never knew he could be, or the entire world could pay the price. . . .

Why did I read this book: Urban Fantasy is a pretty large subgenre under the Speculative Fiction (and sometimes Romance) umbrella – but male-protagonist centered UF are significantly overshadowed by their female-centric counterparts. So, when I heard about Master of None, a new UF series that involves Djinn and features a dude as its protag, I was so very in.

Gavyn Donatti is an underachieving thief with a penchant for getting into and barely escaping ridiculously dangerous situations – while everyone else around him tends to get the short end of the stick. On his last job retrieving a plain hunting knife for one of the nastiest criminals on the East Coast, Gav finds himself in yet another pickle – he’s lost the merchandise. And now his employer, the terrifyingly cruel Trevor, is out for Gav’s blood. Just when he’s cornered by one of Trevor’s thugs and facing excruciating torture followed by imminent death, the impossible happens. Gavyn Donatti is saved…by a genie.

The Djinn identifies himself as Ian and disdainfully informs Gavyn that he is tied to the thief and will help Gavyn accomplish his “life purpose” – but not because he wants to. Rather, as an exiled Djinn, cut off from his clan, his wife, and other of his kind, Ian must help Gavyn in order to leave the mortal realm. Sort of. Things aren’t so simple as they appear, however, and much more is at stake than a simple hunting knife and a deranged crime boss out for blood. The Djinn have problems on a multi-dimensional scale, and Gavyn – along with his “friends” (if you can call snide Djinn, a pissed off ex-girlfriend and a horribly maimed former partner friends) are at the center of a high stakes battle for power.

Master of None is author Sonya Bateman’s promising debut effort, tackling the ever-growing Urban Fantasy subgenre – with a welcome twist. Instead of writing about a smart talking, sexily-clad, kick-ass chick with a big gun/sword/whip/etc, she goes the road slightly less traveled and pits an underachieving thief as her male protagonist. This, coupled with the fact that there isn’t a vampire, werewolf, fairy, witch, or zombie in sight, makes Master of None something of a novelty in a very familiar literary landscape. And hey, as an urban fantasy reader, I really, really appreciated this. Though not nearly so nuanced or effective as Rachel Caine’s take on the Djinn with her superb Weather Warden & Outcast Season books, Ms. Bateman has a good thing going with her memorable and basically unique universe in this debut novel. I loved the concept of the Djinn and their different clans, the struggle for power and the divides within the Djinn community, and, of course, the magic of which these supernatural creatures are capable.

In terms of writing and plotting, Ms. Bateman also excels, doing a damn fine job of scripting action that propels the plot ever onward. I love that Master of None begins as a fairly simple story (a dude and his tethered Djinn work together to stay alive) but ends in a completely different, complex place (the fate of the mortal and djinn realms are at stake). And for the most part, I very much enjoyed the characters. Gavyn, as a protagonist, is self-deprecatingly funny, and a welcome sight as he’s neither kickass, leather-clad, or suffering from delusions of self-importance. It’s kinda cool that he’s afraid of responsibility and that in many situations he’s actually yellow-bellied.

All this said, however, there were some problems with the novel that can’t quite go ignored. While Gavyn is largely a fun and memorable protagonist, the secondary characters all sort of pale in comparison. Ian, as the tough, badass Djinn remained a secondary character throughout to me, and I never felt the urge to learn more about him, nor did I care to relate to him. Jazz, Gavyn’s ex girlfriend and partner in crime, also felt a bit one note. One thing that really bugged me was how Gavyn himself had some moments of inconsistency and oddness – he goes on and on about being “unlucky,” but that’s hardly the case. Gavyn’s had myriad narrow escapes, and has emerged unscathed while his partners suffer horrible fates like getting busted, tortured, maimed or dead. I’d say that qualifies Gav as pretty damn lucky.

(On one last superficial criticism of characters, I really didn’t like the names of any of the characters (Gavyn, Jazz, Trevor, Cyrus, Lark, Taregan, etc). They all sound very…I don’t know. Artificial. Soap opera make-believe-ish. Of course, that’s a matter of personal preference.)

Also, there were inconsistencies on a magical system/worldbuilding scale. Things don’t quite add up – I love that Ms. Bateman puts power restrictions and limits on her characters, giving the djinn a set amount of energy they can expend before having to accumulate energy again, but the magic from the early portions of the book clash with the later portions of the story. For example, if power is so hard to store up, why would a Djinn waste energy on producing cigarettes or beer? Also, while I loved the idea of the different Djinn clans and their sort of totem animals, the explanations at times could feel a little data-dumpy, and not really as well executed as they could have been.

Just once, I would have liked to get my shit together. Even accidentally. But I could already see that wasn’t going to happen tonight. After all, I am the world’s unluckiest thief. Ask anybody.

The long-abandoned warehouse I’d stumbled across had seemed like a blessing, and the worn canvas bag wedged under my spare tire had been downright serendipitous. That was until I started stuffing my worldly possessions into it and the damned thing split down the seams. Out came everything, all over the concrete floor covered with dust and oil and Christ knew what else. The gunk would wreak havoc with my instruments.

As if that weren’t enough, one of the banded stacks of bills popped loose. The draft in the place snatched a handful of hundreds and whisked them off into the gloom in a flurry of papery whispers. Like the building was laughing at me.

“Crud!” My voice echoed in the empty space. I froze, dropped to a crouch behind my car, and listened. Nothing yet. I’d ditched the tail half an hour ago, but they’d find me again soon. I figured Trevor must have had my ride bugged while he briefed me—which meant they’d been tracking me for a week. They knew I’d hit the place four days ago and hadn’t shown up with the score yet. I might have found the bug if I hadn’t misplaced my scanner on my last run.

Since I hadn’t, my only chance now was to keep going on foot. I couldn’t talk my way out of this one.

I kept my mouth shut this time and started stowing fistfuls of bills in pockets. The lost cash would have to stay lost. Next came the essentials: cell phone, Mag-lite, lock jock, cutter, scrambler, electric pick, Bowie, SAK, wire, Magnum—unloaded, of course. I was a thief, not a murderer. Couldn’t say the same for Trevor. He was a vicious bastard, for a fence. Hell, I’d met dealers who were calmer than Trevor. I did jobs for him because he paid decent, but I suspected I’d be looking for a new place to sell my scores to soon. One with a little less psycho in his veins.

I’d have to scratch the clothes too. Not that they were much to look at. Bland, serviceable, meant for blending in. I’d buy more. Though I didn’t need it for warmth, I shrugged into my windbreaker for the extra pockets and headed for the only point of entry and exit I’d seen in the rundown structure. It bothered me, being in a place with just one escape route. Made it hard to formulate a backup plan other than get busted or die . . . two alternatives I’d managed to avoid so far. I hoped this time wouldn’t break my record—but I had my doubts.

You can read the full excerpt and more online HERE.

Additional Thoughts: Make sure to stick around as later today we have author Sonya Bateman over for an interactive Q&A, and a chance to win a copy of Master of None!

Verdict: Ultimately, Master of None is an enjoyable, fun read with its highs and lows. Though it kills in terms of conception and originality, it stumbles in the execution – but that’s something that can definitely get better over time. Sonya Bateman has certainly accomplished a solid, brave debut effort with this novel, and I’ll be sticking around for the next book in the series.

Rating: 6 – Good, with a lot of potential