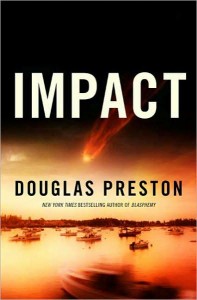 Wyman Ford is tapped for a secret expedition to Cambodia… to locate the source of strangely beautiful gemstones that do not appear to be of this world.

A brilliant meteor lights up the Maine coast… and two young women borrow a boat and set out for a distant island to find the impact crater.

A scientist at the National Propulsion Facility discovers an inexplicable source of gamma rays in the outer Solar System. He is found decapitated, the data missing.

High resolution NASA images reveal an unnatural feature hidden in the depths of a crater on Mars… and it appears to have been activated.

Stand alone or series: Stand alone novel (although a protagonist from this novel has been seen in a prior Douglas Preston novel)

Why did I read this book: I’m sticking to my vow to read more of different genres, and this sci-fi thriller was a good way to continue fulfilling that resolution. It’s a pre-apocalyptic type story about some crazyass gamma rays being beamed at Earth. How could I NOT be excited about this book?

One starry night in a small Maine fishing town, a meteorite races across the dark sky in a brilliant streak. The newspapers theorize that the meteorite hit somewhere in the Atlantic, and while a physically stunning event, is nothing more than another mundane space rock falling to earth. Abbey Straw, an intelligent, enterprising young woman, however, has other ideas. Out photographing the Andromeda Galaxy with her new Celestron six-inch Cassegrain telescope, she captures the meteroite on film – and using that image, she extrapolates the meteroite’s impact location, which was not in the ocean, but on a small island off the coast. Eagerly, Abbey sets out to find the meteroite, with the intent to sell it to the highest bidder. On the other side of the globe, ex-CIA agent Wyman Ford signs on for a contract job to Cambodia to find the whereabouts of a mysterious new mine, responsible for flooding the international market with new, and extremely deadly, gemstones called “honeys.” Meanwhile, an ambitious and intelligent scientist named Mark Corzo has just received a promotion to head a division of the National Propulsion Facility’s Mars Mapping Orbiter project, following the professional demise and murder of his former mentor. When Corzo receives a package in the mail from that same mentor, sent just days before his death, Corzo becomes consumed with shocking new data concerning gamma rays – originating from Mars. Abbey, Ford and Corzo’s lives are on a collision course, with one of the most important and most dangerous discoveries in the history of mankind.

I hadn’t had the chance to read any of Douglas Preston’s work – neither on his solo work nor his popular co-authored books with Lincoln Child (I have, however, seen and loved Relic). Impact marked my first exposure to the bestselling mainstream thriller/speculative fiction author, and, while I’m not jumping out of my seat, I generally had a positive experience with this novel. The prose is clean (if somewhat simple), and the story fast-paced and easy to keep straight, following the standard separate characters whose fates eventually merge storytelling technique to build tension. What I liked the most about Impact – what caught my eye in the first place – was the premise (unidentified object falling to earth) and the overall idea for the story (well, at least the science fiction element). Rather than being another meteorite/asteroid/comet on the way to decimate life on earth as seen in many apocalyptic works (see Additional Thoughts below for a list), Impact takes a slightly different, unexpected route. The object seen streaking across the Maine sky is no mere clump of ancient space rock, but something infinitely more sinister. While the SF and actual science on the whole is more than a little wobbly (e.g. the open acceptance of miniature black holes rampaging through our solar system and more than a few questionable applications of astrophysics), it’s not really that big a deal as Impact is far more of a summer blockbuster movie than hard science fiction tome. Which is perfectly cool by me.

With the good, however, comes a lot of the mediocre. The characters are decidedly flat and really stretch the limits of credulity. Abbey, the small town adventurer girl, is also a pre-med Princeton dropout (forced to leave after losing her scholarship when she failed Organic Chem) who “took a few astronomy classes” and knows how to calculate the origin and trajectory of any body from outer space (amongst myriad other technical and scientific skills), in addition to being a master sailor and intrepid adventurer. Then there’s Ford, the ex-CIA op who is your typical Jason Bourne-grade badass (with a heart and troubled conscience) – smart, dashing, dangerous, unbeatable in hand to hand combat, etc, etc, etc. There’s also a huge plausibility problem in terms of timing (how did the gem mining in Cambodia become so lucrative in such a short period of time, just days after the meteorite strike?), in the chain of command seen at the NPF (the fictional equivalent of JPL) and in the US government in general. There are more than a few Jerry Bruckheimer-esque scenes involving the president and policy makers -heck, the whole book is very Armageddon! Which isn’t always a bad thing, but unfortunately it just did not work for me here in book form because…well, the thing that disappointed the most with Impact was how there was so much time spent on mindless and almost completely unnecessary action scenes, with barely any focus on the only true interesting part of the book (that would be the science fiction element). The questions that the gamma ray analysis raises, the implications of these scientific findings are brushed away in a few scant conversations, replaced instead with car chases, flooding boats, and bar shootouts. It’s just not really my thing, and I found myself getting impatient with each chase scene.

That said, I should mention that I loved the ending – which was a bit anticlimactic, but in a good way (at least in my opinion). While I was disappointed in the disproportionate nature of the book, with the interesting parts only filling about a third of the final product, the writing is solid and I can understand why adrenaline junkies or more action-craving readers would be thrilled with Impact.

The trick would be to slip in the side door and get the box up the back stairs without making a sound. The house was two hundred years old and you could hardly take a step without a ?urry of creaks and groans. Abbey Straw eased the back door shut and tiptoed across the carpeted hallway to the landing. She could hear her father puttering around the kitchen, Red Sox game low on the radio.

Her arms hugging the box, she set her foot on the ?rst step, eased down her weight, then the next step, and the next. She skipped the fourth step—it shrieked like a banshee—and put her weight on the ?fth, the sixth, the
seventh…. And just as she thought she was home free, the step let out a crack like a gunshot, followed by a long, dying groan.

You can read the first two chapters online HERE.

Additional Thoughts: Though Impact doesn’t really qualify, there are quite a few books and films that embrace the ‘celestial bodies slamming into the Earth’ (or the Moon, or some Earthly neighbor) apocalypse. If you’re looking for some books in this, I highly recommend Larry Niven and Jerry Pournelle’s Lucifer’s Hammer (comet slamming into Earth). 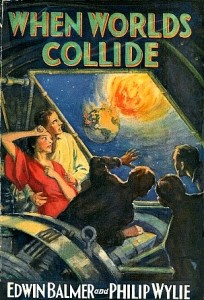 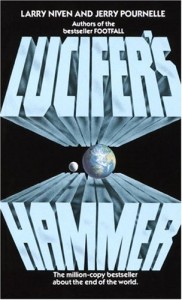 Other books worth checking out are “The Conversation of Eiros and Charmion” by Edgar Allan Poe (short story again about a comet), When Worlds Collide by Philip Wylie and Edwin Balmer (death of Earth by rogue planet), and of course, one of my personal favorites, YA novels Life As We Knew It and the dead and the gone by Susan Beth Pfeffer (in which an asteroid hits the moon and changes its orbit, unleashing disastrous, apocalyptic effects on Earth).

Verdict: Great premise and original idea, but somewhat lacking in the execution. Still, I enjoyed some parts of Impact and recommend it to any thriller fans looking for a light dose of science fiction.

Reading Next: Blackbringer by Laini Taylor

Over at Kirkus: A Chat With Jim C. Hines