Today’s Guest: Angie of the Young Adult/Fantasy/Speculative Fiction review blog Angieville. Angie runs one of our very favorite blogs, and has a knack for picking up and reviewing books that both of us Smugglers love. She’s one of our go-to sites for book ideas – if Angie likes it, chances are, we will love it too!

Please give a hand to Angie!

********************
Well, hello there, gentle blog readers! I got all excited when Thea and Ana’s invite showed up. This is my second annual Smugglivus appearance and it is fast becoming one of my favorite holiday traditions. I’m thrilled to pieces to be here again and for the past several days I have been taking notes as fast as I can. All these wonderful recs are going to make 2010 a seriously excellent reading year. I can feel it. For my part, I decided to go ahead and do a repeat performance of last year’s post. So today I’ll be handing out a handful of awards for my Best of ’09 books. Without further ado:
*drum roll*

Best Performance by a Heroine in a Recurring Role: Kate Daniels for Magic Strikes Kate just gets cooler and tougher and couldn’t stop taunting the Beast Lord to save her life. My kind of girl, is Kate.

Best Debut Performance by a Heroine in a Leading Role: Lyn for Girl in the Arena
She’s the daughter of seven gladiators. She loves her family and is true to herself, while refusing to perpetuate a suffocatingly rigid social system. I couldn’t tear my eyes away from Lyn.
Best Performance by a Hero in a Recurring Role: Curran for Magic Strikes
It’s just that he’s Curran. And he’s so furry and cocky and implacable. And out of his mind over Kate. Love the guy. Love, love, love him.
Best Debut Performance by a Hero in a Leading Role: Brigan for Fire
Because if you’re looking for still waters run deep, look no further. His iron self-control and constant putting of duty and family before any personal desires…well, in Kristin Cashore‘s capable hands, he’s utterly spellbinding.
Best Performance by an Antihero in a Leading Role: Nick for The Demon’s Lexicon
Talk about the definition of an antihero. Nicholas Ryves takes the cake, my friends. You love him, you hate him, you love to hate him. And his relationship with his big brother Alan will melt your heart. See if it doesn’t.
Best Performance by a Villain: President Snow for Catching Fire
The dude smells like blood and roses and I can’t read a scene he’s in without gagging. Seriously. What is wrong with him?
Best Performance by a Vampire in a Supporting Role: Stefan for Bone Crossed
Stefan is just, hands down, my favorite vampire around. He smells like popcorn and drives a VW bus painted like the Mystery Machine and he absolutely made Bone Crossed. I hope Mercy gives Marsilia what she deserves one of these days. For Stefan.
Best Series Finale: Diana Peterfreund for Tap & Gown
For never dropping the ball and coming through in every way that matters and more. Tap & Gown is the perfect ending to a ridiculously entertaining series. How many of those have you read?
Best Packaging: Arthur A. Levine Books for Marcelo in the Real World
I just love it. Better yet, its inside is every bit as breathtaking as its outside. And that is saying something.
Best Kiss: Lady Julia Grey and Mr. Nicholas Brisbane for Silent on the Moor
These two are three books in now and the tension…let’s just say it remains high. Part of it can be chalked up to how well-suited they are to one another and part of it is just that Ms. Raybourn can infuse a scene with Victorian heat like nobody’s business.
And last, but not least…
Best Author Pimping: My booktwin and dear friend Martha for her tireless and heartfelt pimping of Megan Whalen Turner‘s Queen’s Thief series: The Thief, The Queen of Attolia, and The King of Attolia
Thank you, Martha. What can I say? I should have listened to you earlier. I have seen the error of my ways and will never delay reading a book you rave about ever again. This series instantaneously skyrocketed to the top of my beloved bookshelf and Turner is an absolute storytelling master. Highly recommended for fans of Robin McKinley, Kristin Cashore, and Sherwood Smith.
As for my 2010 Must Be Mine list…I’m gonna leave you with my top 15 most anticipated titles. They hail from 3 new-to-me authors and 12 near-and-dear ones. The list is comprised of 8 YAs (4 fantasy, 2 urban fantasy, 1 dystopian, and 1 contemporary), 3 urban fantasies, 3 straight fantasies, 1 historical mystery, and is top to bottom made of awesome. Shiny, no? Here they are in order of publication date: 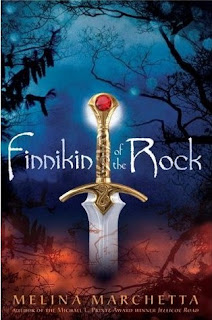 Finnikin of the Rock by Melina Marchetta
In a world of fever camps, wandering exiles, and cursed kingdoms, young Finnikin joins forces with the reckless Evanjalin in a bid to save the land of Lumatere from the evil that threatens to swallow it. After the wonder that was Jellicoe Road, I will read anything the woman writes. Due out February 9 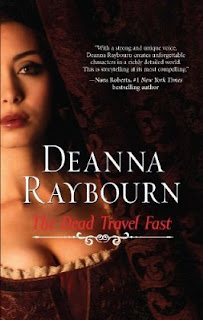 The Dead Travel Fast by Deanna Raybourn
A young woman leaves Scotland, bound for Roumania to visit a friend and write her book. There she encounters the mysterious Count Dragulescu and, well, really, need I say more? Due out March 1 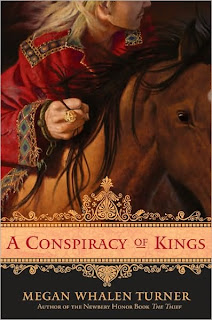 A Conspiracy of Kings by Megan Whalen Turner
The long-awaited fourth novel in the beloved Queen’s Thief series. This one follows Sophos as he fights his way to take his place as the heir to Sounis. Confession: I’m 100 pages into my ARC and it is, in a word, sublime. Due out March 23 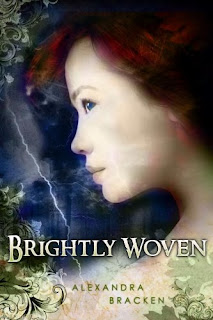 Brightly Woven by Alexandra Bracken
A land beset by storms and quakes, a mysterious wizard who brings rain, and a young woman stolen from her home who may hold the key to it all…I am so there. Due out March 23 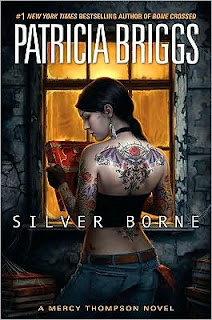 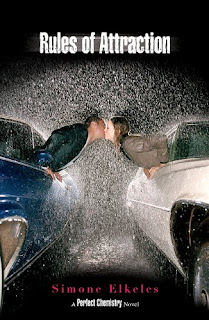 Rules of Attraction by Simone Elkeles
The unexpected but delightfully welcome sequel to Perfect Chemistry. This one follows Alex’s little brother Carlos. I enjoyed the hell out of the first book and can’t wait for the follow-up. Plus, that cover? Smokin! Due out April 13 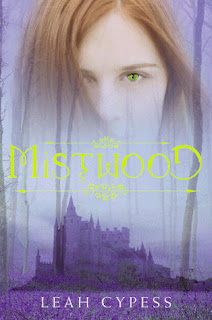 Mistwood by Leah Cypess
A young girl has lost her memory. A desperate prince risks everything on the mere hope she is who he believes her to be. Forced to return to a place she once fled, amid scheming and lies, Isabel struggles to determine who she used to be and what she must become. Due out April 17 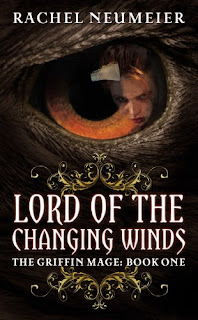 Lord of the Changing Winds by Rachel Neumeier
First in the Griffin Mage trilogy. The griffins are coming, bringing fire and desert in their wake. The king prepares for battle to protect his land. Meanwhile a young girl is summoned to heal the Griffin King and her awakening abilities lead her to the truth behind their sudden flight. Due out April 27 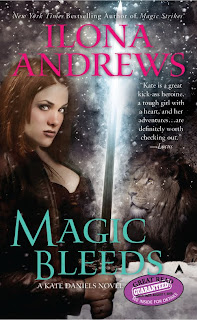 Magic Bleeds by Ilona Andrews
The fourth Kate Daniels book. Ilona and Gordon knocked it out of the park with Magic Strikes and I’m just not sure I’m gonna make it until May. Thank goodness for re-reading, right? Due out May 25 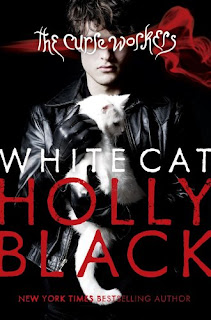 White Cat by Holly Black
The first in the Curse Workers trilogy, it’s about a boy named Cassel and takes place in a private boarding school, features a family of grifters, and is about curse magic. Oh, and a white cat. And is a fairy tale retelling. And it will be mine. Due out May 4
No covers quite yet on the rest of these, but keep your eye out because they are definitely not to be missed.
Heroes Return by Moira J. Moore
The fifth Heroes book featuring the lovable Source & Shield duo: Taro & Lee. Due out July 27
Bring on the Night by Jeri Smith-Ready
This series is #3 in my top favorite urban fantasies. I just love how smooth the writing is and finding out what happens to Ciara and Shane and the gang in the next WVMP Radio installment. Due out August 1
The untitled Hunger Games Book 3 by Suzanne Collins
I have no idea how it’s all going to play out but I can tell you one thing. Katniss better knock some heads together in this one because I am THIS CLOSE to losing it. Grrr. Due out August 24
Ascendant by Diana Peterfreund
The second Killer Unicorns book (I just love saying that) and the sequel to Rampant. Peterfreund is one of my very favorite authors and I, for one, am looking forward to more Astrid, more Giovanni, more Phil, and more Bucephalus! Due out September 21
Seer of Sevenwaters by Juliet Marillier
The sequel to the lovely Heir to Sevenwaters. This one is Sibeal’s book and one I’ve been waiting for for a long time. If you’ve never read any Marillier before, you have until December to pick up Daughter of the Forest and discover the splendiferousness for yourself. Janicu–I’m lookin’ at you. 😉 Due out December
That’s it for me. Thanks for having me, Smugglers! I’m off to track down some hot cider and wrap the last few presents. Thanks for stopping in this Christmas Eve and I hope your holidays are filled with good cheer and good books!
********************

Next on Smugglivus: Doug Knipe, aka SciFiGuy