in which we talk about all those water cooler moments of the past week’s episodes, raving about the good, ranting about the bad.

FINALLY, Betty is able to open that freaking drawer in Don’s study. This is something that has been building up for such a long time and I was glued to my screen as she went through her stuff. I had alternate feelings of exhilaration, anger (he keeps money hidden as well! The cretin! ) and pity when she realises the extent of what he keeps from her. But I ended up with ”frustrated” when she decided to keep silent about it. Here is hoping that it is a “for now” silence. On the other I think Don finally committed a HUGE mistake by starting an affair with someone so close to home , this will bite him in the ass (one hopes). That woman is seriously giving me Glenn Close circa Fatal Attraction vibes.

OH HOLY GUACAMOLE. This episode was awesome. So many quote-worthy moments. The thing with Dexter smashing the lamps and being caught by Rita went nowhere Rita brushing it off as work related stress. How lucky can Dexter be? Then, the kids and Rita go on holidays and Dexter is all cute-like and happy that he gets to be alone and play serial killer. The person he chooses to kill is a cop who killed her husband and child in cold blood to be free and obviously the irony of choosing this person to kill is not lost in anyone, not even Dexter. BUT that leads to the epiphany that he has in the end (OMG WERE THERE TEARS IN HIS EYES?)that he would rather face being caught than to lose his family which was so totally amazing. ONLY this show is capable to make me cry in sympathy for a man AS HE KILLS SOMEONE. That is totally bonkers.

But oh my god, the ending was mind-blowing. I totally knew that we were headed to Lundy’s death as soon as he ran into the Trinity Killer (who gets creepier with each episode) and then left a message at Dexter’s machine (henceforth knows as The Clue to solve his own murder) but I did not expect Deb to be caught in the fire as well! Will she survive? I hope so. And Batista and Laguerta are too cute for words.

I LOVED this episode. The Murder of the week was a cool whodunit but once again it is the dynamics between Castle and Becket that made the episode. So.Many.Times they were THIS close from touching or saying something meaningful. I ended up growling in frustration more times than I can count! I am sure this relationship will build up to an impossible amount of pent-up sexual tension and then it will blow us away. Then again, maybe not (remember Moonlighting?). Anyways, this was a pretty cool episode, fun and entertaining. I LOVE LOVE the end of the episode. It left me with a huge smile in my face.

When House started to hear voices, I swear I felt my heart break into a million pieces. I was VERY worried for a moment there. Until we learnt that it was actually Wilson talking to the dead girlfriend that he was hearing and then my heart broke all over again. AW, WILSON!
I am also loving to see Chase suffering the consequences of his act. The scene with the priest was very poignant. Can’t wait to see how they play this throughout the series. The medical case of the week was an interesting one too.

A great episode this week, very suspenseful. And me thinks I have another couple to ship – that will be Cal and Foster by way. She was so distraught by the whole hostage situation and the way Cal went to her for comfort in the end was awesome.

Ok, I am totally digging this show. I thought this episode was funny and cute with the daughter trying to assert herself (I actually kinda of cheered her in the end) and the younger kid being all kinds of adorable with his totally creepy girlfriend.

Hummm I liked this episode but I thought it was all over the place with far too many storylines at the same time. The Noah-Rachel relationship and the Good!Sue! were wonderful arcs that could SO have lasted more than one episode. I mean, I even have a crush now on Noah and how cool would be to be rooting for Evil!Sue! to return? I sort of fear that this show is going to be cancelled and the writers are throwing all the punches now.

And I dislike a lot what Emma is doing to her fiancée.

HOLY CRAP! Lundy’s soooooo dead! Deb, on the other hand, cannot be. Nope. Simply cannot be. I refuse to believe it. Nope. *sits in denial tent with Ana* The boyfriend has a theory that it was Anton who shot them. I tend to think it’s Trinity.

Also, really liked Zoe in this episode. I laughed out loud at the “WHY does everything have to be about rape with you?!” part. Morbid humor. I fully agree with Ana, the briliance of this show is just…unparalleled. I am rooting so much for Dex, it’s ridiculous. And I have “awww” moments WHILE HE IS IN THE PROCESS OF DISMEMBERING A VICTIM. This is bizarre. But…I like it.

I like that Chase has some serious guilt issues now after killing Mufasa. It’s believable, I like the continuity…but I’m scared. I saw on the cover of TV Guide whilst standing in line at the supermarket that OMG SPOILER CAMERON IS LEAVING THE SHOW?!?!?!?!?! Shit. My imagination immediately jumps to Chase telling Cameron what he did, and since Cameron is so moral and CAMERON-Y, she will never be able to live with him and they get divorced, sad bananas abound!

Ahem. But on this week’s episode, I really like the touching moments between House and Wilson. Awww, Wilson.

OH and loved the “that’s FOREPLAY” line when Cuddy and House are doing their fighting thing. Rrraowr. Of COURSE it’s foreplay.

This show is really surprisingly funny. Loved the whole “coal digger” thing. The chick from Happy Gilmore is totally jealous of Gloria. And the gay guy is an ex-offensive lineman from Illinois?! That was awesome.

Ok, I have a huge crush on Puck and Rachel. Were they NOT adorable together!??!! I have to agree with Ana though – it really sucks that all these plot threads (Puck & Rachel, Will & Emma, Sue’s love life) all started and resolved in a single episode. I would’ve milked it a bit more.

Lots of Will dancing and singing in this one. The guy is pretty amazing. But…yeah, even though he’s a huge jerk, I have a crush on Noah (despite his stupid hair). He’s a hottie. And I liked his “Sweet Caroline.” And I think he and Rachel have good chemistry. DAMMIT why do I always pick the losing ‘ships?

Jim and Pam are baaaaaack! And Michael is sleeping with Pam’s mom. Oh. Dear. Lord. I don’t think Pam was overreacting. Though I did feel bad for Michael because he genuinely seems to like Pam’s mom. He’s all sensitive and…Michael about it.

My favorite moment of the episode? When Toby walks in on Michael and Jim having a talk and JIM goes “DAMMIT NOT NOW, TOBY!” Hahahahahahahahahahahaha! Poor Toby. And then later when Michael pretends to be his friend…oh man. Poor Toby.

Oh dear lord that mascot was terrifying. (It’s supposed to be gender and race neutral) 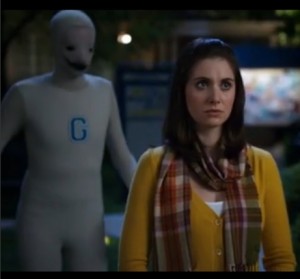 Other than that, not the funniest episode. Blah. The boyfriend really likes the show, so I’ll keep watching, but it’s kinda meh all around for me.

Other than the fact that I have nothing but seething hate for the Phillies right now (though the Angels’ win last night totally makes me feel better about baseball!!!), this was another solid episode. I loved Mac’s letter to Chase Utley! LOLOLOLOLOLOLOL:

Dee: Did you write a love letter to Chase Utley? Is that …?
Mac: In a lot of ways, yes I do love him, but that is not a love letter in the way that you are thinking of it. Ok? I mean, there’s nothing sexual —
Dee: Ok. That sounds good. Great. I’m gonna read it.
Mac: Yeah read it!
Dee: ‘Dear Chase’ Oh SHIT there are stickers. My God. Oh this is good —
Mac: Yeah, you gotta jazz it up, you know, you gotta make it pop —
Dee: Oh you sure do. ‘Dear Chase, I feel like I can call you Chase because you and me are so much alike.’ Really. ‘I would love to meet you someday. It would be great to have a catch. I know I can’t throw as fast as you, but I think you would be impressed with my speed. I love your hair. You run fast. Did you have a good relationship with your father? Me neither. These are all things we can talk about and more. I know you have not been getting my letters because you would write back if you did and I hope you write back this time and we get to be good friends. I am sure our relationship would be a real home run.’

[cut to courtroom where everyone is laughing]

HAHAHAHAHAHAHA. Oh man. What a creeper. I love that the bailiff is cracking up too.

In Mac’s defense, Chase Utley is pretty cute. But I wouldn’t hesitate to take out a knee if I saw him in real life. (Goddamn Phillies ALWAYS in the way of my Dodgers…)

And that’s it from us! What about your fave tv moments?

Lost Finale Recap- AKA WTF was that?!