in which we talk about all those water cooler moments of the past week’s episodes, raving about the good, ranting about the bad.

For the Week of November 1 to November 6

The last two episodes were everything I have been hoping for with regards to Don facing both his past and his present mistakes. Betty finally confronts him about what she found and he breaks down and tells her everything. It was a very good scene where I realised, not for the first time how good an actor he is. I was kinda sad for him at the same time that I was totally and completely HAPPY that he was getting what he deserves and that came in this week’s episode – when Betty tells him that she does not love him anymore. Awesome.

When this season first started and I learnt it was 1963, I knew that the JFK’s assassination would have to come into play at some point, and I was not disappointed. It was well expected to see how it touched all the characters and there was one scene in particular that left me really surprised only because I was not aware of the fact that Lee Oswald was shot , live on TV! Betty screaming at the TV was…whoa, man.

Next week, is the final episode of the season and I really want to see how all storylines will come together. Here is hoping that part of the team will leave Sterling Cooper for their own agency – that would be all kinds of awesome.

Oh my word! Hhow freaky and yet totally cool is John Lithgow playing serial killer Trinity? One moment I think he is totally scary , the next he is as cuddly as a teddy bear. The moment that Dexter and us , viewers realise that Trinity leads a regular life with family, kids and he is a deacon at church was quite possibly one of the most memorable scenes in Dexter, ever. Then, of course, there is the hope that Dex feels that he too, can have it all, which is the theme of this season. And this is proven by how over and over again he gets away with things. Rita on the other hand is annoying me so.freaking.much.

But seriously, how awesome is Deb this season? I don’t think I ever liked her this much. The scene at the parking lot where she breaks down after Lundy’s murder was so raw and so sad. I honestly cried a lot in that scene. I am also really, really enjoying how Quinn is helping her and I yes, I am rooting for a future hook-up. What can I say? It is the shipper in me!

One word for you: Browncoat. The Halloween episode was all kinds of cool with Nathan Fillion donning his Firefly costume again and I was totally geeking out at it. Other than that, the show is so very pleasant – yes each week’s case is your usual police procedural but they manage to make it interesting; and of course the
chemistry between Castle and Becket is another one that pleases the shipper in me!

DUDES! THE PILOT WAS AWESOME! I loved every second of it, the acting, the special effects, the tension, the divided loyalties. I even liked Scott Wolf! V has so much potential. I won’t say anything else as we plan to write a post about it after the second episode (just in case this one was a fluke) because that’s how much we both loved it. After FlashforwardFail, this has restored my faith in this new season!

Thea’s Favorites – I’ve got two weeks to catch up on, so here goes…

Deb’s heartbreaking loss and her scene was just…wow. I agree with Ana – Jennifer Carpenter is really awesome this season, and I think she deserves an award nod. That parking lot scene…just WOW. That said, I’m fed up with Quinn and I love how his journalist girlfriend is TOPLESS IN EVERY SCENE. How do you cast that? “Looking for hot chick who will be topless in every scene – prudes need not apply!” Heh. To be fair, she has some nice knockers.

John Lithgow and the revelation that he’s JUST.LIKE.DEXTER is awesome. He’s terrifying, and I’m enjoying learning more about what makes Trinity tick – why he kills. The scene with his wife in the bathtub….eeeeew! Creepy! I like that Dexter is trying to pick up tips from him, as wrong as it is. And is it wrong that I hate Darla – I mean Rita – so much? She’s getting annoying…but then I stop and think about it, and she’s just (finally) picking up on the fact that Dexter is not the standup guy he pretends to be. I wonder if she’ll ever learn about Dex’s “Dark Passenger”? Will she accept him? Interesting…

Holy smokes, I LOVED THIS PILOT! It had everything I could have wanted – great acting, solid plot setup, awesome special effects, promise for a season full of goodness. Why didn’t ABC pick this as their “LOST replacement” show? It’s certainly lightyears better than that gawdawful mess that is Flashforward! Also I should note that I haven’t seen the ’80s show, so I have no frame of reference for the pilot. But what I’ve seen, I’ve really, really liked. A list of the coolness that is the new V: 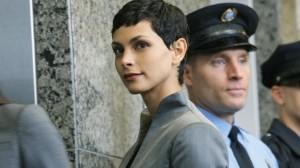 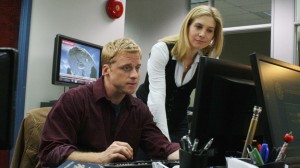 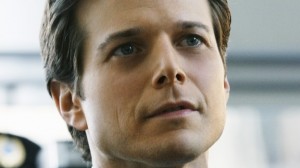 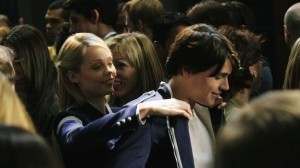 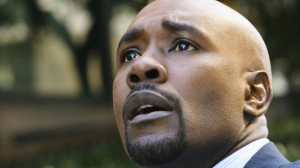 This is probably the funniest show to premiere this season. I LOVED the race between the Happy Gilmore chick and Steve from Dawn of the Dead last week, and this week’s fencing match was hilarious. Manny really tore that little asian girl apart *facepalm*

The Halloween episode was HILARIOUS. I think it’s the first time I’ve really laughed my ass off while watching this show! Pierce’s tripping out, his desk fort…and Abed’s ridiculously spot on Bale-Batman voice. I loved it. LOVED IT. This week’s episode isn’t nearly as winning, but still fun.

The music video rules (as does the Subtle Sexuality website). I love Erin sooooo much. Also, this week’s episode with Michael dumping Pam’s mom on her b-day, and then Pam’s slap….just, wow. Awesome.

KITTEN MITTENS! FINALLY! I have been laughing my ass off at these Charlie promos since they first aired, and finally, the Kitten Mittens episode is in the flesh. I mean, just look:

And I love any time that Charlie gets to use his Lawyerman Persona. He says the most random, ridiculous shit, and it’s amazing.

Also, last week’s episode with “Desert Rose,” the poking fun at Mickey Rourke’s The Wrestler, and OF COURSE, The Birds of War song…I have no words. Just watch.

AND that’s it from us this week! What have you been watching?