You may have noticed by now how much we love books and reading. What you probably don’t know is that we love TV shows about just as much. We are both huge couch potatoes and each of us follow quite a few shows each. So, we thought why not a new feature, in which we talk about all those water cooler moments of the past week’s episodes, raving about the good, ranting about the bad?

Thus On The Boob Tube With The Book Smugglers was born:

This Saturday, and every Saturday for the duration of the TV season, we bring you a brand spankin’ new feature:

(don’t we love the banner that Kmont created for us? Yes, do. Yes.We.Do)

Entourage: Lloyd’s Speech to Drama
Entourage is a show completely devoid of depth or emotional intelligence, and the way women are portrayed on the show is ridiculous (case in point: Ashley. OF COURSE the way out of that relationship is to make her CRAZY! God forbid she actually just doesn’t want to be with Eric), but it’s fun too. Lloyd’s speech to keep Drama, because he believes in you Johnny Drama!, was awesome.

House: Superman, Infidelity, the RAP
House‘s two hour season premiere was freaking awesome. It was different than anything we’ve seen on the show before, and I love that there are consequences for House, and that he’s completely clean. His “mentorship” to his talkative and idolizing roommate, when he takes “Superman” out to get him happy, the whole hot german lady thing, the cool friendship between House and his doctor (and the others in the asylum) and of course, the talent show rap…it was all awesome. House is changed. And I think it’s a very good – much NEEDED! – thing. I actually stopped watching House consistently because the repetitiveness was getting boring…but the looney bin brought me back, and I’m stoked to see what happens this season. (And if the promos are any accurate measure, it looks like we’re in for some ch-ch-ch-changes)

Castle: The Apology
I love Castle. Yeah, it’s cheesy and completely unrealistic – but that’s all part of its charm. And Nathan Fillion is at his charming, hilarious best in the season opener. I loved the poker game, Beckitt’s horrible Russian accent, and ultimately, Castle’s Apology. Because girls sometimes just want to hear you cut the bullshit and just say SORRY. I love the duo of Castle and Beckitt. LOVE.

Modern Family: Hey, they’re one big family!
So far, Modern Family seems like it will be a fun, funny show. I liked how it all came together in the end, with this big, strange, and well…modern, family. Al Bundy for the win!

Glee: Tina, Less Rachel, Football, and DRAMA
Glee is my favorite new show right now (not really much of a contest there), and this week’s episode was surprisingly touching and dramatic. I’m really over the Ring on It song (why is this song having a resurgence all of a sudden??? Please don’t say because of Kanye. Please.), but I loved Kurt in this episode, coming up big for the football team, the dancing on the line of scrimmage, the admission that Kurt is gay to his father. And holy crap, how much do you hate the cheerleader bitch and Will’s wife? GAAH! Also, liked Will standing up for Tina and giving her the West Side Story solo over Rachel. I love Rachel’s character, but others need a chance to shine too, right? 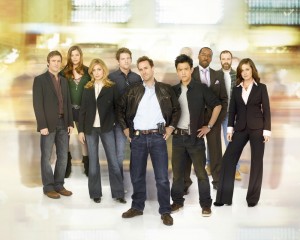 The pilot for FlashForward was basically what the promos have advertised. The CG was pretty bad, I thought!? Am I alone in this? The burning buildings of downtown LA looked pretty low quality, but maybe that’s just me being a snob. Joseph Fiennes, aka Ralph’s bro and the dude who played Shakespeare in Shakespeare in Love, does a pretty good American accent, though he’s really hamming it up in the episode. Meh. Like Penny from LOST as his wife (when she was having her FF and said she was with another man whom she’d never seen before, I was SOOOOO hoping it would be Desmond saying to her “I told you I’d find you, Penny!” LOLOLOLOL no? Ok. I’m a dork). My concern for the show is, what exactly is its endgame?? This is based on a book, and once the characters all figure out what exactly happened…then what? It’s like Twin Peaks – once you know who killed Laura Palmer, it’s all over. We’ll see.

The Office: DWIGHT
Ohmygod this episode was HILARIOUS! The cheese platter, Toby and Dwight teaming up to investigate Darryl’s worker’s comp. claim, Darryl’s SISTER!, Michael betraying Jim but then getting his back…and best of all, DWIGHT’S FACE AT THE END!!!!!! AHAHAHAHAHAHAHAHA! This show is so. freaking. brilliant.

Community: Senor Chang & Mr. Chase
I can’t help but feel like Joel McHale is a giant douchebag in real life. Maybe that’s not fair, but he gives off a totally douchey vibe, reinforced by his character in Community. But hey, I genuinely loved it when he got up to present that ‘vaguely homophobic, anti-Israel’ spanish presentation with Chevy Chase. And Senor Chang, el chino tigre! Even though his speech is one we’ve seen on countless promos, he cracks me the eff up. Awesome.

It’s Always Sunny In Philadelphia: Road Trip!
BWAHAHAHAHAHAHAHAHA! This episode more than makes up for the slightly disappointing season opener. HILARIOUS. The Italian Market with “Gypsies” all over the place, Charlie never having eaten a pear and then eating the whole thing (stem, stickers included), Sweet Dee getting wasted and staring, singing to the poor hitchhiker, telling him the gay porn he’s gonna have to do to make it in Hollywood with his sweet young body (LOLOLOLOLOLOLOL)…oh my god it’s beautiful. The gang of COURSE makes it back right to where they started, and what better way to start out the day than with a few more beers? I love this show so much.

This show drives me mental but this last episode was not so out there. Or maybe I am finally getting used to it. Then again, maybe not because I felt positively murderous towards Joan’s scumbag of a husband. She is awesome but it is so sad that she is saddled up with that one. I loved Don’s meeting with Conrad Hilton as he had another chance to show off his mad marketing skills. But not as much as I loved how Don stepped up to take care of his daughter’s fears – he is starting to become a real father, perhaps (because honestly how much does Betty suck as a mother?) . Best moment of the episode though goes to that scene where the British guy from the main office gets his foot chopped off and blood splutters all over the place. That was so awesome.

I love this show: as Thea says it is completely cheesy and unrealistic but it is impossible not to love it. I adore Castle but really this episode was all about Beckitt – her inability to deal with the way Castle dealt with her secret; the Russian accent and finally the amazing final scene where she lays bare her soul. And then he comes back just to say “I am sorry”. I had a huge smile on face after that. I am SO on board of this ship.

House keeps surprising me. Every time I think I am done with the show, they pull me right back in by subverting their very formula and it works every single time. After an spectacular season finale I was a bit worried that they would drop the ball, but honestly within the first 3 minutes of this episode I was hailing Hugh Laurie as a God of Acting once again. I started to cry and cried many times before the episode was over. I did think some things over the top and perhaps maybe too easy but ultimately it was all worth so that I could hear House saying : “I need help”. Now he is clean, I want to see how he deals with life. I hope he continues with therapy though, I loved his interactions with his doctor. 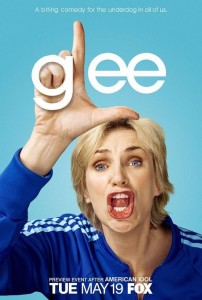 When I started watching Glee I thought it was going to be all fruity loopsy with all the dancing and singing. But soon it was clear that some Major Drama would be part of it too. From Will’s marital problems to each of the kid’s issues. This episode sees Finn finding out that his girlfriend is pregnant and Kurt coming out to his father and the repercussions of those made for some great tv. I freaking hate the Cheerleader Girlfriend and Will’s wife. Really. They simply can not get away with what they are planning. Now, my favorite character has to be Coach Sue , OMG how wrong is that woman? I love her TV spot though, I was laughing so hard.

Ok, so does anyone else finds it completely stupid and moronic that San and Dean decided to take some time off each other right now, you know with the perky business of IMPENDING APOCALYPSE and all that jazz? I am not really a fan of this whole story arc anyway (I much preffered the Monster of the Week style episodes) but this is just plain silly. Sam is doing my head in with all his woe- is-me persona. I know, I know what else is new right? But hey, at least the Dean and Castiel dynamics worked and my heart did a little bit of breaking when Dean said that he was happy without Sam. And then Lucifer shows up and tells Sam that he is his true vessel and I was all like Oh noes. Really? Whyyyyyyyyyy?

Favourite Dean-One-Liner: “You were wasted by a Teenage Mutant Ninja Angel?” (because Cas was killed by the archangel Raphael).

The Office – the entire episode

From the opening with Michael asking Oscar if he needed to have a safe word for his colonoscopy, to Dwight and Toby’s antics, to Jim’s heartbreaking moment with Michael (aww he didn’t want to lose the Jim, Pam and the baby) to the ending with Dwight going mental over Jim’s promotion. This was another winner. I have much fun with The Office.

Meh. I am not sure I want to keep watching this to be honest. I think this show TRIES to be quirky and “wrong” like the Office but hummm..it is not really succeeding so far. I do like the Indian guy though the Chinese teacher who teaches Spanish was hilarious. But yeah, I think I will watch another week , then make my mind up.

And that is all from us this week. What about you? Any favorite TV moments you wanna share?

Guardians of the Galaxy & X-Men: The Black Vortex Trailer