I was looking through my horror dvds the other day, and came to a “d’oh” realization – I have a LOT of John Carpenter. I’m talking, nearly a shelf solely devoted to his films. And there’s a perfectly good reason for that:

I love his camera work, his special effects, his at times cheeseball scripts. I love his catchy, repetitive, heavily synthesized musical scores.

Today, I share with you my love of John Carpenter, with my favorite movies and moments. 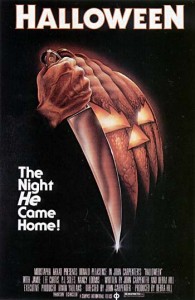 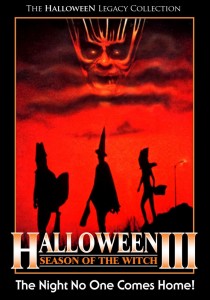 I posted a bit on Michael Myers last year in my Slashers post, and I don’t think I need to say much about this classic gem. Halloween, the low budget and yet shockingly effective film that started them all is iconic. I love the opening of this film, as the camera shows a first person perspective of a murder…only to reveal the man behind the mask is an innocent, angelic looking boy named Michael. And a monster is born:

Less appreciated, however, is Halloween III: Season of the Witch. Despite its title and its place as the third “Halloween” film, it is not about Michael Myers at all. Instead, Halloween III follows The Silver Shamrock company’s maniacal plan to liquify human brains by turning them into bugs by virtue of their very popular halloween masks and a really creepy commercial. This film gets a lot of crap, but I’m not sure why. You’ve got a druid stone, centipede-brains, androids, a catchy theme song…what’s not to love? This remains one of my favorite Carpenter films. 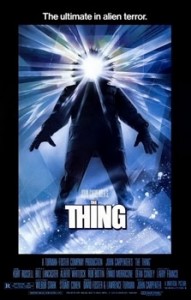 Carpenter’s remake of the 1951 original, his version of The Thing is – I’m going to go out and say it – one of if not the finest Science Fiction Horror films EVER. Period. This marks another collaboration between Kurt Russell and John Carpenter (an awesome director-actor team if I’ve ever seen one), and he does a brilliant job as R.J. MacReady. Just look at that sweet beard and mane of hair. Seriously, this story about trapped scientists in Antarctica, terrorized by a shapechanging alien is classic. John Carpenter’s sticky, slithery version of special effects rule. Not to mention, the score for the film was composed by the one and only Ennio Morricone. And here’s one of my favorite scenes. 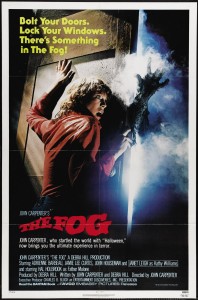 The original, before that teen movie remake crap came out a few years ago. The Fog is, well, about fog. Not just any fog though – it’s a strange mist that brings with it a legion of zombie-like murderous monsters in its wake. It’s a ghostly revenge story, and best of all, it’s a true Sailor’s Story. We don’t have enough of those these days. 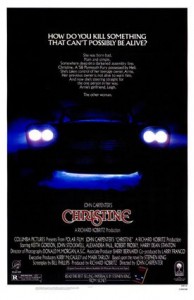 Be still, my heart! John Carpenter takes on Stephen King with Christine, the story about a jealous, possessive car that claims a stake on her owner, Arnie. Sweet car, sweet soundtrack – it’s the perfect obsessive love story gone awry. Just check out what happens to poor Moochie. 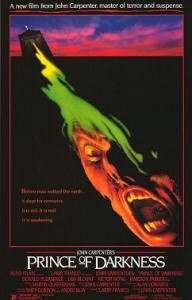 Probably the flat-out weirdest of Carpenter’s movies, I actually really love this surreal, sci-fi infused horror story about the coming apocalypse. There’s talk of tachyons and particle physics, as well as the antichrist, creepy zombie/possessed people, Alice Cooper as a homeless dude, and a green canister that makes you think of Teenage Mutant Ninja Turtles II: The Secret of the Ooze (or maybe that’s just me). Plus, Victor Wong is in it. TALKING PHYSICS. Win. 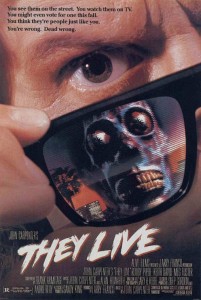 So the premise sounds pretty strange – a dude finds some sunglasses, and through them he can see that aliens have taken over the planet and forced us to submit to them (as they herd us sheep). And we humans are completely unconscious to this fact. This is a highly underrated cult classic film – satirical and horrific. 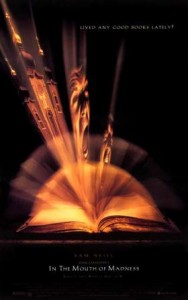 This film rounds out Carpenter’s “Apocalypse” series (along with Prince of Darkness and The Thing). In the Mouth of Madness stars Sam Neill as a private investigator who is contracted by a publisher to find the whereabouts of popular horror novelist Sutter Cane. As he goes to Cane’s hometown to find the author, he stumbles instead into a nightmare of Cane’s creation. Cane needs Trent (Neill’s character) for a job – to bring his final manuscript to the world…thereby unleashing the monstrosities of another dimension on the planet. You know, Lovecraft style.

(I used to think Harry Potter would have the same effect on the planet, and I resisted reading the books for a while when I was younger. I have no idea, I’m weird. And yes, I’ve since read and loved Harry Potter, and I have yet to bleed from the eyes or drive an axe into anyone’s head) 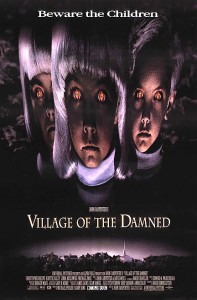 Another remake by Carpenter, and this one stars the late Christopher Reeve. One day, everyone in a small town passes out – and women all over the town wake up…pregnant. They give birth to strange babies with white hair and glowing eyes, who grow up able to read minds and make people do terrible things. Devil children, in other words. In penny loafers.

And that’s my list of Carpenter horror faves! Of course, there’s also Escape from New York (1981) and Big Trouble in Little China (1986) that have made it on my dvd shelf too – but those don’t really fit in Halloween Week.

Harry Potter and The Book Smugglers