Today, for our last guest of the season, we have the incomparable Katie(babs) of Babbling About Books, And More!. Katie has decided to write a little bit about some of the scariest places to visit, in Travel Channel fashion!

Without further ado, we give you the lovely KB!

When the Spooky Book Smugglers asked for me to join in on their scary Halloween Week, I was stumped on what to post about. In the past I have talked about my favorite scary books and movies, so thinking of something totally different to post was difficult. (even though I had about a month to think about it *blush*).

Along my blog and website hopping across the internet I found myself at Travelchannel.com and their post on the Top 10 Creepiest Places. This list is the most frightening places in the world:

Out of the 10 here, I have visited 4 of these places. I guess you can assume I haven’t been to the Bermuda Triangle because I would probably be stuck on some alternative island universe ala the show Lost. (Not that I wouldn’t mind being a beach bump with either Matthew Fox or Josh Holloway.) 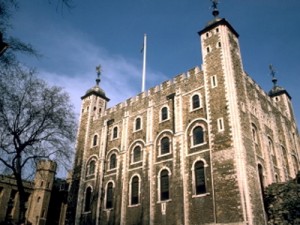 The Tower of London is filled with so much history, over one-thousand year’s worth! Unfortunately I didn’t see any ghosts walking around with their heads in their hands. Salem is a bit cheesy and corny but still a fun time and Gettysburg, PA is very tragic and spooky because as you look down on the battlefield where the North and South fought the most deadly battle of the Civil War, chills wrack your whole body because the ghost of that battle and the dead, their residual energy still remains. There is also this wonderful Wine Festival in September there that I also recommend you go to if you have the chance.

But the one place I wanted to specifically point out is number 2 on this list. The Winchester Mystery House in San Jose, CA is an amazing structure that may or may not be haunted! 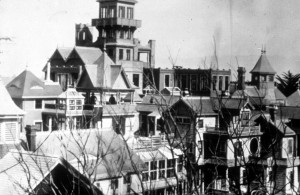 Why is the Winchester House such a creepy place? The house is full of rooms with stairs and doors to nowhere! You open a door and there is a wall. Stairs lead up toward the ceiling. It is a winding labyrinth with rooms that make no sense.

I even walked up one set of stairs and bumped my head on the low ceiling. O.o

The story behind the Winchester House is pretty sad. The reason the house was built this way is because:

“When rifle heiress Sarah Winchester began building her Victorian-style mansion in 1884, she pledged that the construction would never end during her lifetime. The reason? She thought the continuous noise would appease the ghosts that plagued her after the deaths of her husband and daughter as well as help her attain eternal life.”

“Sarah Winchester built a home that is an architectural marvel. Unlike most homes of its era, this 160-room Victorian mansion had modern heating and sewer systems, gas lights that operated by pressing a button, three working elevators, and 47 fireplaces.”

The Winchester House is not a house of horror but a wonderful and marvelous mansion full of bizarre features and oddities. The rumors still persist that the victims killed by Winchester rifles haunt the house that was never finished, roaming the halls, confused because of the stairs and doors that lead to nowhere.

Out of the 10 creepy places mentioned, which ones have you been to? How about some places that aren’t mention that you may have visited that should be placed on this list? And if you have been in the Bermuda Triangle and lived to tell about it, do they have a island happy hour there?