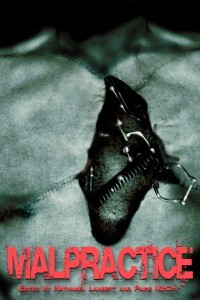 How did I get this book: Review Copy from Publisher

Why did I read this book: Necrotic Tissue is a quarterly magazine dedicated to horror writers, and Malpractice is their first anthology. When the publisher wrote to us with a review query for this anthology, we were more than happy to accept. We try to do our part to support smaller press efforts, especially in the realm of horror – not to mention Malpractice sounded like good, old fashioned, horrific fun. What better setting for tales of terror than a hospital?

Summary: (from NecroticTissue.com)
Regimens. Routine. A simple checkup. Measure your cholesterol and reflex response, and then you’ll be on your way; clean bill of health. But routines have a tendency to take detours. Tests come back abnormal; too many red numbers and falling graphs place you on an unpaved road, travelling a course that’s the furthest thing from routine.

All you can do is clench the steering wheel and close your eyes.

Malpractice is a collection of 18 short stories and 13 “100-word Bites” – that is, flash fiction – from assorted authors, all united by a single commonality: they are all set in the evilest hospital in existence, Bloom Memorial. These horrific stories and bites range from psychological to supernatural terror, from crazed nurses, demonic doctors, malignantly hungry tumors to dystopian futures – and everything in between. (Yes, you just read that sentence correctly)

Besides all these stories being inextricably tied to Bloom Memorial, they also share one other similarity:

All of these stories are pretty damn good.

As with any anthology, certain entries are bound to be better than others. Amongst the winners, there are an inevitable few that missed the mark, or did not manage to satisfy. In the case of Malpractice, though, these low notes are few and far between, and I found myself impressed with the overall quality of each entry. Not only were these stories almost uniformly well-written and effectively horrific, but the variation between each piece is remarkable. Certain duds committed the usual new-horror-author-blunders, the most egregious and painfully annoying of which is a tendency to use a thesaurus for adjectives (e.g. “Mid-day sunlight dappled through the deciduous canopy above,” emphasis added), followed closely by the tendency to write overly-ornate, awkwardly phrased descriptions (of often pedestrian, predictable images) as a substitute for novelty or atmospheric terror (e.g. “Their skin was a livid purple, crawling with legions and busily squirming bugs. Their bald scalps shone like beacons above their bloated faces, in which the only truly distinguishable features were their teeth and eyes. Their teeth, long tusk-like protuberances, erupted out of the middle of their faces and jutted obscenely into the room. The eyes, murky green slits, fixed on Carol with malevolence that was genuinely childish in its obviousness.”). And yet, even these duds often had some salvageable merit in their ideas, if somewhat lacking in execution.

More important than these low notes are the overwhelming high ones in Malpractice. My personal favorite stories were “A Kind of Living” by Paul Harris, “Post-Procedural Care on the Bloom Memorial Line” by Jeremy Kelley, “Universal Donor” by Bryce Albertson, “7734” by Douglas R. Burchill, and “Snip” by Jennifer Greylyn. In “A Kind of Living,” Mr. Harris examines a world where every social and economic problem of humanity has been solved – hunger, money woes, even sickness have been eradicated – but at what cost? “Post-Procedural Care on the Bloom Memorial Line” takes the story outside of Bloom Memorial’s dark halls and on a hiking trail, where two unsuspecting nature adventurers find themselves in the wrong place at the wrong time, on the hospital’s private train tracks. In Mr. Albertson’s “Universal Donor,” a nurse with a personal axe to grind takes it out on a convicted killer under her care. “7734” is a more traditional supernatural horror novel, with a distinct, Boschian style of surrealism – roommates in Bloom find themselves with certain…enhancements. Which they use to attempt to escape from the hospital’s ever-growing walls. In “Snip,” one of the most original and cleverly written stories of the bunch, a man is admitted to the emergency room with a unique story he cannot open his mouth to tell. Weaving Greek mythology into the medical horror setting, Ms. Greylyn’s story is neck and neck with “7734” for my favorite of the whole bunch. There are some wonderful gems in Malpractice, and these are just a few of the standouts.

I should also mention that I’m not a huge fan of flash fiction, but the “Bites” in this novel did a pretty convincing job of getting me to drop my bias against this form of abbreviated storytelling. It’s a very, very hard thing to engage a reader in 100 words, and each of the 13 Bites did a damn good job. In particular, I loved the black humor of “Malignant” by Daniel R. Robichard and “Gravity Feed” by Lee Pederson, as well as the creepiness of “Patient Care” by none other than Stoker Nominated Joel A. Sutherland, a Book Smuggler favorite author.

Additional Thoughts: Hospitals and horror – it’s not such an unlikely combination. Fans of this particular medical blend might also appreciate checking out the following – and fans of the following might want to check out this anthology. 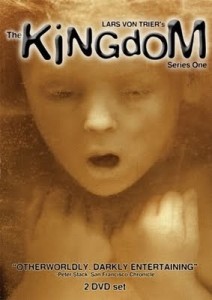 The Kingdom, is a Danish television mini-series. Set in the neurosurgical ward of Copenhagen’s Rigshospitalet – the country’s major hospital, built upon “bleaching ponds” – The Kingdom follows a large cast of characters in the hospital as strange, supernatural events occur. It’s a bizarre, trippy show, but definitely worth a rental. 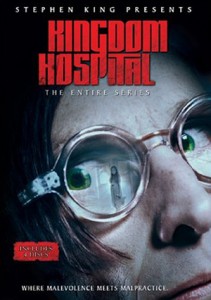 Then, there’s Kingdom Hospital from Stephen King. Based on The Kingdom, Stephen King wrote this miniseries about a hospital built on an old civil war mill, where – you guessed it – strange, supernatural phenomena occur. The series started out strong but kinda floundered in the later episodes, but still worth checking out for King fans. It’s especially worth checking out if you’re a Dark Tower fan, like myself – those easter eggs (Nozz-a-la, Candleton – of Charlie the Choo-Choo/Blaine the Mono infamy) are irresistible. Plus, if nothing else, the intro sequence is pretty cool.

Also, if you’re a LOST geek like myself, you’ll be tickled to know that Evangeline Lily (aka Kate, aka she who used to be cool but now has been relegated to crying uselessness) is in an episode as the chick sleeping in bed, before Benson offs himself.

Verdict: Malpractice is a rare anthology with impressive scope in its range of material; even more impressive, though, is the uniformly high quality of each of its stories. Absolutely recommended.

Powerpuff Girls Review: Talk Me Down by Victoria Dahl