Disclaimer: Halloween is totally a Thea thing when she hijacks the blog and makes me watch and read all sorts of stuff that are way outside my comfort zone (I am SO NOT a horror/Halloween fan). Last year, it was The Evil Dead movies, which, wouldn’t you know, I ended up loving. This year, I was given another list of movies that I had to watch, one for ach day of the week. Ana’s Halloween Marathon is now an official part of our annual Halloween celebration. Let the fun begins! Also: there will be spoilers! 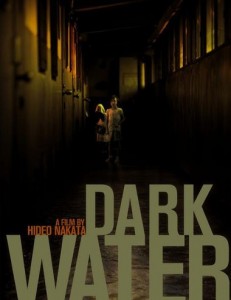 Why Why Dark Water : Today our International Horror day in our Halloween Week celebration and Dark Water is one of Thea’s favourite movies. She asked me to watch it for Halloween and she even sent me the DVD by post!

Trivia: Dark Water is by the same director that did The Ring (the original Japanese one) and both movies were based on stories by novelist Koji Suzukiwants. Now, don’t ask me why, but I actually watched The Ring a few years ago out my own accord and it remains one of the scariest experiences of my life.

I started watching this fully expecting to shit my pants, pardon my French. The Ring was such a scary, downright terrifying experience for me, that I was sort of expecting Dark Water to go down the same way especially when I learnt it was a Ghost story ( I hate, hate, hate, HATE ghosts. Hate.) . I was so, so wrong. I mean, it was still pretty scary and I basically watched the whole thing with my eyes covered, peeking through my fingers but in the end, the movie was more like a beautiful tale in a horrific sort of way. And it reminded me quite a lot of The Orphanage, which nearly caused me several heart attacks (the peek a boo scene in the library? I had a hysterical attack watching it, I was so afraid) but also gave me the warm fuzzies. I will not go as far as to say the same about Dark Water but there is an undeniable sad beauty in the midst of all the horror.

And as much as I would like to share my viewing experience with you (which would go something like this: OMG, AAAAA and Yikes!) as I went along, I think I would be short-changing the movie for those who have not watched it. I will just write some of my thoughts about it:

Dark Water moves really slowly and sometimes I think this is the worst thing about some horror movies, the certainty that SOMETHING is coming and you just don’t know when; and as the time passes and the clock starts to tick, the tension grows and grows until something does happen and it’s all you can do contain your terror.

And the more this particular story appears to be only a regular story about a mother and a daughter who are struggling to find their footing after a divorce and the ongoing fight for the kid’s custody, you just know that there is something ELSE about it. As the movies progresses , it is the almost claustrophobic atmosphere that creeps in little by little: be it in the silence and emptiness of the corridors of the derelict building that mother and daughter move into or in the way it is seems to be always raining outside; be it in the desolated loneliness of a small girl waiting for her mother to pick her up at shcool; 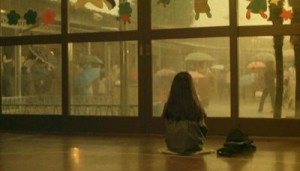 Or more urgently in the ever growing water stain the ceiling of the mother’s bedroom that drips and drips and drips. Glimpses of the mother’s struggle in finding a job, her fight with a clearly abusive husband, her story of psychiatric breakdown almost points to the possibility that this is one of those psychological horror movies where everything inside the protagonist’s head but we, the viewers know better because even though the two main characters at first are unaware of it, there is a presence that seems to be following them around.

It is a small girl with a yellow raincoat and a red bag. Little by little, this presence insinuates itself in their lives until the mystery of who she is, is revealed. The climax of the movie gave me serious goosebumps because it is a mixture of fear and horror in its purest form but also so genuinely sad and poignant because in the end, Dark Water is one of those old-fashioned ghost stories where the ghost wants something that it cannot have and a mother will do anything to save her daughter.

The same climax left me glued to my seat with terror at the same time that tears fell from my eyes. Awesome and brilliant this movie was.

Verdict: I Loved it and recommend it. Go ahead and watch it if you like your horror movies with a bit of a heart: I don’t think you will be disappointed. Just make sure to pick up the Japanese version!

Have you watched Dark Water? Like? Dislike? Let me know!