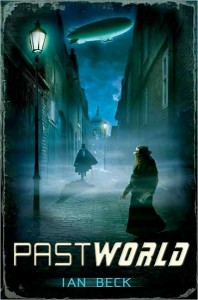 Stand alone or series: At the moment, stand alone but the author does not dismiss a possible sequel.

Why did I read the Book: I saw the cover and read about the premise a long time ago and I knew I wanted to read it.

How did I get this Book: I received an unsolicited ARC of the book from Bloomsbury PLC (and nearly had a heart attack when I opened the package too – please refer to the section above).

Summary: Pastworld. A city within a city. A city for excursions and outings. Pastworld is a theme park with a difference, where travellers can travel back in time for a brush with an authentic Victorian past. But what if the Jack the Ripper figure stopped play-acting and really started killing people? For Caleb, a tourist from the present day, his visit goes terribly wrong when his father is kidnapped and he finds himself accused of murder. Then Caleb meets Eva Rose, a Pastworld inhabitant who has no idea the modern world exists. Both Caleb and Eva have roles to play in the murderer’s diabolical plans – roles that reveal disturbing truths about their origins.

In a not so distant future , after a financial collapse that brought England to its knees, the City of London has been restored to its Victorian past and turned into an immense theme park ran by the Buckland Corporation. The idea is to make the experience authentic and as real as possible and so the inhabitants of Pastworld live as de facto Victorians following fashion, rules and law, never leaving the place. The visitors, or Gawkers, pay a hefty fee to get immersed in the Victorian world arriving by dirigible, the only official way in and out. In order to visit Pastworld, the visitor agrees to dress up and to act as a Victorian and that includes abiding to the rules and should a gawker commit a crime within Pastworld, he or she will be tried and even executed if applicable.

Amongst Pastworld’s inhabitants is Eve, a closeted young girl who lives with her guardian, blind man Jack and who has no idea that there is a world out there. Tired of being kept in the dark, Eve runs away and joins the Circus where she not only discovers the truth about Pastworld but also some unexpected talents. Caleb’s story runs parallel to Eve’s: he is a visitor to Pastworld along with his father Lucius Brown, one of its creators whose visit is in response to a one word message sent to him by Jack after Eve’s disappearance:

But things take a turn to worse when Lucius is kidnapped , Jack is murdered by the Fantom’s ragged men, and Caleb is accused of the crime. Whilst on the run he is helped by street urchin Bible J. who in turn has connections with one of the Fantom’s enemies and with Eve herself. A manhunt starts for not only Caleb and his father but also for Eve, who may be a Very Important Person.

Pastworld is a mystery novel in which Chief Inspector Charles Catchpole of Scotland Yard (Pastworld Division) relates the circumstances behind the nefarious re-appearance of the infamous Fantom, the kidnapping of an important figure connected with the creation of the park itself and the search of a missing girl until the different threads combine to create the whole picture. The ultimate revelation of Eve, Caled and the Fantom’s connection was eerie and it revealed a terrible reflexion from a society fraught with the cult of celebrity. That, coupled with the very idea of turning London into a theme park plus the manner in which the novel is constructed, in itself a clever shout-out to a Victorian novelist, Wilkie Collins (who wrote mystery novels in which the story was an intercalation of several narratives from the different characters) make Pastworld a very good book just short of being a Great One for two main reasons.

One is the reason why so many books do not work for ME as reader: the lack of a character to truly connect with. Both Eve and Caleb are ….weird. I truly can’t find a better word to explain it. Caleb’s reaction to his father’s kidnapping was very strange. They never truly felt real to me although to be fair, in Eve’s case, there is a pretty good reason for her oddness. My favourite character was by far Bible J., possibly because he reminded me a lot of Dicken’s Artful Dodger – perhaps another shout-out from the author to another Victorian luminary?

The second reason stems from a certain frustration I felt because even though the book raises fantastic questions about our future and society, I felt that the author never really explored the most interesting aspect of the novel: the idea of Pastworld itself. It was hinted in some passages that the outside world was a dystopian society living under a “sameness” and those who visit Pastworld are thrill seekers tired of the clean, crimeless world outside. The very fact that crimes were committed in Pastworld so that the Gawkers could experience first-hand murder and mayhem was absolutely terrifying and disturbing. These insights permeated the narrative and added to the story without ever taking centre stage. I understand this is not the story the author chose to tell but it’s one that I nonetheless would have liked to read. Perhaps in another book, Mr Beck? And, yes, in case you were wondering I am fully aware of the irony of wishing for something that could have been whilst reading a book such as this.

In the end, Pastworld is a commendable effort despite some of my misgivings. The descriptions of Pastworld are haunting and evocative, the story is engaging and the premise, oh yes, it is fantastic and creative and the reason why I wanted to read it in the first place and that did not disappoint.

“People visit Pastworld for a variety of reasons. For most it is a trip into the past to experience a way of life and an atmosphere of free and rumbustious living that had, until Pastworld’s completion, all but vanished. The great city of London was chosen, after the apocalyptic financial meltdown at the start of the new century, to be “reverted”. The city was retro-fitted and restored to the condition of the great Victorian heyday. The opening ceremony took place at the re-dedication of the once vandalised and destroyed Euston Arch, and an emotional day it was for those who cared for the architecture of the old city. (…)

Additional Thoughts: The trailer for the book was released just today and it plays like a little movie! I am hummm …not sure about it though. I like parts of it but I am not crazy about others – much like the book itself. What do you think?

Verdict: A very good premise and an atmospheric mystery novel. Although the premise could have been better explored and I wasn’t crazy about the characters, it is still a very good book and I thoroughly enjoyed it.

Joint Review: The Way of Kings by Brandon Sanderson