Title: The Drawing of the Three 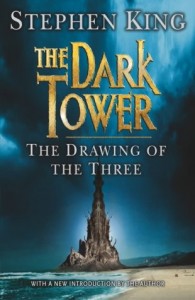 Stand alone or series: book 2 in the Dark Tower series

As the titanic forces gather, a savage struggle between underworld evil and otherworldly enemies conspire to bring an end to Roland’s quest for the Dark Tower.

Why did I read the book: Thea dared me. Gaah.

Stephen King and I have a…complicated history. I have watched plently of movies based on his books but I had never actually read any of his novels. Then Thea made me read The Gunslinger, for our Western Appreciation Week last year, the opening of The Dark Tower, a seven-book series and I really did like it. I finished The Gunslinger and bought book 2, The Drawing of Three straight away but for a myriad of reasons I never actually got around to reading it.

Then, Thea asked me to read another Stephen King book for our Halloween celebration in 2008– It – which I had huge problems with (you can read about the It debacle here) and vowed, yes, I truly did vow never to read Stephen King again. But because I am a weak soul, and Thea is totally a miss bossypants, she actually dared me to read yet another one for our Smugglivus’ Feats of Strength. I then read The Talisman and well. It was a good book but it didn’t wow me. To that point, I could still not see the Stephen King allure.

The intro above is a disclaimer for you to understand my reaction when it was time for another dare and Thea asked me to read The Drawing of the Three. I actually groaned, then rolled my eyes, attempted to postpone the dare at least 4 times, but ultimately couldn’t get away with it (please refer to the miss bossypants part above). Now, here I am. And you know what? I take it back. Curse my feeble mind, I actually really liked The Drawing of the Three.

At the end of book one, our hero Roland of Gilead finally catches up with the Man in Black, the person he had been chasing forever in his search for the elusive, mysterious, Dark Tower. They have a parley and he learns that his Quest effectively starts now. The Man in Black, using a deck of Tarot cards, tells Roland that he will meet three people to join him in his journey and each of then is represented by a card: The Prisoner, The Lady of the Shadows and Death. This is what lies ahead of him and what The Drawing of the Three is all about.

Book 2 starts with a bang, only a few hours after the events at the end of The Gunslinger. The book opens with Roland being alone in a deserted beach and waking up to find that he is having his hands being chewed off by a Lobster Creature – a lobstrosity. He loses his index and middle fingers before he kills the thing. This is really, REALLY bad news because, as his title says he is a Gunslinger. The last one. He needs these fingers to shoot his gun! This means that he kicks-off the last leg of his life-time journey to find the Dark Tower with a deficiency. That my friends, is kick-ass right there.

But never mind, because like any and all good heroes, he carries on. NOTHING will keep him from finding the Dark Tower. The reason behind his journey is still very much a mystery. We still don’t know what drives him, why he wants to reach the Dark Tower so freaking much. It is clear that he will stop at nothing. In book 1, he let a kid, Jake, die. He sacrificed someone he cared for, for his feverish, obsessive pursuit. It was an agonising choice he made, but he made it nonetheless. He is still being haunted by this in The Drawing of the Three which is good – that gives Roland a more human side. That is not to say that he wouldn’t do it again. He would and I think he will. In any case, the sacrifice of Jake was necessary to open the doors from which he draws his three.

These doors, in a very surreal way, appear in the middle of the beach – the first one opens to a different dimension – to a new New York in the mid-eighties. As soon as he opens the door, Roland realises he is inside someone’s mind: that of young guy Eddie Dean, who is a Prisoner of his heroin addiction. After a series of events in dealing with Eddie’s problems with a Mafia boss, Roland draws his first comrade and brings him to his side of the door. Door two opens inside the mind of one Odetta Holmes , the Lady of Shadows, thus named for her dissociative identity disorder. She shares her mind, without knowing it, with a violent, alternate persona called Detta Walker. The third door opens to the mind of the serial killed The Pusher and this third door is what brings all the doors together.

Both Eddie and Odetta/Detta are great characters and Stephen King’s knack for characterisation is present in this series as well. This talent of his is probably what made me dislike It so much – because I adored the characters in that book and hated to see what was made of them. From Eddie’ struggles with his two additions, heroin and taking care of people. To Odetta cool demeanour and Detta’s craziness, each of these people are essential to Roland’s journey for many reasons. They are his companions and will probably help him out but at the heart of it, is the necessary humanisation of a hard-boiled character. His connection with the two characters shows that he is still very much able to love – even if he is willing to sacrifice them all for a greater purpose. He is The anti-hero. Plus, he spends the book, crippled, starving, nearly dying of infection and yet, he manages to capture your attention, to command and demand respect from his companions and from the reader. I am at Roland’s feet in the end, even if I am unable to understand what exactly, drives him.

My main gripe with the book, which is my main gripe with most of Stephen King’s works (expect for The Gunslinger which was short and to the point hence being my favourite so far), is that everything above, this whole story could have been condensed in a much shorter book – I believe that would make all the difference. Stephen King, I said that before and I repeat it here, is a word-waster. There were many, many parts completely irrelevant to the story, shifting point of views to en passant characters that appeared out of nowhere whom I did.not.care one iota. That dragged the book for me quite a lot in the middle (and I admit I skimmed!).

From the very trippy manner in which not only the doors appear and function to the surprising revelation of the final door (one word for you: Susannah), this book was a hell of a journey. There were highs and lows but when the third door opens, it opened up a whole new world to me. It was, for lack of a better word: fantastic. The third, final part of the book was completely, utterly remarkable and it was right then that I saw it. I saw how The Dark Tower is not only Thea’s favourite series of all time but also what is considered to be Stephen King’s Magnum Opus. I put the book down and immediately went online and bought book 3.

Very well. I am now a man with no food, with two less fingers and one less toe than I was born with; I am a gunslinger with shells which may not fire; I am sickening from a monster’s bite and have no medicine; I have a day’s water if I’m lucky; I may be able to walk perhaps, a dozen miles if I press myself to the last extremity. I am, in short, a man on the edge of everything.
Which was should he walk? He had come from the east; he could not walk west without the powers of a saint or a saviour. That left north and south.
North.
That was the answer his heart told. There was no question in it.
North.
The gunslinger began to walk.

Verdict: With these great characters, Stephen King has a solid band of brothers and sisters to tell his story. A bit uneven but still very good. I will definitely read the next one.

Reading next: Tempt Me At Twilight by Lisa Kleypas

Book Review: Newes from the Dead by Mary Hooper