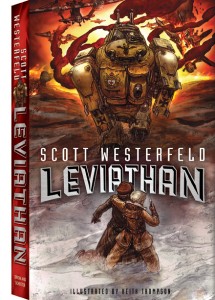 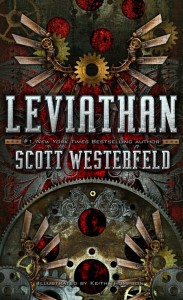 Stand Alone or series: First in a planned trilogy

Summary: Prince Aleksander, would-be heir to the Austro-Hungarian throne, is on the run. His own people have turned on him. His title is worthless. All he has is a battletorn war machine and a loyal crew of men.

Deryn Sharp is a commoner, disguised as a boy in the British Air Service. She’s a brilliant airman. But her secret is in constant danger of being discovered.

With World War I brewing, Alek and Deryn’s paths cross in the most unexpected way…taking them on a fantastical, around-the-world adventure that will change both their lives forever

Why did I read the Book: Well, there was the cover which I love. Then, the premise which I thought intriguing. THEN Sarah Rees Brennan started raving about the book. Also I heard that Mark had LOVED it. THEN, there was the wicked book trailer:

How could I not read this?

Summer 1914. Europe is on the brink of war. On June 28, Archduke Ferdinand, heir to the Austria-Hungary’s throne and his wife, Sophie, are murdered by Serbian revolutionaries and this one event is the catalyst to the ensuing sequence of alliances that eventually led to what became known as World War I. To one side, German and Austria also known as Clankers for their countries’ reliance on machines; to the other, Britain and its allies, known as Darwinists for their biotech.

On that same June night, Ferdinand and Sophie’s 15 year old son Aleksander goes on the run from his own people. His father was the presumed heir to the throne but Alek himself has no right to it: his mother was a commoner whom his father married for love under the condition that their descendents were not permitted to be in line for succession. Still, Alek’s very existence may become an issue for the reigning monarch and he has to go. With the help of two of his father’s trusted allies who know of a secret that can tip the diplomatic balance, they take one of their Walkers and attempt to cross the country to Switzerland.

On the other end of the spectrum, Deryn is a girl pretending to be a boy so she can pursue her dream to become a member of the British Air Force. On her first day of training, an accident occurs and she ends up joining the crew of the Leviathan, Britian’s most famous airship in their secret mission across Europe taking scientist Dr Barlow and a mysterious crate all the way to the Ottoman Empire, a Clanker nation.

The chapters – two at a time –alternate between Alek and Deryn and their solo adventures, leading building up to the inevitable moment where both storylines will collide into one.

And now, I take a step back from the self-possessed reviewer to say that:

Whoa! Leviathan is SO wicked cool!

I can attest that all the hype is justified. The book is a non-stop action story, with an incredibly imaginative steampunkish world-building, two very sympathetic protagonists and amazing illustrations and I loved every minute of it.

Leviathan is set in an alternate history Europe (for example, all the facts about Ferdinand and Sophie were true and their murder did lead to the Great War but they never had a child named Alek.) and the war against nations is also a war of technologies or ideologies based on those technologies. The Clankers use huge machines that are almost within the realm of possibility. But really , the Darwinist’s creation are mind blowing: in this world, Darwin was also the person to discover DNA and as early as the 19th century, Britian was already deep into genetic creations. It is hard to describe exactly how it works but Leviathan, for example is a huge, crewed, flying WHALE fuelled by hydrogen-farting bacteria living in its stomach!

Premise and world-building aside, the two kids, Alek and Deryn are what make Leviathan stand out for me, as I am always on the look-out for great characters. They each are immersed in their own culture and have their views about Clankers x Darwinists and it is through their eyes that questionings about each side are raised and they both come out as sympathetic. I was especially concerned about the ethic issues of using living creatures like the Darwinists do and I was happy to see it addressed even if not necessarily in depth. I was left with the certainty that those issues will come into play as the series progress.

The difference between Alek and Deryn come not only from their background but also from their upbringing. Alek, of course has been tutored by the best people in Europe and there is this one great scene where he goes to buy a newspaper and realises that even though he can speak several languages including Latin, he could hardly communicate about day to day affairs with his own people. The more time Alek spends on the run, the more he realises and notices different realities.He is a stuffy member of aristocracy and behaves like one. It is in his posture, his actions, the way he speaks. In some ways, Deryn who is a girl, behaves much more like a boy than Alek does.

As for Deryn, I absolutely loved her and her stance on what she could or could not do. The mere fact that she is girl could not, would not stand between her and her skills as an airman. (I will refrain from commenting on the fact that she embarks in this cross-dressing adventure with the amen from her family and no one makes a point about pesky things like for example: what happens when she gets her period, or her breasts start to develop? What then? I am hoping this will come into play later in the series). But I truly loved her, especially her sense of humour. There is this one scene when she is flying a Huxley (a balloon type of flying object which is in fact, a medusa) and she felt so exhilarated that she wanted to make a speech:

“Hey, all you sods, I can fly and you can’t! A natural airman, in case you haven’t noticed. And in conclusion, I’d like to add that I’m a girl and you can all get stuffed!”

I loved when they finally met and how they fought for what they believed in – they cannot really trust each other at first given how they are in opposite sides but soon, they must learn to work together, and I can’t help but to wonder (and hope) that perhaps their own story will mimic that of Alek’s parents.

The only thing marginally negative I have to say about this whole experience is that the book ends with far too many unanswered questions, a minor cliff-hanger and the sequel Behemoth, is not out until October 2010!

Notable Quotes/ Parts: No review of this book can be complete without a mention to the illustrations by Keith Thompson. There are 50 of them in the book and they are AMAZING and complement the story perfectly.These are a couple from the author’s website 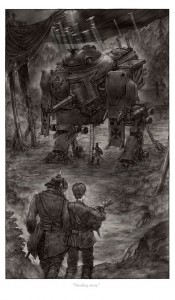 Alek and a Walker 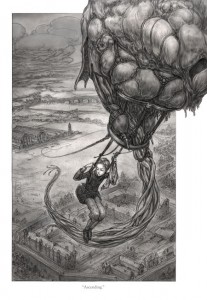 Deryn and the Huxley

Verdict: Great story and world-building, sympathetic, belieavable characters and beautifully illustrated . I highly recommend this to YA and adults alike.

Reading Next: Triumff by Dan Abnett