Book Review: The Book of Phoenix by Nnedi Okorafor

A fiery spirit dances from the pages of the Great Book. She brings the aroma of scorched sand and ozone. She has a story to tell…. 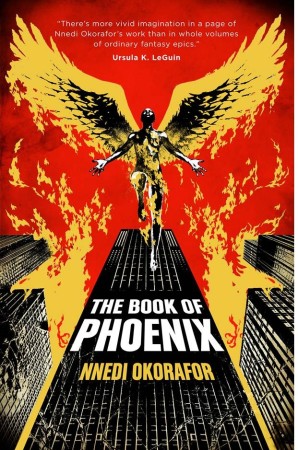 Title: The Book of Phoenix

A fiery spirit dances from the pages of the Great Book. She brings the aroma of scorched sand and ozone. She has a story to tell….

The Book of Phoenix is a unique work of magical futurism. A prequel to the highly acclaimed, World Fantasy Award-winning novel, Who Fears Death, it features the rise of another of Nnedi Okorafor’s powerful, memorable, superhuman women.

Phoenix was grown and raised among other genetic experiments in New York’s Tower 7. She is an “accelerated woman”—only two years old but with the body and mind of an adult, Phoenix’s abilities far exceed those of a normal human. Still innocent and inexperienced in the ways of the world, she is content living in her room speed reading e-books, running on her treadmill, and basking in the love of Saeed, another biologically altered human of Tower 7.

Then one evening, Saeed witnesses something so terrible that he takes his own life. Devastated by his death and Tower 7’s refusal to answer her questions, Phoenix finally begins to realize that her home is really her prison, and she becomes desperate to escape.

But Phoenix’s escape, and her destruction of Tower 7, is just the beginning of her story. Before her story ends, Phoenix will travel from the United States to Africa and back, changing the entire course of humanity’s future.

Why did I read this book: I read Lagoon last year and thoroughly loved it. When I received a copy of this book I knew I would read it, even though I have not read Who Fears Death (and now I REALLY want to).DAT COVER.

It opens in the far future with a discovery: a man walks into a cave and finds treasures from another era, computers and information that have been long lost to time. Amongst the findings is The Book of Phoenix, with a tale that might hold the answers for how the world became what it has. The narrator of the Book starts:

My name is Phoenix. I was mixed and grown in a lab on the 13th floor. One of my doctors thinks my name came from the birthplace of my egg’s donor. I’ve looked it up. Phoenix, Arizona is the full name of the place. However, from what I’ve read about my floor, even the scientists who forced my existence don’t know the names of donors. So, I doubt this. I think they named me Phoenix because of what I was, an “accelerated organism.” I was born two years ago but I looked, behaved and felt like a forty-year-old woman. My doctors said the acceleration would stop now that I was “matured”. To them, I was like a plant they grew for the sake of harvesting information.

As an “accelerated human”, a scientific experiment built by a corporation and raised amongst other genetic “specimens” New York’s Tower 7, Phoenix is only two years old and although her body is that a forty year old woman, her mind is still growing and adapting. Naïve at first, Phoenix is content in spending her time in Tower 7 reading countless books, hanging out with other altered people including her love Saeed and best mate Mmuo, and being experimented on. Those experiments produce results that no one knows exactly how to interpret but Phoenix knows that there is a power inside her yearning to get out.

Then Saeed sees something terrible inside Tower 7 and takes him own life. Phoenix is distraught and the result of her grief is cataclysmic: in her rampage, all the other specimens are freed, Tower 7 is destroyed and Phoenix herself dies…

…only to be reborn, like a mythological Phoenix. Her new life is the start of a journey of destruction, revenge and self-discovery that will change not only Phoenix’s life but the world, forever.

The Book of Phoenix is a stand-alone Science Fiction prequel to Nnedi Okorafor’s award-winning novel Who Fears Death. It’s a novel set in a post- climate-change but still pre-apocalyptic world. It works in multiple levels, its effectiveness stemming from both the way the book is framed and the multi-layered narrative.

The former works literally and figuratively. The story is bookended by a told tale, steeped in oral traditions as well as advanced technology and this mixture of old-fashioned and futuristic is an incredibly affective aspect of The Book of Phoenix which also serves as metaphor: who are we if not our ancestors? Who are we when we don’t know who we are and the others who came before? This is built into story as a deeply personal search as well as a socio-economic, macroscopic one. Most characters in the book or rather, most genetically modified, experimented on characters are of African descent and the racial facet of exploitation, cruelty is not lost on Phoenix. In that sense, Phoenix, ultramodern, superhuman Phoenix, is both future and past and in more ways than you can imagine. Her voyage to Africa and back and her resolution to not ever make that journey on a boat is a nod to history and a break from it.

The multi-layered scope of the book is what makes it work though: it’s a book about religion, about the future, about consequences. About racism and sexism. It’s a story that delves deeply into myth-making, and history. It is also simply, a super ultra-cool story about super-powered people doing awesome revenge stuff, taking back their lives and blowing shit up.

It ends in the far future with something as simple as interpretation: a man gets the answers to those initial questions and reads them the only way that he can. This ending, sharp and unyielding in its heart-breaking, realistic tone, circles back to one of the strongest, most powerful ideas in the novel:

“We’re so colonized that we build our own shackles.”

There is no book about me. Well, not yet. No matter. I shall create it myself; it’s better that way. To tell my tale, I will use the old African tools of story: Spoken words. They’re more trustworthy and they’ll last longer. And during shadowy times, spoken words carry farther than words typed or written. My beginnings were in the dark. We all dwelled in the darkness, mad scientist and specimen, alike. This was when the goddess Ani’s still slept, when her back was still turned. Before she grew angry at what she saw and pulled in the blazing sun. My story is called The Book of Phoenix. And it is short because it was…accelerated.

I’d never known any other place. The 13th floor of Tower 7 was my home. Yesterday I realized it was a prison, too. Granted, maybe I should have suspected something. The two-hundred-year-old marble skyscraper had many dark sides and I knew most of them. There were 39 floors, and on almost every one was an abomination. I was an abomination. I had read many books and this was clear to me. However, this place was still my home. Home: a. One’s place of residence. Yes, it was my home.

They gave me all the 3D movies I could watch, but it was books that did it for me. A year ago, they gave me an e-reader packed with 700,000 books of all kinds. When it came to information, I had access to everything I wanted. That was part of their research.

Research. This was what happened in Tower 7. There were similar towers around the world but Tower 7 was my home, so this one was the one I studied. I had several classified books on Tower 7. One discussed each floor and some of the types of abominations found on them. I’d listened to audios of the spiritual tellings of long dead African and Native American shamans, sorcerers and wizards. I’d read the Torah, the Bible, and the Koran. I studied The Buddha and meditated until I saw Krishna. And I read countless books on the sciences of the world. Carrying all this in my head, I understood abomination. I understood the purpose of Tower 7. Until yesterday.

In Tower 7, there was “transformative” genetic engineering, the in-vitro fertilization of organic robots, “rejuvenation” surgery on the ancient near-dead, the creation of weaponized weeds, the insertion and attaching of both mechanical and cybernetic parts to human bodies. There were people created in Tower 7, some were deformed, some were mentally ill, some were just plain dangerous, and none were flawless. Yes, some of us were dangerous. I was dangerous.

Then there was the tower’s lobby on the ground floor that projected a different picture. I’d never been down there but my books described it as an earthly wonderland, full of creeping vines covering the walls and small trees growing from artistically crafted holes in the floor. In the center was the main attraction. Here grew the thing that brought people from all over the world to see the Tower 7 Lobby (only the lobby; there were no tours of the rest of the building).

A hundred years ago, one of the landscapers planted a tree in the lobby’s center. On a lark, some scientists from the 9th floor emptied an experimental solution into the tree’s pot of soil. The substance was for enhancing and speeding up arboreal growth. The tree grew and grew. In a place where people thought like normal human beings, they would have uprooted the amazing tree and placed it outdoors. However, this was Tower 7 where boundaries were both contained and pushed. When the tree began touching the lobby’s high ceiling in a matter of weeks, they constructed a large hole so that it could grow through the second floor. They did the same for the third, fourth, fifth. The great tree has since earned the name of “The Backbone” because it grew through all 39 of Tower 7’s floors.