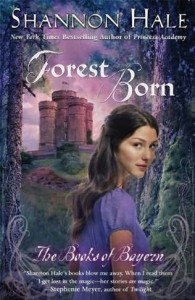 Stand alone or series: Book four in the Books of Bayern series.

Why did I read this book: I recently read all three Books of Bayern (The Goose Girl, Enna Burning, and River Secrets) for our Young Adult Appreciation Month, and I loved them all. So, when Ana informed me that we received a copy of Forest Born, I was ecstatic.

Summary: (from amazon.com)
Rin is sure that something is wrong with her…something really bad. Something that is keeping her from feeling at home in the Forest homestead where she’s lived all her life. Something that is keeping her from trusting herself with anyone at all. When her brother Razo returns from the city for a visit, she accompanies him to the palace, hoping that she can find peace away from home. But war has come to Bayern again, and Rin is compelled to join the queen and her closest allies—magical girls Rin thinks of as the Fire Sisters—as they venture into the Forest toward Kel, the land where someone seems to want them all dead. Many beloved Bayern characters reappear in this story, but it is Rin’s own journey of discovering how to balance the good and the bad in herself that drives this compelling adventure.

Rin is the youngest born and the only girl of her five siblings. Growing up in the forests that surround the capital city in Bayern, Rin lives a quiet life as her mother’s “shadow,” helping anyone that needs her, mirroring their behaviors and attitudes. Rin copies others because she guards a terrible secret – though Rin is a quiet and gentle seeming girl, she knows that there is something very wrong inside of her. When she was younger, she could listen to the trees in her beloved forest, feeling their gentle calm. But ever since she manipulated her niece and a local boy, the trees have turned away from her. When she opens herself to their calm, all that she can feel is cruel rot and and festering decay. Rin grows more and more distressed as time passes, and fears that she will lose her mind if she has to stay in the forest surrounded by this gnawing feeling of wrongness within her – so when Razo returns from his last trip to Tira with ambassador and girlfriend Lady Dasha, Rin decides to follow them to the royal city. When she meets Queen Isi, and discovers the collective powers that Enna, Isi and Dasha have (a group Rin nicknames as the “Fire Sisters”), she is certain that they can help her control her own growing darkness within. And when trouble threatens Bayern’s borders from an unknown foe and the Fire Sisters take off to settle matters, Rin goes with them. Little does she know that her own untapped talents will help save Bayern from the clutches of a terrifying, formidable enemy.

I have only just discovered Shannon Hale this year, and I’ve loved every book I have read by her thus far – from Rapunzel’s Revenge to the beloved Books of Bayern. Though The Goose Girl remains my favorite of the latter series, Forest Born gives it a run for its money – I absolutely loved this latest installment.

Forest Born stands apart from the other Bayern Books by introducing a new character in Rin, Razo (star of River Secrets and regular face in the series)’s little sister. Unlike the other main characters in this series to date, Rin is truly, deeply troubled. In ways that the lighthearted Razo or brashly confident Enna don’t really tackle in their books, Rin is a heroine more similar to Isi in The Goose Girl – both characters are uncertain of themselves initially and learn to accept their own inner strength. Similarly, Rin has to come to terms with her own mysterious abilities in a way different to the prior books. While Enna struggled with her Fire speaking, Isi with her wind speaking, and Dasha with her water speaking, Rin’s struggles seem to dwarf the others as infinitely more severe. Unlike these other characters, Rin’s problems are rooted deeply in her own sense of worth (or lack thereof). If Enna Burning could be interpreted as a metaphor for addiction to power, Forest Born is one of coming to terms with depression. While it’s true that to some extent the other characters staved off becoming overwhelmed by their powers, Rin’s lifelong inner battle to not only release her sense of self-loathing, but also discover who exactly she is as a person – as opposed to mimicking those around her – is something far more intense than anything Isi, Enna or Dasha experienced combined (and no less life-threatening than the events of Enna Burning). Of all the characters, Rin’s burden is the heaviest and darkest and this translates in the story.

As such, Forest Born is also far more bleak than the other novels in the Bayern series. This may turn off some readers – in fact, when I was about half through the book, even after finishing it, I wasn’t sure how to feel. Rin is much more vulnerable than her predecessors, and as a heroine she comes to terms with some very shocking, soul-crushing revelations about herself. But the more I think about Rin and her journey in Forest Secrets, the more I love her and her fantastic novel. The plotting, per Ms. Hale’s usual, is near flawless in its pacing and scope – from the forests of Bayern, Ms. Hale takes readers to the far reaches of Kel, examining a new people and culture previously unseen in earlier books. As with the dramatic colored tunics and heat of Tira, the strange folks of Yasid, the darker complexioned inhabitants of Bayern compared to the fair-haired children of Kildenree, Ms. Hale’s realm of Kel creates a new language and background of people. And, as always, Forest Born is written with Ms. Hale’s graceful, breathtaking words:

Rin learned to crawl on moss and walk on pine needles, and by the age of four could climb a fir as easily as fall into bed. That was thanks to Razo, who never had worked up a reason to push his little sister. When Rin was not clinging to her ma, she was running after her brother. She talked some and laughed some, but mostly she watched–the faces of her brothers, the sway of the trees. She watched the world the way most people breathed air.

“That girl sees the bones inside birds,” her ma would say. “That girl can see your soul.”

In a departure from the norm so far in the series, I should also mention that Forest Born also does not feature a romance plot between Rin and some male character – which again may turn off some readers who have come to expect the pairings in the Bayern Books, but I think this works to the book’s favor. Rin hardly knows who she herself is and the focus of the book is her coming to grips with herself and her powers, and to throw in a love story would be unrealistic. Finally, I should say that Forest Born features a truly wonderful, evil villain – the likes of which have not been seen since the ghastly Selia of The Goose Girl. Not only does Rin have to come to terms with her inner darkness, she must combat a rival’s in a way that only she can. It’s infuriating and marvelous and breathtaking all at once.

Ms. Hale writes a very different, dark, but ultimately heartwarming novel with Forest Born, and I truly loved it. My second favorite of the Bayern Books, short only to The Goose Girl.

Ma had six sons. The eldest boy was big like his father, the middle boys were middling. By the time Razo was born, all the family’s largeness must have been used up. The brothers called him runt and made him feel that word. He spent winter nights longing for a younger sibling, someone he could call runt, someone he could push and pinch.

Ma was longing too, but for a girl to share thoughts with, a daughter cut and sewn from her own soul.

When Razo was almost five, he and Ma both got their wish. The baby girl was born on a night so hot the wind panted and the summer moon blazed like the sun.

“Rinna-girl,” said Razo, peering over the side of the cot.

The baby blinked huge, dark eyes and opened her mouth into a tiny circle. All desire to push and pinch hushed right out of Razo.

He bent closer to her ear and whispered, “I’m going to teach you to climb trees.”

Ma did not allow her baby girl into any timber, though Razo, with a trembling kind of impatience, looked her over each day to gauge if she’d grown big enough. The dark-haired baby cried if Ma put her down, so Ma did not put her down. She did chores with her daughter strapped to her side.

One spring morning when Rinna was two, her father went hunting in the deep Forest. Three days later, Ma sent her older boys to look for him. They found his pack and some bear prints, a reminder not to wander far.

That night in the one-room house built of pine, the brothers stared stiff-eyed at the darkness, the unfamiliar sound of their mother’s sobs spooking them to wakeful silence. No one moved, except Rinna.

She crawled off her mat at the foot of her parents’ cot and lay down by Ma, fitting into the curve of her body.

“My peaceful girl,” Ma whispered. “My tender Rin.” She kissed the top of her daughter’s head and sighed before falling asleep.

Rin sighed too. She slept with her nose touching her mother’s shirt, her dreams laced with the scent of the juniper berries Ma loved to chew.

You can read the full excerpt online at Shannon Hale’s website HERE.

Additional Thoughts: While readers will appreciate Forest Born infinitely more if they read the books in order first, this can be read as a standalone, or as a starting point.

As always, Ms. Hale includes a lot of great information on her website page for Forest Born, including deleted scenes and a “lost chapter”. 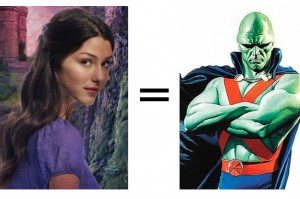 But you know what else is pretty cool? Ms. Hale includes a character exercise in which she assigns her Bayern characters corresponding Justice League personas, with Rin as the Martian Manhunter. Vulnerability to fire and all. It’s not really a perfect list (Enna’s not nearly as fair minded as Wonder Woman, but that’s ok. I like Isi as Superman though, gender aside!), but fun nonetheless.

Verdict: I loved Forest Born from its lyrical beginning to its powerful end. This heroine’s path of realization and self-acceptance is a beautiful journey to be savored by readers of all ages. Absolutely recommended.