Today we have something different: a while back we received a review copy of a Fantasy novel called Avilion by Robert Holdstock – we fell in love with the cover and with the blurb and after doing a bit of research we found out that the novel was a sequel to what many consider a classic in the genre, Mythago Wood, published 25 years ago. We both wanted to read it but given our YA Month schedule, we realised we wouldn’t be able to, at least not so soon. As it is against our credo to leave books gathering dust in our shelves if it can be avoided, we conferred and decided to invite our buddy Gav to read the book and review it for us. Gav runs a really good Speculative Fiction blog called NextRead (which recently went through a makeover by the way, and looks FAB) and we thought he would be a perfect fit – for the book and for our blog. Gav, not only said yes but went beyond the call of duty by reading the first book as well!

We welcome Gav to the Book Smugglers – here is what he has to say: 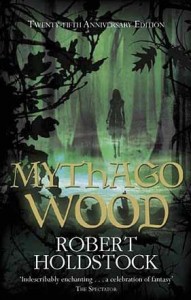 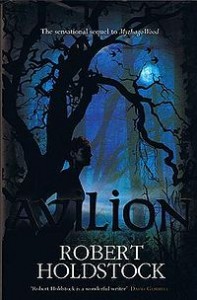 Stand alone or series: The original and its sequel after 25 years

Summary:
Mythago Wood: Deep within the wildwood lies a place of myth and mystery, from which few return, and none remain unchanged. Ryhope Wood may look like a three-mile-square fenced-in wood in rural Herefordshire on the outside, but inside, it is a primeval, intricate labyrinth of trees, impossibly huge, unforgettable . . . and stronger than time itself.

Stephen Huxley has already lost his father to the mysteries of Ryhope Wood. On his return from the Second World War, he finds his brother, Christopher, is also in thrall to the mysterious wood, wherein lies a realm where mythic archetypes grow flesh and blood, where love and beauty haunt your dreams, and in promises of freedom lies the sanctuary of insanity . . .

Avilion: At the heart of Ryhope Wood, Steven and the mythago Guiwenneth live in the ruins of a Roman villa close to a haunted fortress from the Iron Age, from which Guiwenneth’s myth arose. She is comfortable here, almost tied to the place, and Steven has long since abandoned all thought of returning to his own world. They have animals, protection and crops.

They also have two children, a combination of human and mythago. Jack is like his father, an active boy keen to know all about `the outer world’; Yssobel takes after her mother, even to her long auburn hair.
But this idyll cannot last. The hunters who protected Guiwenneth as a child have come to warn her she is in danger. Yssobel is dreaming increasingly of her Uncle Christian, Steven’s brother, who disappeared into Lavondyss, and Jack wants to see ‘the outer world’ more than anything. Events are about to overtake them.

Thanks for letting me guest post. This is a first for me. It’s also my first dual review. I was offered the chance to review Avilion but I always want to start at the beginning when possible so I thought I’d review both Mythago Wood, that’s considered a classic and its sequel that comes after a twenty-five year wait. The question is was it worth it? And I’d have to say yes it was.

Avilion isn’t a direct sequel to Mythago Wood but it does pick up the story after Mythago Wood ends and then heads off in a different direction. Mythago Wood starts when Stephen Huxley returns to the family home after the events of the Second World War to find his brother Christopher obsessed like their father with Ryhope Wood which may only be three-miles square but in its borders it contains boundless worlds created in part from the imagination of those who enter or are effected by it.

Their fathers obsession with the myth-imagined wood and its various creatures and inhabitants leads him further and further away from his family until he is lost with in the woods himself. And it’s this obsession that infects Christopher and leads to his transformation.

If I had to sum up Mythago Wood I’d say it was a love story mixed with an exploration of the power of story, of myth and story in our lives. And how we may not actually control our actions. That we might be just characters in a story. And Holdstock gives life to those stories and shows are they are connected in their reshaping and retelling.
There is a story of a woman who as a baby was stolen before being rescued. That same woman, or a version of that woman is who Christopher falls in love with before losing her like his father. But he knows the nature of her story and tries to call her back. Though she doesn’t come back the same. She is changed in the retelling. And it’s another version of her Stephen falls in love with. It’s this conflict between loss and story and their reshaping that drives Mythago Wood.

This isn’t a story you can read if you’re not paying attention as Holdstock weaves layer upon layer of meaning into the places, events, people, and tales that they all echo and enhance each other and that’s what makes Mythago Wood a classic. It really is.

I was sceptical at first of this love triangle. I thought that Holdstock might linger too much on the sweetness of a new relationship through the eyes of Stephen make Christopher’s loss too bitter.

But no, he manages to tell a moving and magical tale that is both meaningful, haunting and one that needs rereading to peel more layers from it and explore both the Wood and its characters some more.
And that’s what he does with Avilion. There is no real happy ever after. Though there was for a time resulting in Jack and Yssobel, both green, from Mythago, and red, from human. This time Holdstock takes a different path and a different journey. This time he explores deeper into the wood and those imaginings that could be present there but less directly the myths that go into shaping them. Though you’ll spot plenty of references they aren’t signposted nearly as strongly.

Mythago Wood is strongly driven by one story. But Avillion is about unfinished business and the haunting effects of a story that has been told. But no story really ends. Jack who is more red than green wants to go to the edge of the wood into the ‘real world’ but his sister wants to explore deeper into the woods to Avilion itself.

Though its genesis is the story of Stephen and the woman who was stolen whom he rescued and loved. It’s definitely Jack and Yssobel’s book. Holdstock takes us through the woods from the other side through the point of view of insiders. And nothing is made but clearer than before. The Mythago is a world or worlds each shaped by those that exist there or at least within those worlds that are created for them. So we again only see shades but through more windows.

I felt less emotion reading Avilion than Mythago Wood but that’s the nature of the tales. The first is a love story with all the powerful emotions that go with that. Avilion is about journeys and finding peace or at least not resting until you’ve answered the call.

Holdstock has made a sequel that doesn’t interfere with the power of the original. Avilion though is based strongly in its foundations. It would lose a lot of its power unless you understand what happen to Stephen, Christopher and the stolen woman. And why the stolen woman fears Christopher and why Stephen is powerless to rescue her again.

Verdict:
Mythago Wood is a classic and wonderful example of the power of imagination and what fantasy can actually be when it’s rethought and reworked from its origins rather than rehashing a bunch of stereotypes. It’s a book that demands a reread to understand all the bits you liked but didn’t understand the first time.

Avilion is a worthy successor though not as powerful as the original. The tone and the story does that those echoes and retelling that made the original so fascinating and powerful. Though it does build up the story in a way that makes it interesting and worth reading if you want to know more about the Ryhope Wood and what became of Stephen and Christopher.

Rating: I don’t usually give ratings but seeing as I’m a guest I’ll following the house rules.

Additional Thoughts: Robert Holdstock wrote an interesting article about the 25 year gap between the two books, the world he created and his relationship with it. Check it out.

And a big thank you to Gav – great job, mate!