Title: Dreaming of You 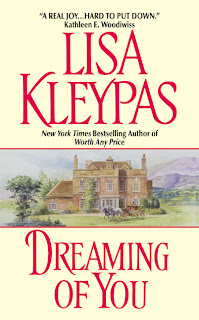 Stand Alone or Series: Can be read as a stand alone, although is a sequel of Then Came You, following different main characters

Why did I read this book: After reading and really enjoying the first book, Ana encouraged me to try this sequel. For months it sat on my TBR shelf, until we decided to do a Lisa Kleypas appreciation week, and I had run out of stalling excuses!

Summary: (from amazon.com)
In the shelter of her country cottage, Sara Feilding puts pen to paper to create dreams. But curiosity has enticed the prim, well-bred gentlewoman out of her safe haven—and into Derek Craven’s dangerous world.

A handsome, tough and tenacious Cockney, he rose from, poverty to become lord of London’s most exclusive gambling house—a struggle that has left Derek Craven fabulously wealthy, but hardened and suspicious. And now duty demands he allow Sara Fielding into his world—with her impeccable manners and her infuriating innocence. But here, in a perilous shadow-realm of ever-shifting fortunes, even a proper “mouse” can be transformed into a breathtaking enchantress—and a world-weary gambler can be shaken to his cynical core by the power of passion. . .and the promise of love.

As Ana can testify, I am not a romantic reader at heart. I love romantic themes and a large side serving of it with my books, but it’s not really my element. So, it was with some reluctance that I read some of Ana’s suggestions. I had read some of Lisa Kleypas’s other works–the Wallflowers series, Sugar Daddy, and finally the prequel Then Came You–and loved them. But considering the “classic” label on this historical romance, and keeping in mind some of my less than completely enamored forays into the genre, I put off reading this novel. When we landed an interview with Ms. Kleypas, however, I decided that it was finally time to take this book off the shelf, peel off that Borders price tag, and get reading.

And wouldn’t you know it–I loved this book. Move over Dain, Lord of Scoundrels of Loretta Chase’s classic titled novel–you’ve got some serious competition with Derek Craven.

Sara Fielding is a sensible woman. From her sheltered country life, she lives vicariously through the characters she writes about–for Sara also is none other than S R Fielding, noted popular author. Her next book project is to be set in a gambling hall, and her extensive research takes her to the most well-renowned social club in London–and home to the infamous blackguard owner, Derek Craven. The story opens with Sara frantically scribbling away in her notebook, on a dark street outside of the club. Derek steps outside and notices the small woman by herself in the area and snickers to himself that she must be some kind of fool to be out alone in this neighborhood, especially as the hour grows late. And then, he is attacked by unknown assailants. Outnumbered, Derek’s face is slashed by one of his attackers. Sara notices the commotion and fears that the attackers mean to kill the unknown man in the street, and she produces a pistol, aiming a wide warning shot to entice the men to leave. Sara’s warning shot, however, strikes home and she kills the knife wielding assailant, shot dead in the throat. Shocked and racked by guilt, Sara still hastily makes her way to help the attacked man, trying to stop his bleeding face with her handkerchief. Derek, dazed, tells her to stop her ministrations and get him inside Craven’s. The two make it inside the club, and Sara learns that the man whose life she has just saved is none other than the man she has been anxious to meet firsthand. In return for her services, Derek scowls and offers her monetary compensation, but Sara refuses. Instead, she asks to be able to observe the club first hand, in research for her book. Derek refuses, but his Factotum Worthy takes a liking to Sara and encourages her to come back the next day so he can show her around.

And thus, Sara and Derek’s fates are intertwined.

At first glance, this seems to be another sweet Regency Romance novel, where a jaded hero from shady beginnings becomes saved by the love of an innocent, kindhearted woman. To a certain extent this is true–Derek Craven is bitter, afraid of emotions, and revels in the fact that blue-blooded women will eagerly take him into their beds while he grows ever richer from the aristocratic men that frequent his club. Similarly, Sara Fielding is sensible and empathetic; she treats everyone–from cooks to house wenches–with the utmost courtesy, and is actually a beautiful woman underneath her high necked dresses and spectacles. Derek craves and loathes acceptance; he feels that he does not deserve the love of anyone especially with his dark past. Sara offers all that she is without artifice, and despite her simple, sheltered life, craves the danger and adventure that she writes of in her books. Of course these two characters are destined to find everything they need in each other.

Granted, the story is an old one. But it would be doing Dreaming of You a gross disservice to summarily dismiss this novel as such. No–this is one of those books that has “IT”. You know, the thing. The one that makes you smile, holds you captive, both frantically eager to rush through the story and yet desperately fearing the sorrow you will feel once you finish that last final sentence. There is a reason why Dreaming of You is in so many top ten romance novels lists–it really is that good.

Ms. Kleypas’s writing is flawless–while Loretta Chase’s Lord of Scoundrels still holds the top spot in my heart as favorite romance novel, Ms. Kleypas has firmly lodged herself atop my “favorite romance author” pedestal (be it of the historical or contemporary setting). Her prose is captivating, almost effortlessly transporting readers to Regency England. I marvel at the seamless command of setting Ms. Kleypas employs. In Sugar Daddy, I was captivated by her understanding and ability to bring Texas to life. Here, in Dreaming of You, with her vivid descriptions she makes Craven’s gambling hall tangible, in all its decadence.

And the characters–truly, what characters they are. Although I prefer Ms. Kleypas’s more fiery heroines–Lawless Lily and Lillian Bowman in particular–Sara’s gentle nature, coupled with her impulsive streak, make her a heroine I could not help but love. And Derek! I have to ring in on the St. Vincent vs. Derek Craven debate here–in this reviewer’s honest opinion, Derek Craven totally kicks St. Vincent’s pretty ass. (Sorry Ana!) As a character, Derek’s troubled past, his issues with commitment, his desire to be accepted and yet his own self loathing are all beautifully penned here by the capable Ms. Kleypas. Truly, Dreaming of You is Derek’s story, his struggle with his serious demons, and finally accepting happiness when it is in front of him. Every character in this book from the leads to the hideous Martha Kingswood or vile Joyce Ashby feels wholly real. Their motivations, their actions, all of it is completely believable and beautifully written.

Dreaming of You is one of those classic novels that deserves every bit of praise it receives. I finished this novel with a big, silly smile on my face–and this is coming from the chick who at times suspects that she is missing the romantic gene.

I loved every second of it, and know this book will be one I revisit again and again.

Notable Quotes/Parts: Oh, where to start! The scene where Sara discovers where her spare glasses have been. The interlude in the wintry garden at Lily’s ball. In the interests of letting people discover these scenes for themselves, I’ll quote a sweet section where Worthy relates to Derek how he feels for Ms. Fielding:

Leaving the reticule as Sara had placed it on the desk, Derek jammed his hands into his pockets and began to walk with no particular destination in mind. He thought of the way Worthy had sung Sara Fielding’s praises yesterday. Not even the former Lily Lawson, with all her sparkling allure, had been able to elicit such devotion from the factotum.

“She is a lady of quality,” Worthy had said in response to one of Derek’s sarcastic barbs. “Ms. Fielding treats everyone she encounters with kindness and courtesy, even the house wenches. Before she leaves the club in the evenings, she voluntarily writes letters dictated to her by some of the illiterate members of the staff so that they might send word to their families. When she saw that the hem of Violet’s gown needed mending, she asked for a needle and knelt down on the floor to fix it. One of the maids told me yesterday that when she tripped with a pile of linen in her arms, Miss Fielding stopped to help her gather it up–“

“Maybe I should hire her,” Derek had interrupted sarcastically.

“Miss Fielding is the most gentle, tolerant woman who has ever set foot in this club. And perhaps I should take this opportunity to tell you sir, that the staff has been complaining.”

Worthy nodded stiffly. “That you have not be according her the proper degree of respect.”

Verdict: I loved this book. Against all my preconceived prejudices against romantic classics, I can safely say that Dreaming of You is one of the best representatives of the genre. I loved every second of this book.

Reading Next: A Wallflower Christmas by Lisa Kleypas