Guest Dare (and giveaway): Principles of Angels by Jaine Fenn

Welcome to yet another Guest Dare – the July edition. For those new to the feature, our Guest Dare is a monthly endeavor in which we invite an unsuspecting victim to read a book totally outside of their comfort zone.

This month’s guest is Liz (A.K.A The Liz) from the wonderful UK-based blog My Favourite Books which she runs with hubby Mark. Liz revealed that her most dreaded genre was Sci-fi and we promptly suggested that she should read Hyperion by Dan Simmons, one of Thea’s all time favorites. Liz agreed at first, but could not carry on (I will let her tell you all about it) and offered to read Principles of Angels by Jaine Fenn instead and since Thea recently reviewed Consorts of Heavens (a book in the same series), we said yes.

So, ladies and gentlemen , The Liz and her review of Principle of Heavens (and a giveaway). 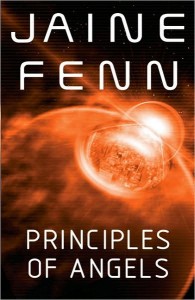 Summary:Khesh City floats above the surface of the uninhabitable planet of Vellern. Topside, it’s extravagant, opulent, luxurious; the Undertow is dark, twisted and dangerous. Khesh City is a place where nothing is forbidden – but it’s also a democracy, of sorts, a democracy by assassination, policed by the Angels, the élite, state-sponsored killers who answer only to the Minister, their enigmatic master.

Taro lived with Malia, his Angel aunt, one of the privileged few, until a strange man bought his body for the night, then followed him home and murdered Malia in cold blood. Taro wants to find the killer who ruined his future, but he’s struggling just to survive in the brutal world of the Undertow. Then an encounter with the Minister sets him on a new course, spying for the City; his target is a reclusive Angel called Nual.

Elarn Reen is a famous musician, sent to Khesh City as the unwilling agent of mankind’s oldest enemy, the Sidhe. To save her own life, she must find and kill her ex-lover, a renegade Sidhe.

Though they come from different worlds, Taro and Elarn’s fates are linked, their lives apparently forfeit to other people’s schemes. As their paths converge, it becomes clear that the lives of everyone in Khesh City, from the majestic, deadly Angels to the barely-human denizens of the Undertow, are at risk. And Taro and Elarn, a common prostitute and an uncommon singer, are Khesh City’s only chance . . .

Hi Ana and Thea – thanks very much for having me! Here’s my review of Principles of Angels, after I chickened out of reading Hyperion by Dan Simmons. My poor non-sci-fi-loving brain could not take it!

I picked up Principles of Angels as it’s been sitting on my bookshelf for ages now. Receiving the DARE from Ana and Thea clinched it. Not only did I have to read it for my own blog’s Summer Reads List, I get to come and play outside of my own sandpit for a change!

I will be the first to admit that I am not a fan of science fiction writing, hence the dare, but I have been told to amend my ways because I am losing out on some very good books out there.

I acquiesced to this and fell into Principles of Angels with great abandon. I can highly commend Ms. Fenn’s writing style. You couldn’t fault her creating two very engaging characters, Elarn and Taro. I was probably more interested in Elarn than Taro as I felt her character had been better developed and held more intrigue than Taro, the boy-whore.

The contrast between the two characters works well – Elarn is a renowned singer; she is graceful, competent, a lady, people like being around her. Taro on the other hand is rough, coming from the Undertow, whilst his speech patterns reflect this, as does his approach to life, where he is prepared to do anything to survive, even joining a gang and becoming addicted to drugs. Something else that I couldn’t quite wrap my head around was the language used when spoken, especially some slang bits. Instead of giving me a feel of the city, it’s social standing and the more dodgy characters and places in the novel, I felt alienated and I couldn’t bother figuring out what they meant as I had no frame of reference to work form.

I found myself hugely confused about Khesh, the City – it is almost a third mysterious character in the novel. Just enough information is given about why it is suspended above the arid world of Vellern. The City reminded me of every single stereotype you ever heard of when it comes to boomtown America or thirties Bangkok – anything could be had, several times over, even perversely, for a price. Tourists leave their staid homes to revel in Kesh’s apparently lawlessness where assassinations are the rule and Angels are highly respected for their skill and status within society. I found that the Topside was less well described compared to the Undertow but then realised after the fact that this is evident in Elarn and Taro’s characterisation.

The plot felt a bit slow at times and I found myself skipping certain sections as I was in danger of putting the book to the side as it just wasn’t holding my attention. I thought it was maybe because there was too much exposition when it came to the two characters, you get really up close and personal with especially Taro’s life and although it’s not a problem in most cases, he just doesn’t do that many exciting things! I came away thinking that the novel could entirely have been written from Elarn’s perspective and it would have been a completely different piece of work.

I am very much aware that I am very torn about Principles of Angels. I did enjoy reading it, but I didn’t love it enough to want to immediately pick up the second novel, Consorts of Heaven which, by all counts, is not a follow-up of Principles, but a complete standalone novel.

I would therefore like to offer the following: a copy of both Principles of Angels and Consorts of Heaven to the first person in the UK to email me at: myfavouritebooksatblogspot@googlemail.com . These books are not for me, I will freely admit that and they need a new home. This offer is open for one day only. If there are no takers, I’ll give the books away to a charity shop.

Thank you Liz for being brave and trying a book outside your comfort zone – and we are sorry that it didn’t work for you!

Next month in the Guest Dare: We dared Angie from Angieville to read Mr Impossible by Loretta Chase. 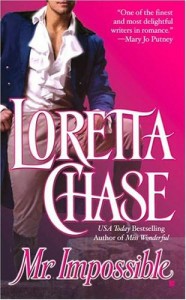