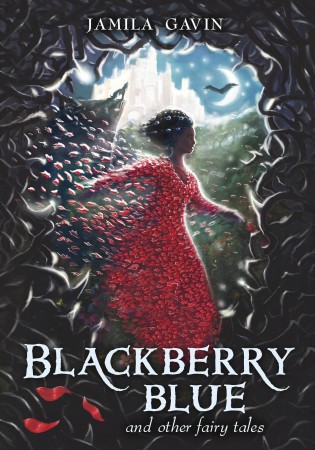 Here are six magical stories to thrill and enchant you. Watch Blackberry Blue rise from the bramble patch; follow Emeka the pathfinder on his mission to save a lost king; join Princess Desire as she gallops across the Milky Way on her jet-black horse.

These beautifully written and original stories will delight readers of all ages, and the stunning illustrations by Richard Collingridge will take your breath away.

Why did I read this book: I received a review copy of this book and the moment I opened the package I fell in love with it.

Blueberry Blue grew into the most beautiful girl anyone had ever seen.

This is a fairly common sentence that appears in fairytales. How many times have you seen it used with regards to a character described in this manner:

(Blackberry Blue’s) skin was black as midnight, her lips like crushed damsons, and her tightly curled hair shone like threads of black gold.

Rarely if ever, especially in the context of European fairytales. So this is the thrust behind Blackberry Blue: a collection of original fairytales in the tradition and thematic core of traditional European tales in which the author (as per her introductory words to the novel) hoped to create stories which:

(…) extended the European image, so that more diverse children could look at the heroes and heroines and say, “That could be me”.

Thus, the six stories in the collection all feature characters of colour from a myriad of backgrounds experiencing stories that white European kids have experienced for years. They are all original stories but still familiar in terms of the themes they explore such as the nature of joy, the dangers of envy, the importance of kindness and of family. There are tales of adventures and sacrifice, of loss and triumph, of love and hatred.

All six tales are good but two stand out: “Blackberry Blue”, a heart-warming story about love and kindness that follows Blackberry Blue as she battles the forces of evil to save the boy she loves; and “The Purple Lady” in which a boy named Abu undergoes a series of increasingly difficult tasks in order to save his missing sister.

Needless to say, I think Jamila Gavin has a worthy goal in creating this collection and the stories here are incredibly valuable – as well as beautifully written and illustrated.

Because me being me, there is always a “but”.

It is impossible for me not to comment on the fact that out of the six stories, four have male protagonists and only two have female main characters. This wouldn’t have been much of a problem because in fairness, the stories with male protagonists also feature female characters (be it a female companion, a sister or a mother or even a villain) had it not been for the fact that the stories with the boys are about brotherly love, love for music, love for adventures whereas both stories with the girl protagonists are stories in which the main female character falls in insta-love and their sole motivator is romantic love.

And inasmuch as they are beautiful stories, the fact remains that the stories about boys inevitably feature a much richer, wider scope than the two stories that feature female protagonists. I understand the tradition these stories are following and it’s imperative for me to stress that this is an important, essential, beautiful collection of stories with PoC characters but I also think that it is equally important for us to also question and interrogate the types of stories we tell when it comes to gender.

Notable Quotes/Parts: You can read the first pages online:

The Girl From Everywhere by Heidi Heilig: A Time Travel Project Review