Book Review: The Absolutely True Diary of a Part-Time Indian by Sherman Alexie

Title: The Absolutely True Story of a Part-Time Indian 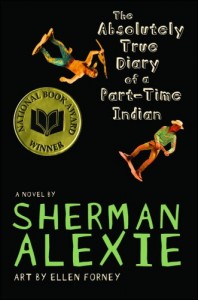 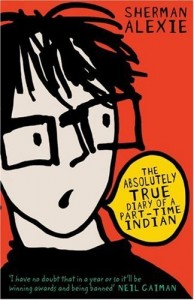 Sherman Alexie tells the story of Junior, a budding cartoonist growing up on the Spokane Indian Reservation. Determined to take his future into his own hands, Junior leaves his troubled school on the rez to attend an all-white farm town high school where the only other Indian is the school mascot. Heartbreaking, funny, and beautifully written, The Absolutely True Diary of a Part-Time Indian, which is based on the author’s own experiences, coupled with poignant drawings that reflect the character’s art, chronicles the contemporary adolescence of one Native American boy as he attempts to break away from the life he thought he was destined to live.

Why did I read this book: It has been recommended to me by many people. All the rave reviews. All the awards it won. Neil Gaiman.

Review: I know I am reading a good book when it simultaneously breaks my heart into tiny million pieces and makes me laugh as the pieces are put together – over and over again. The Absolutely True Story of a Part-Time Indian is one such book. I heard only good, awesome things about it, about the many awards it won and the Neil Gaiman quote on the cover only helped me picking it up. But I was not prepared for what I found and I don’t think anyone could ever be prepared for it. The book was first published in the US back in 2007 and is a first person, semi-autobiographical account of Arnold Spirit, Jr’s life as a Spokane Indian living in the Reservation with his family, and his ultimate decision of going to an all-white school just outside the rez in search for a chance to have a future. It is filled with hope to its brim even as hope is something that Indians are not supposed to have.

The heartbreaking starts on page 1 as Junior starts telling his story about being born with “water in his brain” and the resulting physical damage: ranging from over-sized head, hands and feet, bad eyesight to seizures, stuttering and lisping. Being a child with all the aforementioned is bad enough but you can just about get away with being “cute” but being a 14 year old teenage boy is unbearable. Especially when you are bullied, constantly beaten up (careful with the head!) and called a “retard”.

Junior also has forty-two teeth – ten more than normal, and if I thought my heart was breaking on page 1, it was on page 2 that I truly learnt the meaning of a heart shattered with RAGE:

I went to the Indian Health Service to get some teeth pulled so I could eat normally, not like some slobbering vulture. But the Indian Health Service funded major dental work only once a year, so I had to have all ten extra teeth pulled in one day. And what’s more, our white dentist believed that Indians only felt half as much pain as white people did, so he only gave me half the Novocain.

And it continues. Junior is dirty poor, his father is an alcoholic, as are most Indians in the reservation; no one looks into the future, his sister has been living in their basement for years. He is constantly threatened with physical damage by bullies (some of them, ADULTS) . His best friend is his dog Oscar who has to be put down by his father because they can’t afford to take him to the vet when he gets sick. It is not all sadness though, he does have a best non-canine friend in Rowdy, another teen whom he has been friends with since childhood, his grandmother and his drawings. You see, Junior loves to read and draw comics and wants to be a cartoonist one day:

I think the world is a series of broken dams and floods, and my cartoons are tiny little lifeboats.

His cartoons are inserted throughout the narrative and complement it perfectly sometimes being the much needed funny break to what is being described. 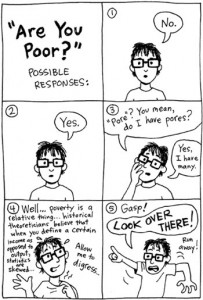 What is most impressive about the narrative: that all of the horrible, tragic, things that happen to Junior don’t ever come across as being there merely for shock value or drama. The worst (or the best part?) is how it comes across as natural, as normal, as you know, things that happen. Shrug, shrug move on. The style is as though you are deep in conversation with your best friend who might as well be telling you how he went to the grocery store to buy a bottle of milk. That is in itself genius: not only because the reading flows but also because the narrative itself is part of the story. As though Junior, in narrating the story in such an easy way has assimilated the one idea that might bring him down and has brought down his family and ancestors. That Indians are good for nothing and deserve what they have. Over and over again, Junior will say something that will show how ingrained the self-loathing is, only to try and get pass that. This, as much as facing racial problems, poverty is perhaps Junior’s most important challenge. I get a sense of purpose in the storytelling.

And how does Junior start breaking the vicious circle though? It starts this one day at school when he is given a new book except the book is not new -it belonged to his own mother. Filled with sense of foreboding, Junior throws the book and it hits his teacher. In the aftermath, the same teacher impresses upon Junior the need for him to GET AWAY. He enrols at the all-white school and he is the only Indian attending it, if you don’t count their mascot. Surprisingly, he has a harder time with his fellow Indians back at the Rez for making this decision than he has with the white kids. He soon makes friends, joins the basketball team and even gets a white girlfriend. But these things don’t come easy, there is guilt, violence, heartbreak as Rowdy won’t have anything to do with him anymore and a reality that keeps dragging him down but Junior? Junior will not give up.

This is a story about identity too: Junior is at once part of his tribe and not a part of his tribe and the way that struggle is handled is superb. I thought that the fact that the ideas are never shorthanded to Indians = Good (the poor Victims) and Whites=Bad (Ultimate Evil). In fact, I think one of my favourite quotes in the book is and the one I shall use to close the review:

Notable Quotes/Parts: I love this quote with all my heart because it is filled with TRUTH:

But we reservation Indians don’t get to realise our dreams. We don’t get those chances. Or choices. We’re just poor. That’s all we are.

Poverty doesn’t give you strength or teach you lessons about perseverance. No, poverty only teaches you how to be poor.

Additional Thoughts: This video is part Sherman Alexie reading from the book, a part that is HILARIOUS in which Junior and his geeky white friend talk about how books and reading give them boners. Then, he answers questions and talk about YA authors are welcoming and made of awesome.

Verdict: The Absolutely True Story of a Part-Time Indian is unique, raw, funny as hell. A triumph in storytelling, filled with heartbreak but also so much warmth and I can’t recommend it enough.