Title: Written On Your Skin

On the cover: It pains me, it pains me so, that another book that is so beautifully written has to suffer the ignominy of a cover such as this. I am not a fan. 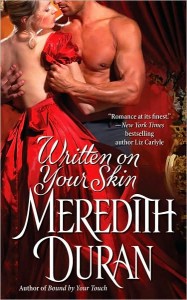 Stand alone or series: Stand alone but the book is set at the same as Bound by Your Touch and runs parallel with that book’s events.

Summary:
Beauty, charm, wealthy admirers: Mina Masters enjoys every luxury but freedom. To save herself from an unwanted marriage, she turns her wiles on a darkly handsome stranger. But Mina’s would be hero is playing his own deceptive game. A British spy, Phin Granville has no interest in emotional entanglements…until the night Mina saves his life by gambling her own.
Four years later, Phin inherits a title that frees him from the bloody game of espionage. But memories of the woman who saved him won’t let Phin go. When he learns that Mina needs his aid, honor forces him back into the world of his nightmares.
Deception has ruled Mina’s life just as it has Phin’s. But as the beauty and the spy match wits in a dangerous dance, their practiced masks begin to slip, revealing a perilous attraction. And the greatest threat they face may not be traitors or murderous conspiracies, but their own dark desires….

Why did I read the book: At this point in time, I will read anything Meredith Duran writes.

Written On Your Skin is the second book by Meredith Duran to be published in less than two months and it is equally as good, if not more, as its predecessor, Bound By Your Touch.

At its core Written On Your Skin is a simple story with a simple plot. Four years ago, in Hong Kong, A woman helps a man to escape certain death. He is indebted to her. Four years later, now in London, she requires his help in finding her mother.

What is complex is the characterisation of these two people. There is a story – a back story – for both characters and the author takes time to introduce us to them. Phin used to work as a spy for the British government, he did not pursue this career, but he had no choice when it was presented to him. This is what he was doing in Hong Honk those years ago – investigating Mina’s stepfather. He was caught, poisoned and due to Mina’s quick thinking, able to survive it. Four years later has finally become free of his superior, by inheriting a title and is making a new life for himself.

Mina, is the daughter of a mother who suffers through an abusive marriage. She is resolute that she would never go through something like this. Mina is smart but she hides behind a façade of frivolity because this is easier in handling people. This is how , in the 4 years between events, she becomes a successful business woman in the Americas. Then, when her mother goes missing and she realises this has to do with espionage, she thinks the only person who will help her is Phin. He is not happy to be brought back into the game.

Meredith Duran first sets each of the characters’ identity when they are apart so that the reader can fully appreciate what they become when together. One of the greatest aspects of a love story well told is that belief that the main couple belong together. That they are good people apart but they are better together. And this is what happens here.

I have said this before: Meredith Duran’s writing is sophisticated. I sustain it – there is elegance to her writing and it completely captivates me. She has a way with words that is entirely hers. The style of her storytelling, the manner in which this romance unfolds is far from being hurried or casual.

Phin was a spy. But the spy profession in this book is far from being taken lightly. The spies do not waltz with debutants – there are countries and lives at risk. It is a dangerous profession, a dark profession, one that has left deep emotional scars in Phin. I love this passage when he visits the house of an old friend where he apprentice map making before becoming a spy:

“In his father’s generation, they had counted nostalgia a disease. The mind was believed to rot on impossible longings; it fixated on a time that would never come again, and cannibalized itself by embroidering memory until it collapsed into fantasy. He could see the logic in it. This library felt like a sickness. The scents of paint and paper and polish and ink filled his chest and turned to stone. More wholesome than the odor of baking bread in the hall outside, they conjured safety, peace, knowledge, everything he had once taken for granted. Such sweet and easy lies.”

Because he is marked by what he has had to do in the name of his country, Phin has a dark disposition. It is interesting to observe that when Mina first saves him, the first thing he thinks is that she must be an agent as well and he asks “whose”. Mina replies simply that she is her own.

Such an interesting alien, concept for Phin – that of freedom to choose. And one that Mina has an obvious need to put across to him. They start the second part of their story at odds with each other – and with a lack of trust.

Once they realise they have to, they must, trust each other, is an entirely different relationship that unfolds before our eyes. One that will make both of them whole. Because what he couldn’t admit, not even to himself is how much she awes him. Because the fact that she does, and the reasons why she does goes straight to the point of who they are. Brilliant, manipulative, knowing how to use their assets to get what they want . But as much as Mina is true to herself and wishes only for someone who would recognise that in her and takes pride in what she can do, that is directly opposite to the shame Phin feels for those same qualities.

Deep down, they are the same – they dream the same dream of freedom, they work on instinct, and when they finally listen to it – those instincts – whoa. I will say no more as this is a story you will want to read for yourself.

As far as I am concerned, Meredith Duran is here to stay – she should have her name carved in that list of best romance novel writers.

Notable quotes/ Parts: Their journey to Providence. I shall say no more. Only that it is sigh-inducing, aw-worthy and what the hell, hot.

Verdict: Elegant prose and a deeply satisfying romance, the perfect combination. This is another fantastic book by Meredith Duran. I am now officially a fan girl.

Reading Next: One Week as Lovers by Victoria Dahl

Over at Kirkus: Scale-Bright by Benjanun Sriduangkaew