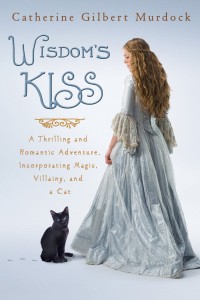 Princess Wisdom, known as Dizzy, longs for a life of adventure far beyond the staid old kingdom of Montagne.
Tips, a soldier, longs to keep his true life secret from his family.
Fortitude, an orphaned maid, longs only for Tips.
These three passionate souls might just attain their dreams while preserving Montagne from certain destruction, if only they can tolerate each other long enough to come up with a plan. Tough to save the world when you can’t even be in the same room together.
Magic, cunning, and one very special cat join forces in this hilarious, extraordinary tale by the author of Dairy Queen and Princess Ben. An incredibly creative tale told with diaries, memoirs, encyclopedia entries, letters, biographies, even a stage play, all woven together into a grand adventure.

Stand alone or series: Stand alone (but set in the same world as Princess Ben)

How did I get this book: Review copy from Netgalley

Why did I read this book: I have heard nothing but positive things about Catherine Gilbert Murdock’s book and keep meaning to read them. Plus, I have a weakness for epistolary novels and when I learned this one was one, I knew I had to read it.

This is the true story of the event known as Wisdom’s Kiss in which: a Kingdom was saved, hearts were broken, a Circus flourished, magical shenanigans were deployed and true love was found.

In the Kingdom of Montagne, Princess Wisdom wishes for a life of adventure but finds herself about to settle down and get married; Fortitude, an orphaned kitchen maid, awaits for her childhood sweetheart to return from his travels; Tips, a soldier, misses his love but has a secret he can’t share. Meanwhile, a villain is concocting a plan to steal a Kingdom.

Wisdom’s Kiss is written in epistolary format and the story is told via diary entries, memoirs, encyclopedia excerpts, letters, biographies and even a stage play. Tips (and his letters), Wisdom’s (and her diary) and Fortitude (and her biography) are the main characters and their lives and actions are intrinsically connected and are instrumental to the plot regarding the future of the Kingdom.

First of all, it needs to be said that my love for epistolary novels knows no bounds. I love this type of narrative and as such I was already predisposed to enjoy this book. And some of the entries were tremendously fun and clever. I had a kick of so many things in this book: fairytale connections, awesome villainy, and small things like the fact that Fortitude’s biography was called “ A Life Unforeseen” which I found so amusing considering that Trudy was a seer. I particularly enjoyed Tip’s letters because they were so earnest and had an element of unreliability (because of the secret he was keeping and how he kept erasing words and replacing them, the significance of this is huge, as we come to learn) but above all, I loved the Memoirs of the Master Swordsman Felis El Gato (written in his own hand, all Truths verified – all Boasts Real) because they were downright hilarious.

Having said that, this narrative form is very difficult to pull off, specially in terms of character development. Not to mention that it requires a lot of rapport and careful attention from readers as, more often than not, character development works subtly in between the lines, and things that are left unsaid are as important as the things that are said (or written). Although most of the characters were fun, I felt that the majority of them were only surface-deep. Plus, there was definitely an element of insta-love which I came to despise of late. The story definitely works in terms of plot though, especially when all threads come perfectly together in the end.

Ultimately Wisdom’s Kiss is a short, sweet plot-driven tale of adventure and romance and I had great fun reading it. More than that, this introduced me to a new author and I am quite curious about other books by Catherine Gilbert Murdock and will be reading Dairy Queen – which I hear, is fab, soon.

Notable Quotes/ Parts: Loved this entry on Wisdom’s diary in which she rebels about the Montagne’s way of naming people after virtues:

And violet of course is a lovely flower and a lovely color too, but most importantly it is not a virtue. No one in the history of Montagne would ever say “Oh, Violet, for once can’t you just behave violetly?”

Additional Thoughts: If you read this book and liked the format; or if you are already a fan of this narrative form, and want more, I can highly, HIGHLY recommend Jaclyn Moriarty’s Ashbury/Brookfield series of Contemporary YA, all in epistolary format. They are AWESOME and in my opinion, not nearly talked about enough. 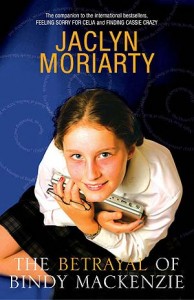 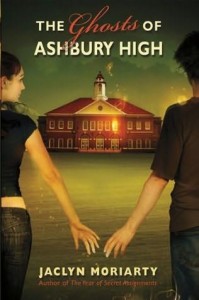 The first three in the series, Feeling Sorry for Celia, Finding Cassie Crazy and The Betrayal of Bindy Mackenzie have been reviewed here (no spoilers) and the fourth, The Ghosts of Ashbury High here.