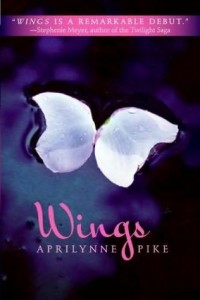 Stand alone or series: First book in a planned series.

Why did I read this book: I had been eying Wings for a while in my local bookstore – and eagerly pounced on a copy for our Young Adult Appreciation Month. The stunning cover, the overall strong reviews, and the intriguing book summary had me at hello.

Summary: (from HarperTeen.com)
Laurel was mesmerized, staring at the pale things with wide eyes. They were terrifyingly beautiful—too beautiful for words.

Laurel turned to the mirror again, her eyes on the hovering petals that floated beside her head. They looked almost like wings.

In this extraordinary tale of magic and intrigue, romance and danger, everything you thought you knew about faeries will be changed forever.

Wings is the third title in our SUPERNATURAL SUMMER book feature from Harper Teen. This week we will bring you five different books by five different authors, including interviews, articles and giveaways.

Laurel has never had much in common with other teenagers. For one thing, she has been home-schooled for all of her life, and is something of an introvert. In her sophomore year, Laurel’s parents move and decide that it is time for her to attend a public school, and Laurel realizes how different she really is from her classmates. It’s not just her home-schooled, “hippie” background or peculiar vegan and sprite-only diet; nor is it just because of her beautiful, willowy looks or her affinity for the woods and sunlight. One day, Laurel discovers a welt on her back that simply won’t go away…and it grows, blooming into a pair of stunningly beautiful, wing-like petals. Frightened and completely alone, Laurel turns to her new friend David for help and comfort, and she learns just how different from everyone else she really is.

Aprilynne Pike’s debut novel Wings has received rave reviews from YA critics, and has garnered comparisons to Stephenie Meyer’s uber-popular Twilight saga (even scoring a cover quote from Ms. Meyer) – which is apt. Wings shares the same enchanting otherworldly feel with Twilight, as well as the awkward, pretty new girl in town premise – but that’s where the comparison ends. Why?

Because in this reviewer’s opinion, Wings outshines Twilight in every possible way.

Wings is a lush, beautifully written novel that encompasses romance, an imaginative spin on the realm of faerie, thrilling action and a strong heroine that would mop the floor with Bella Swan. Fifteen year-old Laurel sets herself part from the people she meets at school, feeling claustrophobic in the air conditioned classrooms and covered cafeterias – but instead of passively going with the flow and trying to fit in, she prefers to sit outside in the sunlight on her own. A few reviews seem to take issue with the book’s “slower” start, dealing with the day to day musings and uncertainties of Laurel – but this appeals to me, as a reader and grounds Laurel as a tangible, sympathetic character. When David talks to her, she welcomes his friendship and later confides in him when she cannot tell her adoptive parents exactly how different she is from everyone else – but she’s very careful not to lose herself in David’s comfort, or let her life become defined by their relationship. With David’s support and quiet strength, Laurel comes to grips with exactly who and what she is in a very nice twist on the faerie myth, and also a refreshing twist on the traditional ‘girl falls for supernaturally sexy boy’ story. I have to admit that I loved Laurel’s mettle and her positive attitude; despite the immense changes she is going through (and growing a giant flower out of one’s back is a pretty dramatic change!), Laurel keeps her wits about her. It is Laurel that discovers what her true parentage is; it is Laurel who recognizes the danger that threatens her family, and who saves them all from danger. As a strong, non-passive heroine, Laurel totally rocks.

As a romantic novel, Wings is completely, winsomely enchanting. There’s a love triangle, which is to be expected in line with the Twilight comparisons – but the very human and calmly dependable David juxtaposed against the emotional, supernatural charmer Tamani are much more fleshed out as characters and more desirable (in my opinion) than the tawdry Edward and Jacob. I think what I appreciate the most about this blossoming love story is that it is not founded on obsession or unrealistic premises – Laurel is cautious with her emotions, and does not recklessly pin her entire self-worth on her truest of true loves. Both characters have their very different appeals, and the triangle is far from concluded – sure to draw some intense David or Tam debates. At this point, the triangle is engaging and fresh – I just hope Ms. Pike can keep the appeal going in the next few books without slipping into contrivance (I’m always a little ary when starting into a love triangle story. Somehow I always end up rooting for the losing guy.)

So far as plotting and world-building are concerned, Wings is deftly written and freshly original. I won’t spoil the particular twist, but suffice to say that I was intrigued by Ms. Pike’s take on faerie. There’s action and danger aplenty in this novel as well, as a mysterious stranger tries to buy Laurel’s family land and threatens her family with mortal consequences. Murderous plots, death-defying escapes, magic and romance abound in Wings – what’s not to love? I finished Ms. Pike’s lovely debut in a single sitting, and cannot wait for the next installment in the series.

Taking a deep breath, she blinked away the dark spots and stepped toward the mirror.

She didn’t even have to turn to see the new development. Long, bluish-white forms rose over both shoulders. For a moment Laurel was mesmerized, staring at the pale things with wide eyes. They were beautiful — almost too beautiful for words.

She turned slowly so she could see them better. Petal-like strips sprouted from where the bump had been, making a gently curved four-pointed star on her back. The longest petals — fanning out over each shoulder and peeking around her waist — about eight or nine inches long — spiraled around the center, filling in the leftover space. There were even a few small green leaves where the enormous flower connected to her skin.

All of the petals were tinged a dark blue at the center that faded to the softest sky blue in the middle and white at the ends. The edges were ruffled and looked eerily like the African violets her mother painstakingly grew in their kitchen. There must have been twenty of the soft, petal-like strips. Maybe more.

Laurel turned her front to the mirror again, her eyes on the hovering petals that floated beside her head. They looked almost like wings.

And, as always, Harper Teen’s Browse Inside below gives a glimpse at the first third of the novel. Check it out.

Additional Thoughts: Recently, Aprilynne Pike announced that the rights to Wings have been sold to Disney for a feature film! Although I can’t say I’m pleased with the rumored Miley Cyrus as Laurel (though incredibly popular, Miley is a bit too…abrasive for my impression of the willowy yet strong Laurel), it is pretty exciting news. Congrats to Ms. Pike!

Also, make sure to stick around, as we have a guest blog and giveaway from Aprilynne Pike later today!

Verdict: A lush debut novel with a heady blend of beauty, romance and danger, I very much enjoyed Wings. Highly recommended, and I cannot wait for the upcoming sequel.

Reading Next: Evernight and Stargazer by Claudia Gray